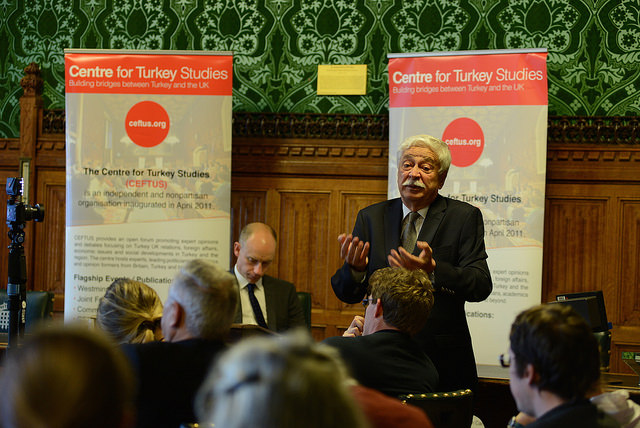 This public forum was kindly hosted and co-chaired by Stephen Kinnock, Labour MP for Aberavon. Keynote speaker was Dr Yilmaz Esmer, Professor of Political Science at Bahcesehir University in Istanbul. The event was held on 24 May 2016, in the House of Commons and it focused on the idea that a strong correlation exists between citizens’ mindsets and the nature of the political regimes. This line of thinking can be traced back to Plato, and emphasises the crucial role of the prevalence of democratic values for the long-term sustainability of a democratic system of government. In recent years there has been a steady decline in Turkey’s rankings on all dimensions of democracy and rule of law. The public forum examined the relationship between the state of affairs as expressed in studies published by international organisations and the political culture of Turkish society.

Stephen Kinnock opened by illustrating the need to look at how Turkey has been for the last number of years and where it is going in the way of values, beliefs, and the political landscape. Dr Yilmaz Esmer said that Turkish democracy is no longer a joking matter. In fact, when one speaks of Turkish democracy, the word should be in quotation marks. It was become a process of selection, not election, in which one candidate has been elected unanimously. Dr Yilmaz then discussed Turkey’s position in democratic ratings, which give an idea about Turkey and the international community in terms of civic liberties, freedoms, and political rights. In the Rule of Law Index, Turkey is ranked eighty. In the Economist Intelligence Unit Democracy Index (2015) Turkey has dropped significantly in recent years. It shows that the political culture and functioning of government are closely correlated. What is responsible for this?, Dr Yilmaz asked. Dr Yilmaz said that people’s mentality is a more important factor than institutions, leaders, laws, and constitutions.

The mentality, mindset and political habits of society are related to the well-functioning of the government. Culture matters, and it matters a lot, Dr Yildiz claimed. Quoting Welzel & Ingleheart (2009), he said ‘democracy is fragile when it is a democracy without democrats’. There are severe problems with how Turkish democracy has been practices, Dr Yildiz explained, and not just legal problems, leadership problems, or problems of mindsets. When asked if it was good to have a strong leader who does not have parliament or elections, 60% of people answered in the positive (good or very good). 60% of people would never sign a petition, compared to only 10% who have signed a petition in the past. Turkey also gave extremely low levels of tolerance and gender equality. In regards to interpersonal trust there was only a level of 12%. Inter-personal trust is extremely important, Dr Yildiz explained, to democratic system of government and trust in elections. Dr Yildiz expressed that his findings suggested that religion was a possible factor in this outcome.

The keynote speech was followed by a Q&A session which was chaired by Mr Gareth Winrow.

Prof Dr Yilmaz Esmer received his B.A. degree from Yale and his Ph.D. from Stanford Universities in the US. His research and publications focus on political culture,  comparative values, religion (Islam in particular) and politics, voting behaviour, and Turkish society and politics. He has been the principal investigator for Turkey of the World Values Survey project since 1990 and has served on the Executive Committee of the World Values Survey Association.  Currently, he is the vice-chair of the Scientific Advisory Board of WVSA. He has also conducted surveys in Turkey for international surveys programs such as the European Social Survey, European Values Study, Transformation Research Unit and the Comparative Study of Electoral Systems. He has served as Provost at Bogazici University and Rector (Vice Chancellor) at Bahcesehir University in Istanbul. Prof. Esmer is a member of the Science Academy in Turkey. Dr Esmer has authored numerous books and articles. Recent publications include The International System, Democracy and Values (2009) (co-edited with Thorleif Pettersson). Uppsala, Uppsala University Press; “Diversity and Tolerance: Rhetoric versus Reality” (2010) in Janssens, Maddy, et al., eds., The Sustainability of Cultural Diversity: Nations, Cities and Organizations. Cheltenhaum, U.K. and Northampton, MA, USA: Edward  Elgar. 131-155; “Elite and Mass Values: Religion as an Intervening Factor” (2010) in Van Beek, Ursula J., ed., Democracy under Scrutiny: Elites, Citizens, Cultures. Opladen and Farmington Hills, MI, USA: Barbara Budrich Publishers. 221-240; “Democracy, Civil Society and Islam” (2013) in Dekker, Paul, Loek Halman and Joep de Hart, eds. Religion and Civil Society in Europe. Springer; “Economic Crisis and Political Polarization: A Challenge to Civic Culture?” (2015) Taiwan Journal of Democracy, vol. 11, no 1, 129-46.