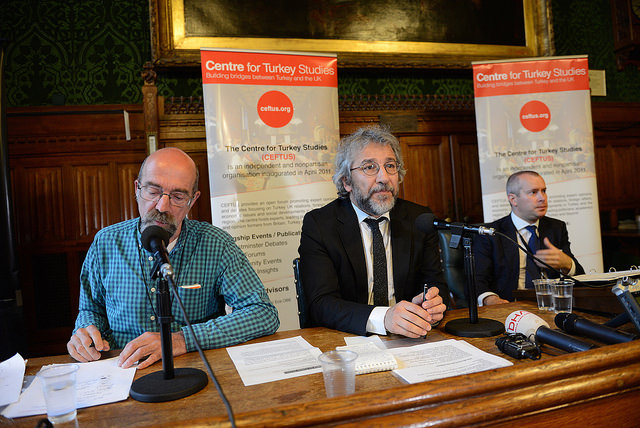 CEFTUS was pleased to welcome journalist and author Mr Can Dundar to the House of Commons for a talk on the nature of politics in modern Turkey, especially with regards to press freedoms and the EU. Dundar began by talking about the desperate nature of press freedoms in Turkey, continuing on to talk about his own experiences in imprisonment, and he went on to talk much about the power dynamic between Turkey under the Justice and Development Party (AKP) and the EU, concluding that the greatest enemy in Turkey, as elsewhere, was fear; and left the audience with the hopeful promise that this fear could be overcome.

Lord Jeremy Purvis of Tweed took the chair and first welcomed Mr Dundar to the house, taking the opportunity to praise him for his role in the continued operation of the oldest quality newspaper in Turkey among others. Mr Dündar then took the floor, beginning by offering his sincere condolences to the victims of the terrorist attack in Istanbul this week. He then went on to talk about press freedoms in Turkey, noting that it is the biggest prison in the world for journalists, surpassing even China in that regard. He spoke of the difficult conditions for journalism in the country, talking from his own experiences of having to undergo not only arbitrary imprisonment and solitary confinement but also an assassination attempt.

Dundar spoke at length about how the power dynamic between the EU and Turkey and about the dirty backroom deals that often characterise this relationship. He noted that Turkey was in a sense holding the EU hostage by threatening to bus migrants across the Bosporus in exchange for billions of dollars of aid and visa-free travel to the Eurozone, but also holding the migrants themselves hostage by retaining them in Turkey against their will. A point of contention for Dundar was the way in which the EU compromised on its own principles in order to maintain this relationship, failing to keep its own standards of openness and human rights with regards to Turkey. Dundar spoke at length about the backroom deals and agreements between the two sides and condemned an EU concession to delay the release of a report criticising Turkey’s lack of respect for press freedoms until after the Turkish elections in November 2015 in the strongest terms, calling it a “shameful, filthy agreement”.

Dundar then went on to frame the current conflict in its historical context, describing how Turkey had the unique position of having fought against European powers in the war of liberation of the early 1920s in order to create a republic based on Western values and secularism. Ataturk, Dundar said, knew that he would win the military battle – but that the real war was cultural, and the hardest fight was inculcating the new Turkish youth with those progressive values to create a new Turkey. That, he said, was now being put at risk by an Ottomanist government that sought to revive the ‘old’ Turkey at all costs. Turkey, Dundar said, was a bridge between civilisations – geographically as well as culturally – and losing the Turkey of Ataturk in favour of the Turkey of Erdogan would be a great blow to the West and to the world. He mentioned the difficulty of bringing Turkey back from its current position on the brink, as it is a country that now runs towards the east, and not the west.

In conclusion he emphasised that although things looked bleak, there was a Turkey outside of Erdogan’s Turkey – a Turkey that supported press freedoms, democracy, and the respect for human rights. This, he hammered down, was the Turkey that the West must be more active in supporting. Echoing Roosevelt, he articulated that fear was the greatest enemy in this struggle, increasing fear parallel with increasing nationalism was responsible not only for many of Turkey’s woes but also for the Brexit phenomenon. He finished by imploring the West to not let Turkey fall to fascism, as the whole world would lose one of its most wonderful countries.

Lord Purvis opened the floor up for questions, and Dundar generously took a good amount of time to address each one. Some of the topics that were asked included the Brexit referendum, the beleaguered Turkish opposition, and the current near-civil war state of Turkish Kurdistan. Dundar spoke at length on these issues, noting the somewhat amusing response of Erdogan to the EU referendum in taking to national television to call for Turkey’s own referendum – despite not being in the EU. Dundar admitted that the status of the opposition in Turkey was “very difficult” but repeated his calls that the West, especially the Western media, do more to draw attention to these issues in order to isolate Erdoğan and show the Turkish communities abroad the true nature of his despotism. Dundar also spoke compassionately about the Kurdish struggle, stressing the importance of peace talks and negotiations.

Summarised by Will TG Miller

Mr Can Dundar is a journalist, columnist and author. He is currently editor-in-chief of Cumhuriyet daily. He studied at London School of Journalism in the UK and holds a Master of Arts in Public Administration from Middle East Technical University (ODTU). He was a lecturer of Cultural Studies at Ankara University Faculty of Communication and at ODTU Political Sciences Public Administration. He worked for several newspapers and magazines including Yanki (1979-1983), Hürriyet (1983-1985), Nokta (1985), Haftaya Bakıs (1987), Soz (1987-1988) and Tempo (1988). Dundar began his TV career at state television TRT. He has made and presented several programmes and documentaries including ‘40 Dakika‘, ‘Canli Gaste’, ‘Sari Zeybek’, ‘Golgedekiler’, ‘Aynalar’. He has over 30 books published.

The EU and Brexit, Where does Turkey Stand?