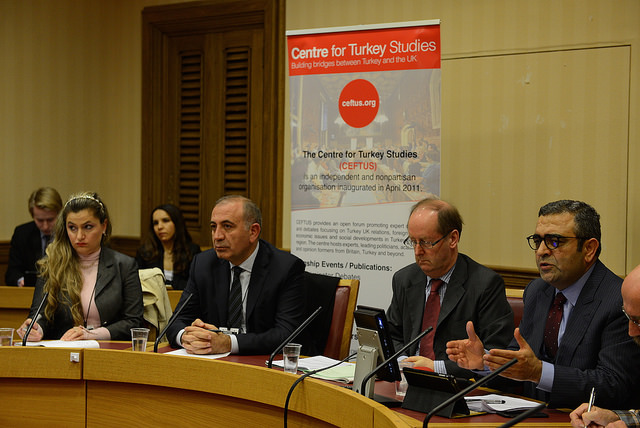 Photos of the Event

Dr Sezgin Tanrikulu began by discussing the Kurdish issue, stating that the conflict between the Turkish state and Kurdish militants the Kurdistan Workers’ Party (PKK) is presently at its worst, even more more so than it had been in the 1980s and 1990s. He stated that there had been great hope that the Turkish government and PKK would reach a peaceful settlement in June last year at election time, but that tensions between the Peoples’ Democratic Party (HDP) and the Justice and Development Party (AKP) had grown and led to renewed clashes in which many combatants and non-combatants have died. He argued that since March 2013, the AKP had only approached the peace process with the PKK for its own political advancement, adding that AKP politicians had said that to work on this process without any political benefit would be pointless.

Dr Tanrikulu stated that the deaths of policemen in July 2015 had allowed the AKP government to resume the fighting. He continued stating that the government has no plan to end the conflict, arguing that while the Prime Minister had unveiled a ten point plan in Mardin, this in Dr Tanrikulu’s view was without substance.

He added that the CHP had looked at this issue from two angles, employing parliamentary measures and urgently establishing a committee, as the Kurdish youth is no longer looking to Ankara for a solution.

Dr Tanrikulu stated that in Turkey’s current political climate, a consensus on a new constitution was not possible. He added that 76% of the Turkish population would not want to be neighbours with people who are members of a different party to them, showing that polarisation is extremely severe at this time.

On the issue of Islamic State (IS), he stated that the AKP government did not pay enough attention to the large numbers of people going into Syria from Turkey to fight. He stated that he has asked up to 60 questions in parliament about IS activities and had received no replies from the government, and added that the courts had dropped a case against an IS member, for the reason that it was not possible to ascertain whether IS was a terrorist organisation. He stated that between 2012 and 2015, the government had ignored IS and was only recently investigating the organisation. He added that following the bombing of Suruc in July 2015, he and other MPs had given names and details about IS members, but that these had not been acted upon

Mr Gursel Tekin opened discussing Middle East-wide political issues, emphasising their roots in the Iran-Iraq War and the efforts of different powers, including the US and Russia to establish hegemony in the region. He added that sectarian conflict, and intervention in Libya and Iraq have exacerbated the problems present since 2003. He continued, stating that the CHP had communicated its concerns to current the Turkish Prime Minister, who was then Foreign Minister. Mr Tekin continued discussing the Arab Spring, stating that his party had invited members of like-minded parties to Turkey. He expressed the view that foreign powers had focussed on energy related concerns rather than human ones, which has helped cause refugees to come to the shores of the European Union.

He continued, adding that big countries are responsible for many of the problems in the Middle East due to their concerns about Iran and the wider Arab world, which could mean that conflict will become the status quo of the region.

These speeches were followed by a question and answer session.

Dr Sezgin Tanrıkulu is a Member of Parliament for Istanbul. He is a human rights lawyer and co-founded the Diyarbakır Human Rights Association. He studied Law at Istanbul University, completed his Master’s in Public Law Dicle University and his PhD in Social Sciences at Kultur University. He served as Head of Diyarbakir Bar Association between 2002-2008. In 1997, Dr Tanrikulu won the Robert F. Kennedy Human Rights Award.