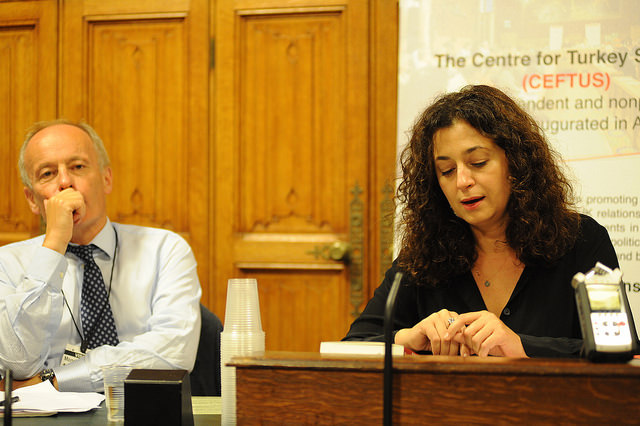 In a Westminster debate hosted by John Woodcock MP, the award-winning journalist and novelist Ece Temelkuran spoke to a large audience about her new book, ‘Turkey: The Insane and the Melancholy’.

Sharing a personal account of her family history, Ms Temelkuran discussed current affairs – including the tumultuous aftermath of the 2016 coup attempt – in the context of the historical pattern of coups d’etat in Turkey. She described Turkey as being founded on the principle of ‘a marriage of moderate Islam and democracy’, but recent Turkish history has demonstrated the model does not work as well as hoped. She described how ‘a polarisation’ has formed in Turkish society that has led to ‘disgust towards each other’. She diagnosed the two camps as ‘those with the government and those with the others’, and identified herself, politically, in that latter category.

She went on to explain this background as the cause for her writing the book, an exploration of the history of Turkey divided into three parts. Taking the perspective of a woman in Turkey, rather than a political figure, she described how she used the book as an opportunity to explore the history of Turkey through different cultural groups and characters. She then gave a brief description of Turkey in the last ten years – a country where ‘the mainstream media has been dominated by the discourse of the AKP [Justice and Development Party] and its surrounding intellectuals’ – and then touched on the final portion of her book, where she makes her ‘humble predictions’ of the future of Turkey in general and the Kurds in particular.

Ms Temelkuran also touched on the difficulties of describing the Turkish situation to foreigners, both professionally (she is ‘not allowed to write in [Turkish] newspapers’) and personally (‘it seems like you are making a complaint about your country to other people’).

Following her short speech on the background and content of her book, Ms Temelkuran then fielded a number of questions from the audience, on topics including the Turkish state’s foreign policy, Islamism, and cultural identity.
Summarised by Jack Swan