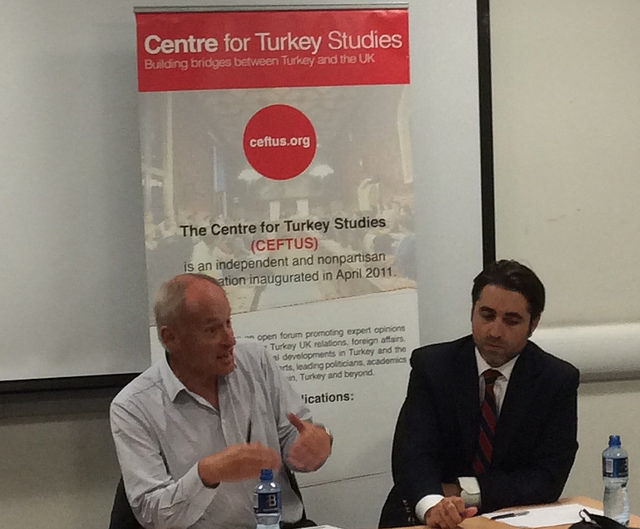 The Centre for Turkey Studies was glad to welcome Dr Ciddi to London for a talk on the post-coup consensus in Turkey, now that well over a month has elapsed since that event. The event was kindly chaired by Bill Park of King’s College.

Dr Ciddi began by presenting the coup within its Turkish context, and framed it outrightly as a ‘national trauma’. As it was still an unfolding event, its full repercussions could not be ascertained; but the significance of it in the minds of all Turks and in contemporary Turkish political history should not be underestimated.

He proceeded to respond to most of the frequently asked questions on the issue of the coup. What exactly had happened? Why had it failed? What were its implications, in both the short term and the long term?

Dr Ciddi explained that while it was clear that factions of the armed forces had indeed engaged in the coup, there was no clear consensus as to who or what organised it. None had yet owned up to it, unlike the Turkish coup of 1980 – but Ciddi did entertain the notion of some degree of involvement on the part of the Fethullah Gulen movement.

He went on to suggest that the coup had failed because Erdogan broke the attempted media blockade and addressed the public through FaceTime, mobilising them to get out into the streets and ‘resist’ the occupiers. Yet there were other issues with the failed coup that raised doubts; the fact that only around 5000 soldiers took to the streets in a country of over 70 million should be enough to arouse suspicion.

The consequences of the coup were laid out in detail, as Dr Ciddi went on to talk about the prospect of constitutional reform, including the legalisation of the death penalty, and then went on to address the elephant in the room, that being the shocking number of individuals incarcerated, deposed, purged, or otherwise ‘disappeared’ on suspicions of involvement with the Gulenist movement. The crackdown had been wide and indiscriminate, and as well as media outlets and universities, many hospitals and schools also found themselves the target of state sanctions.

Finally, Dr Ciddi addressed the issue of foreign policy and the possibility of a new paradigm of relations between Turkey and the United States in the post-coup milieu. The United States, he pointed out, had taken around 48 hours to condemn the coup, showing a degree of reluctance to take a stance against it outright. This had given Turkey significant cause to question the steadfastness of its foremost Western ally. Ciddi finished by mentioning the emergence of a new conventional military conflict in northern Syria as Turkish tanks rush into Jarablus, the longer consequences of which could still not be known.

Summarized by Will TG Miller

Sinan Ciddi is an expert on Turkish domestic politics and foreign policy. He obtained his Ph.D. from the School of Oriental and African Studies, University of London in 2007 in the field of Political Science. Ciddi continues to author scholarly articles, opinion pieces and book chapters on contemporary Turkish politics and foreign policy, as well as participate in media appearances. In addition to his teaching and research responsibilities at Georgetown, Ciddi also serves as the Executive Director of the Institute of Turkish Studies. Ciddi was born in Turkey and educated in the United Kingdom. He was previously an instructor at Sabanci University between 2004-2008 and completed his Post-Doctoral Fellowship at the same institution between 2007-2008. Distinct from his articles and opinion editorials, Ciddi’s book titled Kemalism in Turkish Politics: The Republican People’s Party: Secularism and Nationalism (Routledge, January 2009) focuses on the electoral weakness of the Republican People’s Party. Between 2008-2011, he established the Turkish Studies program at the University of Florida’s Center for European Studies.