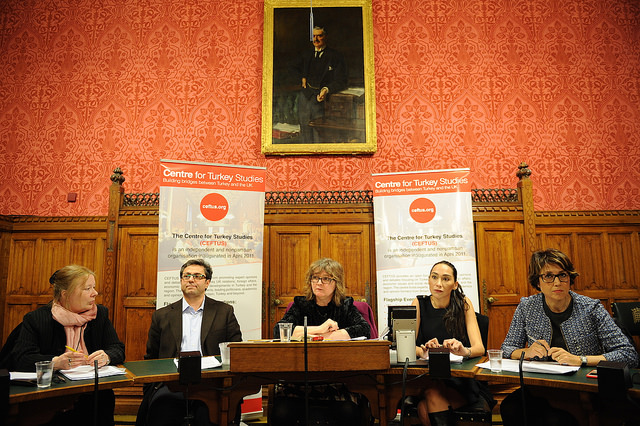 The Westminster Debate was kindly hosted by Keith Vaz, Labour MP for Leicester East. The keynote speakers for the debate were Ms Gulseren Onanc, Assembly Member of the Republican People’s Party (CHP), Ms Sinem Arslan of the University of Essex, Dr Janroj Keles of Middlesex University, and Dr Elizabeth, President of the University and College Union (UCU). The debate was chaired by Sara Whyatt, freelance consultant for Freedom of Expression.

The Westminster Debate discussed academic freedom in Turkey. This discussion stemmed from a series of events which took place in Turkey, beginning in January 2016, which saw attacks on academic freedom and restrictions on freedom of speech. In January 1,400 academics signed a petition, organised by Academics for Peace, calling for an end to ‘Turkey’s deliberate deportation of Kurdish people’. In the days and weeks that followed 27 academics were detained by the police over allegations of ‘terror propaganda’, they and others were labelled as ‘traitors’, others were investigated by police, slandered by the government, and lost their jobs. Although there has been disagreement surrounding the content of the petition in question, many from the Turkish opposition and international organisations were critical of the government’s response and its violation of its obligation to protect freedom of expression under the Universal Declaration of Human Rights.

Ms Gulseren Onanc, a politician and a women’s rights activist, began by giving an overview of the infrastructure and political landscape in Turkey, which she sees as seminal in this debate. Although there are four main political parties in Turkey, she stressed that almost total executive power lies in one party and its president, the Justice an Development Party (AKP) and President Erdogan. This monopoly on power leaves little room for any participation from the opposition and civil societies, who have different positions on the Kurdish issue than the AKP. The current government seek to increase secularism and security, and to exclude the Kurdish people. They are ignorant to critical voices, Ms Onanc stressed, and refuse to listen to calls for a re-establishment of the peace process. The main challenges to overcome, according to Ms Onanc, were the need to abolish the existing polarisation between parties and to establish trust with politicians. Additionally, there is a need to regain the problem solving capacities that have been lose through the exclusion of critical voices. The solutions proposed by Ms Onanc is to be found in civic initiatives, by active citizens discussing and establishing solution, by the courage of the people. Freedom of expression has been violated, she stated, and everyone needs to contribute and cooperate in order for solutions to be realised.

Ms Sinem Arslan, a signatory of the petition, highlighted the human rights abuses in Turkey that cannot be seen in the mass media. Like Ms Onanc, she related to the gross misconduct of government authorities, and asked for a return to the peace process as a solution. She told of how she had seen her peers and fellow signatories subjected to smear campaigns, referred to as ‘terrorists’ and ‘pseudo-intellectuals’, accused of inciting people to violence. The solution, according to Ms Arslan, there is a need for increased international support and legal processes, an increase in the international discussion about what can be done in solidarity with Academics for Peace.

Dr Janroj Keles began by referring to the history of the Turkish government who have been doing the same thing over and over again, yet expecting a different result. In Turkey, he argued, there is a politics of fear that is characterised by extra-judicial killings and collective punishment of the Kurdish people. According to Dr Keles, the peace process was a guise used by the government to gain hegemonic domination of the Kurds through state institutions. Freedom is central to the core of academic knowledge, yet in Turkey this freedom is countered by government brutality, racism and discrimination. The actions taken against the academics in question hold no legitimacy or legality, Dr Keles argued, they are extra judicial and illegal. Unless action is taken, he stressed, there would be increased negative impacts on scholarly and critical research. Young academics will be scared and leave the country, which will ultimately result in a loss of production of critical knowledge and limited access to critical debates.

Dr Elizabeth Lawrence was the final speaker. The principle of academic freedom, she stressed, is vital for democratic societies; the ability to question and debate political and social alternatives strengthens society. Every individual should be entitled to the ability to question without risking their liberty. To be critical, and to question, is the heart of what it is to be a university, and this principle has been internationally recognised. Additionally, she stated, it is our internationally duty to protest when such rights are infringed, to take action against oppressive measures, ask ‘why?’. There such be an end to the prosecutions and dismissals which have taken place in Turkey, the answer of the government should never be to attack those who disagree with or question you. The academics in question should be reinstated, their rights respected, and there should be a return to legality. This, she argued, would see a step towards a sustainable peace in Turkey, and an end to oppression; individuals should have the right to question what is happening without risking a loss of liberty or employment.

Dr Elizabeth Lawrence is President of University and College Union (UCU). She has served as an National Executive Committee (NEC) member and national negotiator for UCU and one of its predecessor unions, NATFHE (National Association of Teachers in Further and Higher Education). She was Regional Secretary for Yorkshire and Humberside Region from 1993 to 2013. As UCU President she is particularly concerned to support members in tackling problems of work intensification and casualisation of employment. She is employed as a Principal Lecturer in Sociology at Sheffield Hallam University. Her teaching and research activities are in the Sociology of Work and Employment and Equality/Diversity.

Dr Janroj Keles is a research fellow at Middlesex University, working on ethno-national conflicts, migration, diaspora and statelessness. He is the author of the book titled Media, Diaspora and Conflict Nationalism and Identity amongst Turkish and Kurdish Migrants in Europe.

Ms Sinem Arslan is a PHD Candidate and Graduate Teaching Assistant at Department of Government at University of Essex.