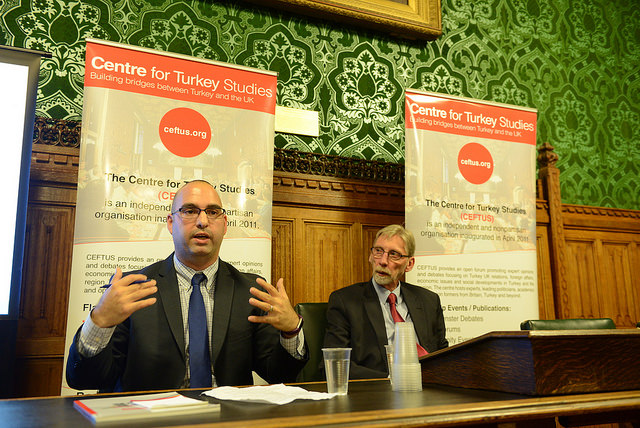 George Howarth MP opened the event by discussing the momentous events that have been occurring in Turkey and Europe at present including both the 15th July Coup attempt and the vote in Britain to leave the European Union. He also added that Turkey plays a crucial role in Europe by bridging the gap between the continent and the Muslim-majority world.

Mr Sidar argued that Turkey’s present condition is not sustainable, and that the recent coup attempt displayed just how vulnerable Turkey is in all three of these areas. Economically for instance he noted that Turkey has been downgraded by two leading financial agencies. He added that in security terms, Turkey faces threats from the followers of the Islamic cleric Fethullah Gulen who infiltrated Turkey’s security agencies and brought about the coup attempt, the Kurdistan Workers’ Party (PKK) insurgency and Islamic State (IS).  Mr Sidar argued that as a result of the unsustainability of this situation a political change is necessary in the country. He added that an increasingly authoritarian streak had been adopted by the Justice and Development Party (AKP) government since 2009 which threatened Turkish democracy.

Elaborating further on security problems, Mr Sidar argued that IS terror attacks between June and November 2015 saw the AKP win a parliamentary majority in the snap election. He added however that economic difficulties have been what has caused Turkish voters to vote for changes throughout Turkey’s political history.

On Turkey’s democratic situation, Mr Sidar added that 152 journalists are presently behind bars in Turkey, and also discussed the lack of public trust in Turkey’s institutions and that these have been undermined by infiltration. He stated in addition that the Kurdish issue is the biggest challenge to the security of Turkish democracy, and supported greater decentralisation in the government apparatus for the Kurdish region as a means of addressing this problem. He argued that the current purges of elected mayors there had also been a mistake by the AKP government.

Mr Sidar stated that Turkey requires strong democratic and legal institutions and a strong military to maintain peace and stability in its neighbourhood and at home, especially given the situation and poor relations with Iraq at present. He added that the purges had undermined Turkey’s security apparatus, removing a number of high ranking military officers and causing a lack of F16 jet pilots, meaning that Turkey’s operations in Syria and Iraq lacked personnel. He contrasted Turkey’s foreign policy at present with the successes made by the AKP up until 2010, noting for instance that Turkey had been involved in brokering peace deals between Israel and Syria in 2008. He placed Turkey’s taking a broadly pro-Sunni approach to the Arab Spring especially in opposing the Assad regime, and not doing enough to combat IS, which ultimately led to multiple terror attacks carried out by cells that were established in Turkey as a result.

On the Turkish economy, Mr Sidar stated that growth was strong until 2009 as a result of its following the IMF programme. He added that between 2009-2012 however, the government grew over confident as a result of the sense of security created by this growth and Western media outlets referring to Turkey as an economic rising star in comparison with the US and EU which were in recession. Mr Sidar referred to this as a fragile success,  which has slowed down, seeing unemployment reach record highs of 13%. Mr Sidar argued that this unsustainable economic situation will lead to political change in the country, and suggested that structural reforms to both the economy and political institutions. He predicted that as a result of the historical tradition that when the economy is strong, the governing party tends to do well electorally, but suffers when the economy is weaker, as occurred in June 2015, that the AKP will be forced to make the political changes that its representatives alongside the opposition talk about.

Cenk Sidar is the founder and CEO of Sidar Global Advisors (SGA), a Washington, DC-based global macro research and strategic advisory firm that has been assisting top financial institutions, governments and multinational corporations investing in emerging/frontier markets since 2009. In November 2015 elections, Sidar was a MP Candidate from the main opposition, Republican People`s Party (CHP). Since 2012, Sidar has been advising the leader of CHP on foreign policy and economic issues and represented the party in various international platforms.

Sidar has written for, been interviewed by, and worked with the world’s leading newspapers and media organizations, including the Wall Street Journal, New York Times, CNBC, Bloomberg, Foreign Policy, CCTV and Al Jazeera. Sidar has also addressed audiences around the world, including at Carnegie, Bard, Cornell, Tufts, Johns Hopkins (SAIS) and CFR. Sidar holds an MA degree in international economics and international relations from Johns Hopkins University’s School of Advanced International Studies (SAIS) in Washington, a postgraduate degree in European studies from SAIS’s Bologna Center in Italy, and a BA degree in business administration and international relations from the Istanbul Bilgi University.  In 2012, Sidar has been selected as one of the top 99 foreign policy leaders under 33 in the world by the Diplomatic Courier and the Young Foreign Policy Professionals. He is a member of the Johns Hopkins University SAIS Advisory Council, Atlantic Council, Turkish Social Democracy Foundation (SODEV), Atlantik-Brucke e. V., the European Young Leaders Program, the Jean Monnet Program, the Project Interchange Alumni, and the American Academy of Achievement. He is fluent in English and German.