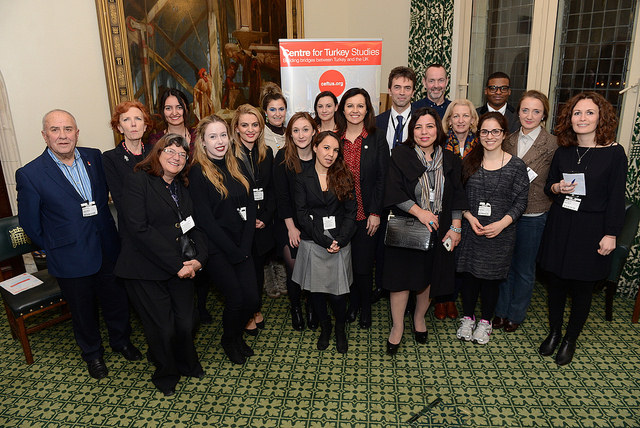 On March 2nd 2016, in the lead up to International Women’s Day, The Centre for Turkey Studies hosted the Women’s Rights and Achievements Reception in the House of Commons. The reception was kindly hosted by Caroline Flint, Labour MP for Don Valley, with additional speaking from Baroness Jan Royall of Blaisdon and Tom Blake, Liberal Democratic MP for Carshalton and Wallington.

Women of contemporary Turkey have achieved many political and social rights, up to globally accepted women’s rights standards. Nevertheless, they have had to cope with traditional patriarchal values in Turkey’s male-dominated society. As recently as March 6th, it was reported that female protesters rallying for women’s rights in Istanbul were fired at with rubber bullets by police. In Turkey, more and more women are participating in public life and occupy senior positions, including some female representation in the Turkish parliament. Although violence against women is on the increase in Turkey, and sexist discourses dominate Turkey’s political and social spectrum, women throughout Turkey, with many grassroots movements, protest against inequalities that they encounter in their everyday lives. This CEFTUS event celebrated the achievements of women of all ethnicities and religions from Turkey and their invaluable contributions to Turkey’s progress in many fields. The reception welcomed all, particularly those women originating from Turkey, with the aim to bring women and men together to raise awareness of women’s rights.

Labour MP Caroline Flint opened the reception by providing a background into the current political landscape in Turkey, some achievements of Turkish women as well as some of the struggles they face. She referenced the fact that in the 2015 Turkish elections a record number of women – 81 – were elected to parliament. This surge in women’s political representation is in line with the theme for this year’s International Women’s Day of gender parity; the hopes for 50/50 representation by 2030. Ms Flint drew attention to parallels between the situation of women in the UK and Turkey. In the UK two women every week die as a result of domestic violence. In Turkey, there are huge concerns that violence against women is increasing. In 2010 fourteen times more women were murdered than in 2003. Ms Flint lamented that no more recent figure was available for her to discuss, as these figures are no longer published. In regards to employment, Ms Flint noted that in the last ten years, women’s employment in Turkey has dropped from 35% to 25%. However, more people, especially women, are speaking up. Ms Flint highlighted solidarity in Turkey, in which women are helping other women to become businesswomen. In the most senior ranks of Turkish business, women hold a quarter of board seats in the biggest companies.

Additionally, women managers often out-earn their male counterparts. Perhaps, Ms Flint suggested, we in the UK could learn something from this, in a country where the gender earning gap is increasing. The conversation, Ms Flint stressed, should be about putting women at the heart of the agenda; we need conversations about how we can ensure that we support our sisters in Turkey, and how we can come together as sisters in the UK to promote women. There is always more work to be done.

Baroness Jan Royall spoke to the reception of her recent visit to Diyarbakir, in Southeastern Turkey. She extended her support to the women of the Turkish and Kurdish communities, especially those living in the curfew areas in Southeastern Turkey. In such areas, Baroness Royall said, democracy, the rule of law, and the fundamental freedoms to which every human being is entitled, are not being fully respected. There are fundamental violations of freedom in Kurdish areas. Baroness Royall spoke of her meeting with a female co-mayor in Diyarbakir, who was under investigation for publicly speaking out on the need for a de-centralised system of government. At the time of her visit here were twenty four elected representatives in prison, with an additional thirty under investigation.

Baroness Royall spoke of the bravery of the women she met from curfew areas, areas in which residents cannot leave, as the state believe that they are PKK supporters or members. Baroness Royall called for the need of the state to respect fundamental human rights and UN obligations. Whilst the UK is a friend of Turkey and wants Turkey to thrive, Baroness Royall stressed that as a friend of Turkey, we have a responsibility to be a critical friend. Everyone must work together, for a peaceful solution to the crisis in Turkey.

Tom Brake, Liberal Democratic MP for Carshalton and Wallington stressed that when it comes to gender equality, where there is a will, things can be done. He gave the example of Scotland, in which they have agreed that five top seats will be reserved for women. Issues faced by women in the UK are not that different from those faced by women in Turkey. In Southwest London, Mr Brake said, the number one violent offence is domestic violence, a prominent problem in Turkey as well. Whilst we have seen a greater recognition of this problem, Mr Brake stressed that recognition does not mean resolve, and there is still a great amount to be done. Our role in the UK is to ensure that Turkey is held accountable for human rights abuses. Mr Brake praised Turkey for its role in dealing with the refugee crisis and also praised the Kurds for their role in fighting against Daesh in the Middle East, one of the greatest contemporary threats to women’s rights.