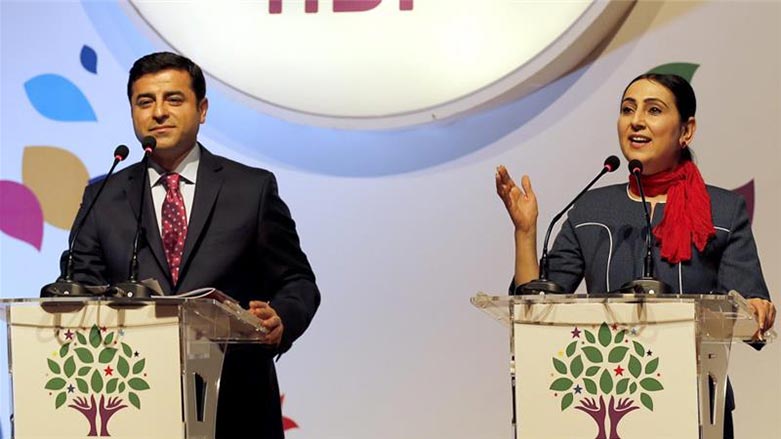 Briefing on the uncertain future of the HDP

The crackdown on the pro-Kurdish Peoples’ Democratic Party’s (HDP) with the arrest last week of its leaders may create an opening in Turkey’s political landscape, likely benefitting the government electorally, and may worsen the country’s security situation.

Last week, the co-chairs of Turkey’s pro-Kurdish, left-wing alliance, the Peoples’ Democratic Party (HDP), were arrested along with other leading MPs from the party. The HDP has subsequently withdrawn its MPs from parliamentary commissions and assembly groups, but not, contrary to other reports, from parliament altogether. The HDP’s entry onto the political scene in 2014 was seen as a new opening for liberal politics and a further step towards a peaceful resolution to the Kurdish conflict.

However, the Kurdish conflict has since reignited and the party’s opponents have played on its perceived associations with militant groups. These arrests were possible after the country’s largest opposition party, the Republican People’s Party (CHP), backed the government’s bill to remove immunity for MPs from the constitution. The HDP has lost out in the post-coup nationalist consensus in Turkish politics.

The HDP’s future is uncertain. The party currently plans to maintain its popular platform, remain a political party and continue promoting its agenda. The HDP will still likely put forward candidates if it can. Popular support may even have grown for the group since the arrest of its leaders. Even with its leaders in jail, the HDP could conceivably cross the 10% threshold again if allowed the chance.

However, these events may mark the beginning of the end of a political landscape in Turkey in which the HDP could effectively stand. This would alter the dynamics of Turkish politics. In the last two elections the HDP took more than the 10% threshold needed to field MPs and was polling at around 10% to 11%. If the party fails to pass the 10% threshold at the next elections, millions of votes will be open for the taking.

If the HDP is unable to stand, it may revert to the previous Peace and Democracy Party (DBP), strong in the Kurdish regions. The HDP’s liberal voters, outside of the Kurdish regions, may give their votes to the BDP. The CHP will have difficulty courting them following its support for lifting parliamentary immunity. Liberals may give their votes to smaller parties which have little to no impact on the distribution of seats in parliament.

As the HDP, the party’s votes counted for proportionally more seats in parliament. Crossing the 10% threshold gives parties proportionally more seats; if unable to cross the threshold more seats are reallocated to larger parties. In Turkey’s current fractious media environment, forming a new party will be difficult. The BDP, for example, might not be able to build off HDP’s momentum. Without a platform, at the next election, more seats would go to other parties, most likely the ruling Justice and Development Party (AKP), set to be the biggest beneficiary of these events. At the very least, the AKP is likely to increase its share of the nationalist vote following this move.

In 2014, a peace process was underway to resolve the Kurdish conflict. The formation of the HDP was greeted as a further development towards a durable peace. Those days seem far off now. A reignited Kurdish conflict now entering its second year has claimed hundreds of lives and shows no signs of abating. Young Kurdish people with anti-state leanings in Turkey’s south east will see these arrests as further evidence that they cannot trust the government. With every image of devastated buildings and MPs being dragged off by police, support for armed militant groups grows. The devastation wreaked on Turkey’s south east has sown the seeds of future discontent among the region’s young demography. These arrests will likely add to this youthful anger and deny it a non-violent outlet.