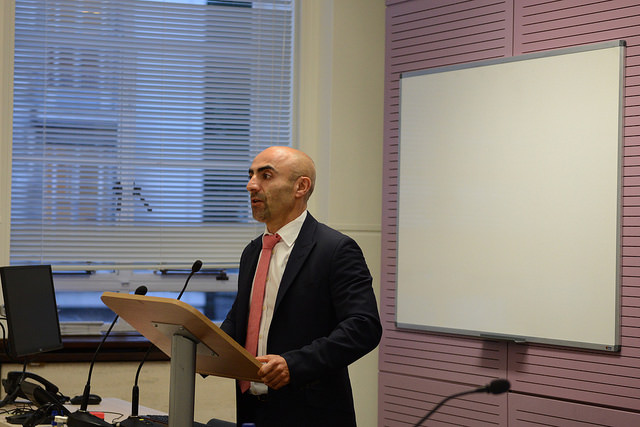 ‘The New Sultan: Erdogan and the Crisis of Modern Turkey’

Soner Cagaptay, distinguished author and director of the Turkish Program at the Washington Institute, came to SOAS to join the Centre for Turkey Studies in launching his new book, ‘The New Sultan: Erdogan and the Crisis of Modern Turkey’. The event began with opening remarks from the chair Tahir Abbas, Senior Research Fellow at RUSI, after which Mr. Cagaptay introduced the book, putting it in the context of his previous work on Erdogan and the Justice and Development Party (AKP).

He argued that under Erdogan, the AKP had worked to transform Turkey’s economy and the next step now required wholesale reform of the political system, guaranteeing freedom of religion for Turkey’s pious population, while ensuring freedom from religion for the country’s secularists. Mr. Cagaptay argued that it was no longer possible for Erdogan and the AKP to deliver such changes, and instead Turkey’s president was seeking to transform the country in his own image, much like its founder Mustafa Kemal Ataturk.

To explain how Erdogan sees Turkey and sees himself, Mr. Cagaptay said he had sought to delve further into Erdogan’s upbringing and the forces that shaped his life growing up as an outsider from a religious family.  Mr. Cagaptay then gave a brief background of Erdogan’s political career, explaining how he came to power under the perfect storm of Turkey’s political and economic problems in the late 1990s. Ever since, Erdogan and the AKP had carefully maneuvered by extending an olive branch to some sections of Turkish society while taking on another, before moving against each in turn.

Mr. Cagaptay argued that this had now put Erdogan in a difficult position, with the president worried that any attempt to relinquish his power would see his political enemies successfully unite against him. This situation is compounded by the fact that Turkey’s young people, particularly those who grew up in the AKP period are turning against him, voting in large numbers against his proposed constitutional changes. With no obvious route back, Erdogan is likely to become even more authoritarian with the growing likelihood of violence as his electoral record begins to slip.

Following Mr. Cagaptay’s closing remarks there was a lively question and answer session that touched upon issues of Turkey’s EU accession, foreign policy and economy. Mr. Cagaptay argued that Erdogan was unlikely to end Turkey’s application to join the EU as it helped guarantee investor confidence, but with growing apathy on all sides, Turkey’s accession process was unlikely to move forward. However, Turkey’s strategic location means it will always be a crucial part of Europe’s economic and political security. Turkey’s failures in Syria are also mean that it is highly unlikely to leave NATO, having learnt that it is not yet in a position to challenge Russia in its geopolitical objectives.

Soner Cagaptay is the Beyer Family fellow and director of the Turkish Research Program at The Washington Institute. He has written extensively on U.S.-Turkish relations, Turkish domestic politics, and Turkish nationalism, publishing in scholarly journals and major international print media, including the Wall Street Journal, Washington Post, New York Times, Jane’s Defense Weekly, Foreign Affairs, Atlantic, New Republic, and Newsweek Türkiye. He has been a regular columnist for Hürriyet Daily News, Turkey’s oldest and most influential English-language paper, and a contributor to CNN’s Global Public Square blog. He appears regularly on Fox News, CNN, NPR, Voice of America, BBC, and CNN-Turk. A historian by training, Dr Cagaptay wrote his doctoral dissertation at Yale University (2003) on Turkish nationalism. Dr Cagaptay has taught courses at Yale, Princeton University, Georgetown University, and Smith College on the Middle East, Mediterranean, and Eastern Europe. His spring 2003 course on modern Turkish history was the first offered by Yale in three decades. From 2006-2007, he was Ertegun Professor at Princeton University’s Department of Near Eastern Studies.

Dr Cagaptay is the recipient of numerous honors, grants, and chairs, among them the Smith-Richardson, Mellon, Rice, and Leylan fellowships, as well as the Ertegun chair at Princeton. He has also served on contract as chair of the Turkey Advanced Area Studies Program at the State Department’s Foreign Service Institute. In 2012 he was named an American Turkish Society Young Society Leader.

Briefing on Turkey’s relationship with the Iraqi Turkmen community