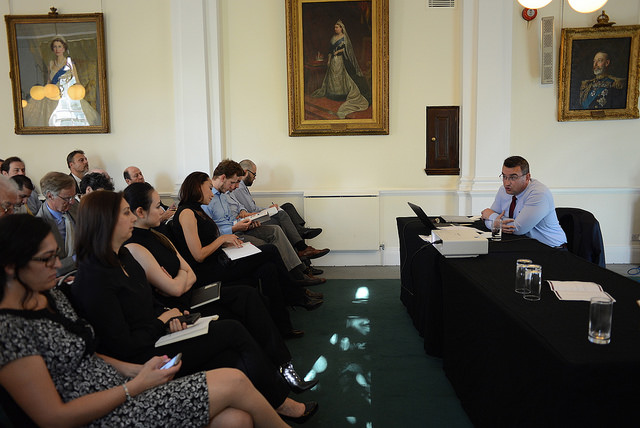 The Centre for Turkey Studies (CEFTUS) in partnership with the Royal United Services Institute (RUSI) organised an exclusive event with Dr Metin Gurcan on 22 May 2017.

Dr Gurcan characterised Turkey as a politically-divided country in a liquid security environment. He spoke about the multi-faceted threat faced by Turkey currently, noting that it had three distinct enemies, the PKK, FETO and extremist Salafi groups. Dr Gurcan recommended taking different approaches to tackling each threat. He noted that Turkey’s security forces had increased their operations against extremist Salafi groups in 2017.

Dr Gurcan explained that Turkey was going through a process of civilianisation of its military, increasing civilian oversight and management in the wake of last year’s attempted coup d’état. He identified some of the difficulties in this process and outlined the two competing approaches to implementing civilianisation, namely transferring power to the centre or diffusing power.

The changing landscape in Syria and divisions within the PKK were areas that Dr Gurcan saw as worth paying attention to in the near future. Dr Gurcan went on to provide in-depth answers to a number of questions from the audience.