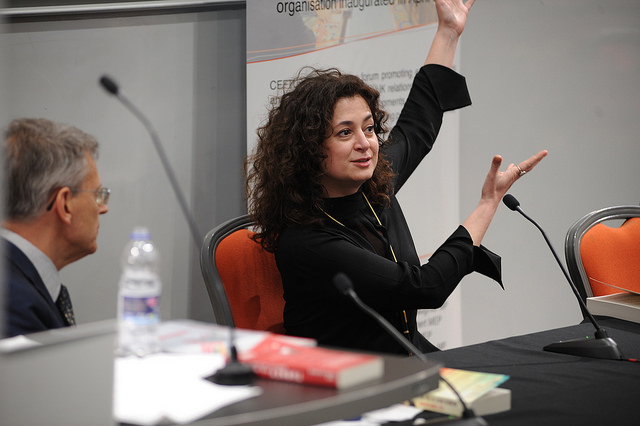 Writing as a survival tool in these “interesting times”

Ece Temelkuran, famous journalist and novelist, spoke at a talk at the School of Oriental and African Studies (SOAS), organised by CEFTUS in partnership with SOAS Turkish Studies and SOAS Kurdish Society. The event was an open forum discussion and Temelkuran presented her new novel, Women Who Blow on Knots. Temelkuran described the process of writing the novel, whilst living in Tunis in 2012, during the tumultuous events following the country’s first post-revolution elections.

The title comes from a phrase in the Koran, “Beware women who blow on knots: the sign of a witch” (sura 113). The novel deals with the experience of being a woman in the contemporary Middle East. Temelkuran talked about her relationship with literature and went on to cover a number of political themes that have influenced her writing of this and other novels.

Temelkuran discussed the events of the intervening years since the writing of the novel, identifying the rise of modern populism and the recent referendum in Turkey as key turning points, both for Turkey, and for the world. Temelkuran sees populism as a threat and believes that changes in politics are changing the way people relate to their countries of origin.

Temelkuran charted her frustrations with politics in Turkey and the wider world and how she engaged with this through writing. She discussed how she finds literature to be both a retreat from and a way to navigate the turbulent times in which we live. She also expressed her concern at the what she considers to be rising levels of misogyny across the world, adding that she fears it is women who will bear the burden of impending political crises.

Ece Temelkuran is one of the Turkey’s best known novelists and political commentators, and has been published in The Guardian, The New York Times, New Statesman, Frankfurter Allgemeine and Der Spiegel. She has lived in several countries such as Lebanon, Tunisia, France and the UK while writing her novels. She was a visiting fellow at Saint Anthony’s College, University of Oxford. Her recent novels “Banana Sounds”, “Women Who Blow On Knots” and “The Time of Mute Swans” have been published in several languages. During her 20 years as a journalist, she was ranked as Turkey’s most-read writer on several occasions. She has been rated as “the one of the 10 most influential people in social media” on two occasions. She has given the “Freedom Lecture” as a guest of Amnesty International and the Prince Claus Foundation. She has among given speeches at Oxford University, the London School of Economics, Harvard University and the House of Commons in the British Parliament, among many other locations. She recently appeared on BBC’s Hard Talk and Imagining The New Truth series. She divides her time between Istanbul and Zagreb.

The Kurdish Society at SOAS aims to bridge students with Kurdistan’s culture, language and political discourse. We are keen to promote the academic discipline of Kurdish Studies in organising seminars, conferences, presentations by PhD students, journalists, scholars and politicians of the wider Kurdistan region and the world.