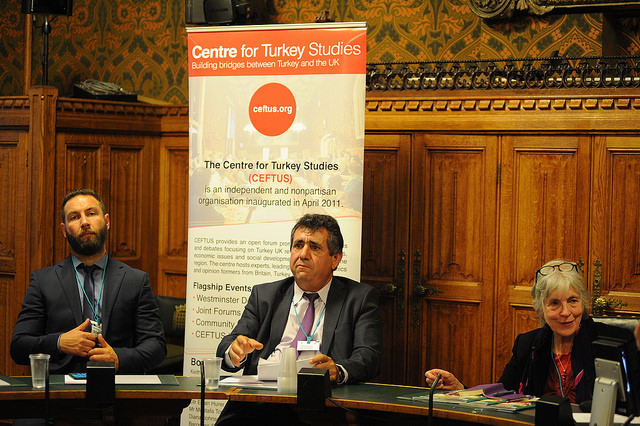 The Centre for Turkey Studies (CEFTUS) in partnership with the Friends of Cyprus hosted a public forum with Sener Elcil, General Secretary of KTOS, the Turkish Cypriot Primary Teachers Trade Union. The event was hosted by Fabian Hamilton, Labour MP for Leeds North East and chaired by Mary Southcott, Coordinator of Friends of Cyprus. Khalid Mahmood MP was also present at this event.

Elcil said that understanding the history of Cyprus was important to understanding its current state. Elcil said Turkey’s policy of population transfer was illegal and was damaging northern Cyprus economically and culturally. He said under the AKP government many mosques had been constructed in northern Cyprus, despite it having a fairly secular culture. Elcil also talked about the problem of money laundering.

Elcil stated that the referendum in Turkey had created a deep division within the community and created an unstable environment within Turkey. Elcil believes Turkey’s President Recep Tayyip Erdogan may seek to settle the Cyprus issue to show that the presidential system work and can benefit many.

The presentation was followed by a question and answer session. The High Commissioner for the Republic of Cyprus to the United Kingdom of Great Britain and Northern Ireland also gave a small speech to add to Elcil’s presentation.

Sener Elcil has been the General Secretary of KTOS, the Turkish Cypriot Primary Teachers Trade Union, since 2001. He supported Turkish Cypriot Leader, Mustafa Akinci from the day he decided to stand. He works on education, with teachers, pupils and schools in the north of Cyprus, but also with Greek and Turkish Cypriots in the Association for Historical Dialogue and Research, and for the establishment of the Home for Cooperation in the Buffer Zone. In 2009 he was elected to  represent Cyprus as a whole on the Executive Board of the European Trade Union Committee for Education (ETUCE).  He has since made arrangements to alternate with his equivalent Greek Cypriot teacher trade union leader. He has led the Turkish Cypriot Trade Union Platform to both the European Parliament and the UK Parliament.  Last year he won the 2016 European Citizen’s Prize awarded by the European Parliament. He was also awarded a prize with his colleague and friend Christos Efthymiou for their work together in the Bicommunal Peace Initiative in which capacity they have visited the two Cyprus Leaders, Nicos Anastasiades and Mustafa Akinci, and leaders of the Cypriot political parties. He has worked to get left-wing parties in the north of Cyprus to work together including the Social Democratic Party whose representatives addressed a CEFTUS meeting. The setting up of the Education Technical committee last year reflects the importance of education to the future of Cyprus. This year he has backed the platform to urge the 100,000 Turks living in Cyprus to vote No in the presidential referendum but is aware that many Cypriots believe that a Yes in the Referendum is better for a Cyprus settlement. He is in the UK to be awarded another prize from the Teachers Union, NASUWT and brief people about what is happening in Cyprus and the peace talks.

Briefing on Turkey’s referendum and the future of Turkish politics