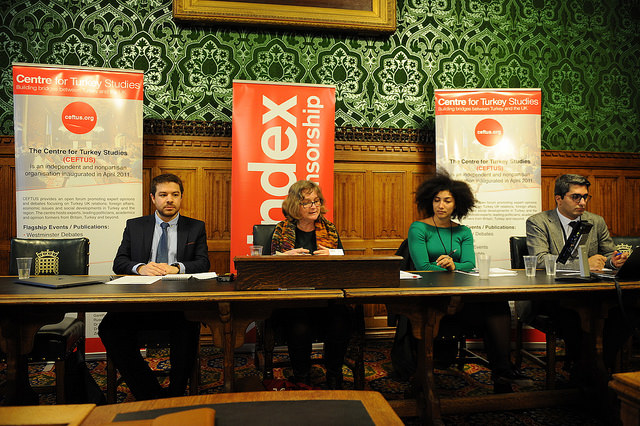 The Centre for Turkey Studies (CEFTUS) and Index on Censorship hosted a public forum with Special Adviser to the Foreign Affairs Select Committee Guney Yildiz, award-winning Turkish-British technologist Alp Toker and Index on Censorship’s Head of Advocacy Melody Patry. This event was hosted by Neil Coyle, Labour MP for Bermondsey and Old Southwark and was chaired by former Deputy Director of PEN International, Sara Whyatt.

Whyatt opened the event by welcoming the participants and detailing their backgrounds, before speaking briefly on the results of the recent referendum in Turkey.

Guney Yildiz began his presentation by outlining the challenges faced by Turkey’s political actors during the referendum campaign, focusing on President Recep Tayyip Erdogan in particular. Yildiz noted a similarity in how narrow the result of Turkey’s referendum was and the result of last year’s EU referendum vote in the UK.

Yildiz stated there was a significant difference between the coverage enjoyed by the ‘yes’ campaign, which received 475 hours of media coverage, compared to the ‘no’ campaign, which had 45 hours of coverage. Yildiz pointed out that the referendum represented a significant moment in the AKP’s electoral history, as the party lost votes in big cities such as Istanbul, Ankara and Izmir. These losses, Yildiz claims, have led to concerns within the AKP.

The so-called presidential system voted on in the referendum will not come into effect until 2019 but, Yildiz says, re-structuring of the Turkish State has already taken place. Yildiz added that the creation of posts such as Deputy Ministers, who are directly responsible to the presidential palace, is one such example of this. Yildiz stated the re-structuring goes beyond Erdogan’s ambitions but that what Erdogan is doing fits within the re-structuring. Yildiz stated that the coup attempt, the Gezi events and other regional insecurities have all lead to a weakening of Turkey’s institutions, apart from the Turkish Intelligence Service.

Yildiz expressed his disagreement with the term ‘polarised’, adding that he believed Turkey was a fragmented and multi-polar, rather than polarised, country. Yildiz then explained that Erdogan is more nationalist than most nationalist figures in Turkey at present, voicing anti-western feelings which, Yildiz claimed, appeal to almost everyone one in Turkey except for the Kurds. He went on to state that one of the biggest challenges for Turkey was the Kurdish issue, but that this issue goes well beyond President Erdogan.

Melody Patry began her presentation by discussing the environment in which the referendum took place, particularly with respect to the level of freedom of expression. She said that the period between last year’s coup attempt and the referendum had been bad for freedom of expression in Turkey, although she claimed that even before last year’s attempted coup Turkey’s record on freedom of speech had not been particularly good.

Patry said many who had been working in Turkey on solidarity with journalists are now being charged with having produced terrorism propaganda. She added that these charges are especially concerning given the recent discussion about re-introducing the death penalty.

Patry said that the conduct of the referendum had not met the Council of Europe’s standards, due to the fact that freedom of expression had not been guaranteed. Patry added that the ‘no’ campaign had not been given a platform during the referendum.  She also speculated that intimidation efforts and the mass arrests of journalists may have influenced the result.

Alp Toker noted the high turnout for the referendum, which he said suggested a strong engagement with politics in Turkey. He commented on the fairness of the climate in which the referendum took place, adding there were various viewpoints and perspectives on this. Toker discussed the work of his organisation Turkey Blocks and its projects with Index on Censorship.

He explained that mass censorship of communication can often be a cover for violations of human rights. Toker added that when there is no internet, there can be no communication, which restricts freedom of expression.

Toker spoke about the concern that during the referendum the internet would be shut down to influence the vote. He added that Turkey Blocks monitored the situation and collected a large amount of data covering most of the country. He said his organisation concluded that the data were clear and that no internet shut down took place.

Toker concluded his presentation by stating that the referendum took place in an insufficiently democratic environment, as the media coverage did not reflect the views of the entire population. He added that one form of censorship leads to others. Toker said these problems could not be solved by foreign groups or interference from the West.

“Alp Toker and Turkey Blocks’ work is important because it is going to have an impact not just in Turkey but across the world” – Anab Jain, TED Fellow, Designer and co-founder Superfluxx.

Index on Censorship and Melody Patry

Index on Censorship is a nonprofit that campaigns for and defends free expression worldwide. Index on Censorship publishes work by censored writers and artists, promotes debate, and monitors threats to free speech. The organisation believes that everyone should be free to express themselves without fear of harm or persecution – no matter what their views.

Melody Patry has been on numerous delegations to Turkey, provides research and analysis for Index’s policy formulation and works in building relationships with stakeholders to support the organisation’s domestic and international programmes. Previously she worked as a political adviser for the European External Action Service and as writer and videographer supporting human rights NGOs in Egypt.