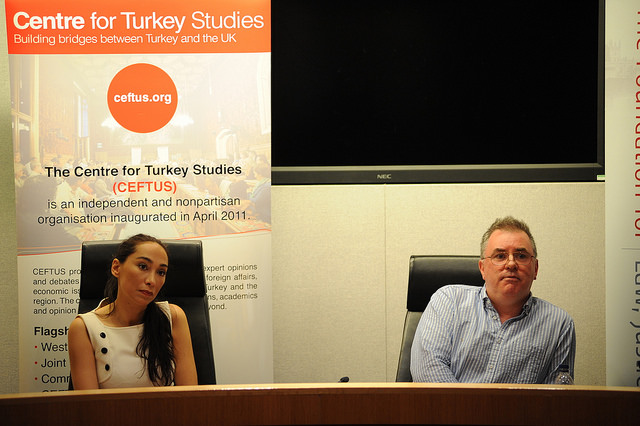 The Centre for Turkey Studies (CEFTUS) in partnership with the Oxford-based Foundation for Law, Justice and Society (FLJS) hosted a public forum with Dr Bill Kissane, a political scientist and historian, and Associate Professor in Politics at the London School of Economics.

The event, held at the headquarters of Unite the Union, focused on the then-imminent referendum on Turkey’s constitution and was kindly chaired by Sinem Arslan. Arslan introduced Dr Bill Kissane and talked about his past work. Phil Dines who was representing FLJS also said a few words.

Dr Kissane opened his presentation by discussing populism, claiming it has always been around but that it has recently become more prominent. Dr Kissane stated that populism impacts countries negatively for two reasons in particular. The first is that it allows extreme ideologies to strengthen. The second is that increasing power to the people can damage existing systems of checks and balances.

In the case of Turkey, Dr Kissane said, President Erdogan is relying on what he called ‘constitutional populism’. He said that President Erdogan was seeking to entrench his grip on power, going on to argue that the AKP has used concerns over political instability to gain support for the changes. Dr Kissane questioned whether the changes were necessary.

Dr Kissane claimed the reasons for the success of the AKP were its economic success and strong leadership. President Erdogan, he said, introduced change in the face of a reluctant bureaucratic elite. Dr Kissane claimed that a clash was inevitable due to the friction between Erdogan’s strong personality and the fact that the role of president in Turkey is ceremonial.

Discussing the proposed changes to the constitution, Dr Kissane noted that under the new system parliamentary and presidential elections would be held on the same day, potentially allowing the same party to dominate both branches of the government.

Dr Kissane ended his presentation by outlining the two possible scenarios for the future. Support for the changes, he said, would suggest there is support for strong authority while a rejection of these proposals would mean the electorate is fearful of populism and a concentration of power. Dr Kissane’s full paper exploring these ideas in greater depth can be found here.

Bill Kissane is a political scientist and historian, and Associate Professor in Politics at the London School of Economics, where he is a member of the Conflict Research Group. He is the author of several books including New Beginnings: Constitutionalism and Democracy in Modern Ireland (University College Dublin Press, 2011) and Nations Torn Asunder: the Challenge of Civil War (Oxford University Press, 2016). He has held visiting positions at University College Dublin, the University of Notre Dame, the University of Bielefeld, and the National Humanities Centre in North Carolina.

About the Foundation for Law, Justice and Society (FLJS)

The mission of the Foundation for Law, Justice and Society (FLJS) is to study, reflect on, and promote an understanding of the role that law plays in society. This is achieved by identifying and analysing issues of contemporary interest and importance. In doing so, it draws on the work of scholars and researchers, and aims to make its work easily accessible to practitioners and professionals, whether in government, business, or the law.

Briefing on Turkey, Russia and Syria