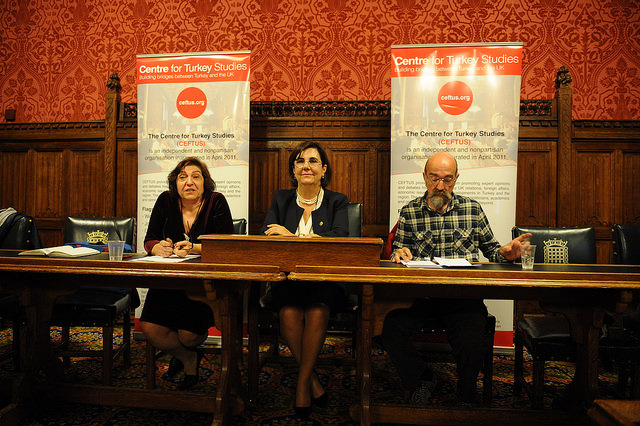 9th October 2017 – Professor Gaye Usluer, Member of the Turkish Parliament for the opposition Republican People’s Party (CHP), joined the Centre for Turkey Studies (CEFTUS) for a discussion in Westminster on the education system in Turkey. The event began with words of thanks and appreciation from Emily Casey-Haworth, host Faisal Rashid MP’s Assistant, and introductory remarks from chair Aysegul Yesildaglar, who thanked CEFTUS for its role in fostering dialogue and encouraging open debate. She also introduced the context of recent education reforms in Turkey and explained how the politics of education are a key dividing line between the various political parties and traditions of Turkey.

Gaye Usluer began her talk by outlining issues around pre-school education in the country. Usluer said that the ages of 3 to 5 years are of crucial importance to a child’s development, but that only 33% of children attend pre-school in Turkey and that there is great geographic inequality between figures for the West and the South and South-East of the country.

Usluer said that changes in the education system have been frequent and destabilising during the period of Justice and Development Party (AKP) government since 2002. She detailed how in some areas, the government has worryingly handed over responsibility for education to religious groups, and that the Diyanet (Directorate of Religious Affairs) has become a major player in the provision of education.

Usluer commented on how in the Ottoman period there were religious schools for children between the ages of 3 and 5 and that they are now making a comeback – there are now 600 of these types of schools in Turkey in connection with the local muftu, or religious scholar. In many of these schools, the teachers are the wives of the local imam, and classes are often held within mosque complexes. Usluer argued that this takes education out of democratic control and goes against the secular principles that an education system should be built on.

Usluer spoke about the pros and cons of the 2013 reforms to the education system, when the period of compulsory education was extended to 12 years to meet the standard of most developed countries. While Usluer said that CHP supports 12 years of compulsory education, she argued that the fragmented system of two 4-year levels of primary education plus one 4-year level of secondary education is problematic. She explained how there is a dramatic fall in numbers of female students after the first two levels, and in rural areas of the South and South-East numbers for both boys and girls drop off, with many boys going into child labour and girls getting married after the first 8 years.

Before progressing to the final 4 years of education, children in Turkey sit a nationwide exam. Usluer said that this exam has been changed three times under AKP and that this has led to confusion and uncertainty. Usluer said that while economic and foreign policy may change with changing circumstances, education should be entirely removed from politics and political meddling, and that the system should remain consistent with considered planning for teacher training, funding and so on.

Usluer spoke about the issue of student accommodation and issues of safety in student hostels ran by conservative and religious foundations. As a member of the Turkish parliament’s education committee, Usluer was able to provide great detail about some shocking cases of health and safety problems, child abuse and ideological imposition.

She closed by outlining CHP’s solutions to the problems in Turkey’s education system, advocating a year of state provided free pre-school education in addition to the 12 years of formal education provided by the state. She said that CHP is in favour of a state education system that is secular and based on reason and science, countering the current system which has seen government loyalists embedded within the education system.

In the Q&A, Usluer spoke about how Turkey needs genuine pluralism not majoritarianism in its education system. Usluer answered a question about local government by stating that CHP controlled municipalities have used the limited powers of local government to implement some of their education policies at the local level, but that this limited power has been stripped back by the government since the attempted coup of last July. Asked whether Gulenists still influence the education system in Turkey, Ulsuer said that it is difficult to know whether there is continued involvement and that there are unanswered questions.

Speaker biography
Professor Gaye Usluer is an academic who has been member of parliament for Eskisehir with the opposition Republican People’s party since 2015. Having graduated from the Faculty of Medicine at the Hacettepe University, she became a professor in 1998. She is currently the Head of the Division of Infectious Diseases at the Faculty of Medicine in Eskisehir Osmangazi University. Usluer was a visiting professor in Oxford John Raddclif Hospital in 1996, a Management Committee Member of the Society for Infectious Diseases and Clinical Microbiology Specialty in 2006 and she is currently an honorary board member at the Eskisehir Medical Association. She serves as a member of the Turkish parliament’s education committee.