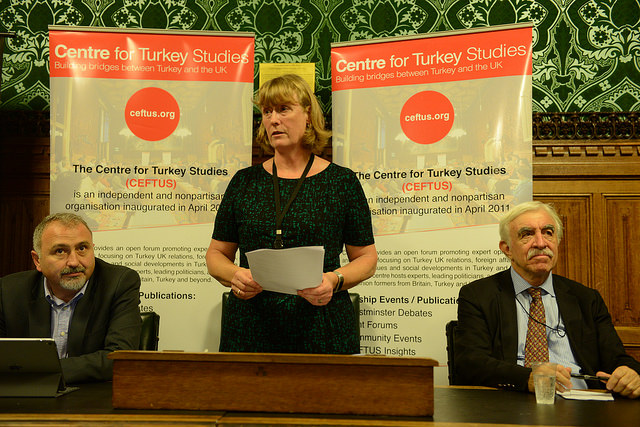 Cengiz Candar gave a wide ranging talk to guests in Committee Room 9 of the Houses of Parliament, covering Turkey, the Kurdish question and the Syrian conflict. He began by explaining the history of the region and emphasising the close links between Kurds living on both sides of Turkey’s Syrian border, which had been drawn after World War One. The forum was hosted by Joan Ryan MP (Enfield North) and was chaired by Murat Ozcelik.

Moving to more recent events, Mr. Candar explained how, after the ‘Arab Uprisings’ and the decline of the Syrian state, the Assad regime began to withdraw from Kurdish areas in the north of the country from 2012. This benefitted the political groups with close links to Turkey’s Kurdistan Worker’s Party (PKK), particularly the Democratic Union Party (PYD). The result was a drastic shift in Turkey’s foreign policy in Syria, which up until this point had been to support regime change as part of what Ankara thought was a reconfiguration of the political forces of the region in its favour. Turkey’s main priority became blocking the consolidation of an autonomous, PYD-controlled region along its southern border, taking the significant step of refusing to intervene when ISIS besieged the predominantly Kurdish city of Kobani.

However, Turkey’s situation became more complicated with the intervention of other international powers. Russia began providing air-support to the Assad regime, ultimately resulting in Turkey shooting down a Russian fighter that strayed across the border. At the same time, the US began to support the YPG, first in Kobani and then in a campaign to drive ISIS out of its Syrian capital in Raqqa.

Following the failed military coup in Turkey on July 15 2016, the Turkish Airforce removed most of its pilots, leaving it reliant on either the US or Russia to provide air cover for operations in Syria. Soon after, Erdogan apologised to Putin for downing the Russian plane, and the Russian air force supported ‘Operation Euphrates Shield’, a Turkish military intervention in Northern Syria aimed at blocking the YPG from linking the areas under its control. ‘Operation Euphrates Shield’ was Turkey’s first significant military action since Cyprus in 1974.

Mr. Candar ended by discussing the prospects for a renewed Turkish military operation in Syria’s Idlib, saying it remained as yet unclear whether the objective was to clear Al Qaeda linked militants from the region or the first step towards targeting the YPG in Afrin.  He argued that without coming to an accommodation with its own Kurdish population, Turkey was unlikely to be able to bring peace to the region.

Cengiz Candar studied political science and international relations at Ankara University. He began his career as journalist in 1976 in the Turkish daily newspaper Vatan after living for some years in the Middle East and Europe due to his opposition to the regime in Turkey following the military intervention in 1971. An expert of the Middle East (Lebanon and Palestine) and the Balkans (Bosnia and Herzegovina), Candar has worked for the Turkish News Agency and newspapers Cumhuriyet, Hürriyet, Referans and Güneş as a war correspondent. More recently, he has written for Radikal and Al Monitor.

Candar served as special adviser to Turkish president Turgut Özal between 1991 and 1993. Between 1997 and 1999, he lectured at Bilgi University in İstanbul. In 1999 and 2000, Candar did research work on Turkey’s role in the 21st century as a Public Policy Scholar at the Woodrow Wilson International Center for Scholars, and a Senior Fellow at the United States Institute of Peace.

Briefing on the Turkey – US visa dispute