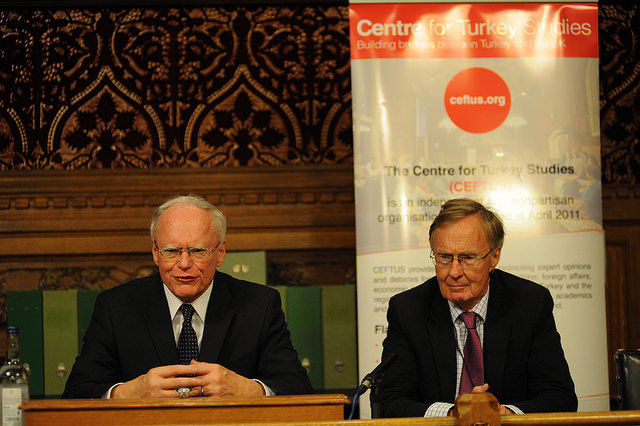 Mr. Jeffrey began by talking about the challenges Turkey faces in what he called the most challenging geopolitical neighbourhood outside of the Korean Peninsula. This includes Russia pressing forward in the north, two forms of Islamic extremism – both Sunni and Shia – increasingly dominating the south, plus the ongoing instability in the Arab world and Afghanistan and Pakistan to the east.

At the same time, Mr. Jeffrey argued that the west has significant strategic interests in Turkey. Turkey is deeply integrated into the European economy, in large part thanks to President Erdogan’s economic reforms, and is a crucial component of NATO and the US. At the same time, Turkey is a ‘status-quo power’, lacking Iran’s and Russia’s history and links to populations in other countries, making it difficult to be a regional leader. This gives Turkey an interest in its relations with the west, which aims to project power by bolstering regional status quos.

Turkey has always seen its relationship with the west in transactional terms rather than a particularly strong ideological affinity. However, both the influences of Eurasianism and Erdogan’s attempts to shape Turkey in his own image has moved the country away from traditionally western values, which has strained the relationship with Washington.

Initially, the US appreciated Turkey’s efforts under the AKP to the proactively maintain the regional status quo through attempts to find a solution to the Cyprus issue, initiating a peace process with the PKK, developing relations with the Kurdish Regional Government in Iraq, and mediating between Israel and Syria over the Golan Heights.

However, Turkey US relations have been undermined by the situation in Syria. Mr. Jeffrey argued that the US is now obsessed with defeating ISIS, which has necessitated an alliance with the People’s Protection Units (PYD), a group with close links to the PKK.

Relations have been further complicated by a series of legal disputes. Foremost of which is Turkey’s request for the US to extradite Fethullah Gulen, the leader of the religious organisation accused of leading the failed coup attempt. Mr. Jeffrey argued that the US government has always recognised the dangerous nature of the so-called Gulen Movement and initially resisted Mr. Gulen’s attempts to come to America. However, the US government’s powers are limited by the constitution, and for this reason cannot speed up or guarantee the outcome the extradition process. The same is true in relation to the case of Rezza Zarrab and other Turkish nationals accused of violating sanctions against Iran before being detained after travelling to America.

Mr. Jeffrey argued that the Washington has understood the recent detention of a Turkish member of staff from the US Consulate in Istanbul as an attempt to pressurise them over these disputes. There is also concern about the ability to run diplomatic offices without being able to rely on good relations with local staff. The resulting ban on Turkish citizens applying for US visas in Istanbul and Ankara, which has been matched by a similar move by Turkey, means that relations risk being further damaged at all levels. Mr. Jeffrey ended by expressing concern that these disputes keep happening.