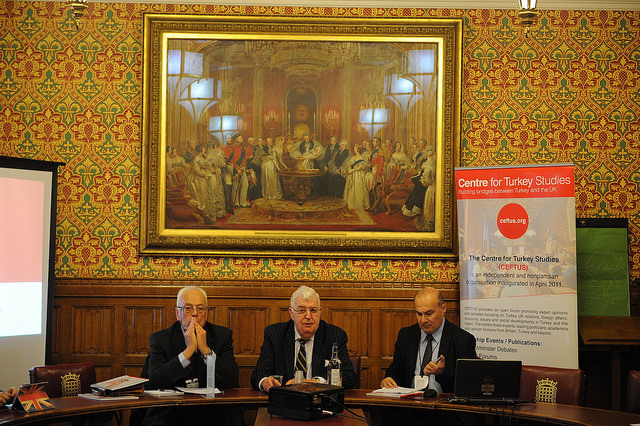 Two experts, one from each side of divided Cyprus, Dr Erol Kaymak and Dr Michalis Attalides, discussed the future of Cyprus at an exclusive roundtable on 8 February 2017, following on from the Cyprus reunification talks which were held in Geneva.

This event was kindly hosted and chaired by Lord Kilclooney.

Dr Erol Kaymak is Chairman of the Department of Political Science and International Relations at Eastern Mediterranean University. He is a founding member of the People’s Party (Halkin Partisi) in the Turkish Republic of Northern Cyprus (TRNC) headed by Professor Kudret Ozersay.  Dr. Kaymak is currently a member of the party assembly. Dr Kaymak has published on ethnic politics and on the case of Cyprus in academic journals and edited volumes. He has also produced or contributed to reports on Cyprus published by the United Nations in Cyprus (UNFICYP), the Centre for European Studies (CEPs) in Brussels, CIVICUS: Worldwide Alliance for Citizen Participation (CIVICUS), the Peace Research Institute of Oslo (PRIO), as well as the Center for Sustainable Peace and Democratic Development (SeeD).  Dr. Kaymak is active in academia, politics and public diplomacy.  He was a member of President Eroglu’s advisory board that worked closely with the Turkish Cypriot negotiating team between 2010 and 2015. During the ‘Annan Plan’ negotiations of 2004 Dr. Kaymak was a member of the technical committees that worked with the United Nations to finalize the blueprint prior to submission to simultaneous referenda in Cyprus.  In addition, Dr. Kaymak serves as coordinator for the Cyprus Chapter of the Greek Turkish Forum that aims to contribute to bilateral relations between Greece and Turkey.  He is also a founding member and a former director of a Cyprus-based think tank, the Center for Sustainable Peace and Democratic Development (SeeD).  Dr. Kaymak has featured in international and local media, including live interviews on BBC World, Al Jazeera English, and has been quoted in various news publications.

Dr Michalis Attalides was until 1 April, 2016, the Rector of the University of Nicosia and is the chair of  the  Jean Monnet Centre of Excellence  in European Politics and Policies at the University. He has been a lecturer in Sociology at the University of Leicester, a counterpart to the UNESCO Expert at the Cyprus Social Research Centre and a Guest Lecturer at the Free University of Berlin. He has represented the Republic of Cyprus as its Ambassador in a number of capitals, including Paris, London, and the European Union in Brussels, before being appointed Permanent Secretary of the Ministry of Foreign Affairs. He has also represented the Cyprus government in the European Convention.He held a Jean Monnet Chair ad personam at the University of Nicosia between 2011 and 2014. His books include Social Change and Urbanisation in Cyprus: A Study of Nicosia (1971) , Cyprus Reviewed (ed.)(1977), Cyprus: Nationalism and International Politics (1980) and (in Greek), Cyprus: State, Society and International Environment (2009). He has also published a number of articles on society and politics in Cyprus, Greece and Turkey, and on the European Union.