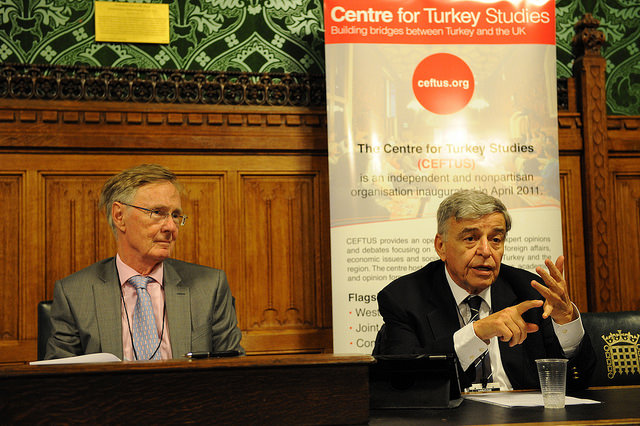 The Centre for Turkey Studies (CEFTUS)organised a public forum with Dr Can Paker, Chairman of the Board at Inovent, a Board Member at Akbank, and a founding member and Chairman of PODEM (Center for Public Policy and Democracy Studies).

This event was kindly hosted by Virenda Sharma MP for Ealing, Southall and chaired by Sir David Logan.

Sir David Logan opened the event discussing his and Dr Paker’s shared experiences in Turkey over the last 30 years.

Dr Paker began his speech by stating that his primary approach to Turkey’s political system is fundamentally a sociological one. He added that the political life of the country was rooted in its foundation, when a Westernised elite that controlled the state’s institutions attempted to conduct a social engineering project and shape an ideal Turkish citizen that behaved and thought like a European. He added that these citizens, known as ‘White Turks’ were prioritised over other groups including  Kurds, Alevis and religiously conservative Sunnis. He referred to this as a tutelage system of Government suited to a peasant-majority society.

He stated that the White Turk elites had used state institutions and especially the military to limit the power of the these marginalised groups through military coups of which there were three major ones in the late twentieth century.

Dr Paker also noted however that after the last of these major coups which occurred in 1980, that this changed under the leadership of Turgut Ozal who liberalised the Turkish economy which allowed religiously conservative peasants in Anatolia to start businesses, move to cities and become a new politically engaged Middle Class which helped to break the hold of the tutelage of the state institutions and promote popular rather than institutional sovereignty as had been dominant before.

Dr Paker’s opening remarks were followed by a question and answer session.

When asked about the 15th of July 2016 coup attempt, Dr Paker argued that this attempt also fitted the sociological model and indicated the change that he described. He continued, arguing that the Gulen movement had also attempted to use institutions such as the military to enforce their will on the country, but added that the sociological model also explained the response from Turkish citizens in stopping the coup. He argued that the fact that Turkish citizens came to the streets like never before to prevent the military coup showed that they had developed greater political awareness from these social changes and asserted that sovereignty belonged to them rather than to institutions. He also argued however that even though the people asserted their sovereignty which showed democratic development in Turkey, he added that these people’s attitudes were not entirely in step with liberal democratic values. He evidenced this by pointing to the fact that a significant number of Turkish citizens are advocating the re-introduction of their interests.

In response to a question about the Kurdish Issue, Dr Paker also argued that the historically dominating state institutions had created the problem through their social engineering project and cracking down on the expression of Kurdish identity. He also noted however that the Turkish Government under the Justice and Development Party (AKP) had managed to successfully conduct a peace process with Kurdish militants the Kurdistan Workers’ Party (PKK) and that positive advances had been made in granting greater political rights to Kurds. He also argued that the Syrian conflict however had presented an opportunity for Kurdish statehood and autonomy which had led the PKK to pursue these aims instead rather than pursuing equal rights and expression in Turkey. He concluded by stating that the Kurdish issue in Turkey would not be solved until the Syrian civil war is also resolved.

When asked about the proposed changes to the constitution which will be put to a popular referendum in April, Dr Paker argued that these changes would bring about a better constitutional arrangement than the present constitution he also argued however that if the public voted for the changes to be made, a major deficiency would be that it would not introduce a first past the post electoral system.

Dr Paker also responded to a question about Turkey’s relations with European partners including the Netherlands and Germany by stating that their current spat with Turkey witnessed an over-reaction from both Europe and Turkey and added that politicians from both sides used these to further their aims electorally.

When asked about the previous links of the AKP to the Gulen movement, he explained that the AKP had previously encouraged the Gulenists into the state institutions when it was its elected to govern as the Gulenists were an Islamic movement that they believed they could trust who also had important expertise, experience and knowledge that the AKP as a new government did not have at the time.

Currently he is the Chairman of the Board at Inovent A.Ş., a Board Member at Akbank, and a founding member and Chairman of PODEM (Center for Public Policy and Democracy Studies), an İstanbul based think tank established in 2015.

Briefing on dissent within the MHP