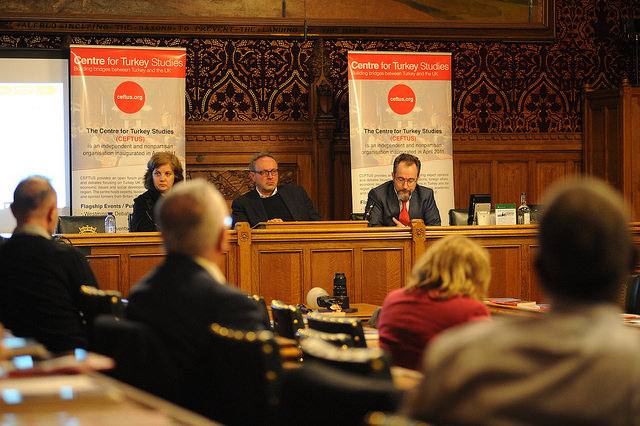 The Centre for Turkey Studies (CEFTUS) organised a public forum with Dr Ibrahim Sirkeci, Professor of Transnational Studies and Marketing and the Director of the Regent’s Centre for Transnational Studies (RCTS) at Regent’s University London, and Dr Saniye Dedeoglu, Associate Professor of Social Policy at the Department of Labour Economics and Industrial Relations, Mugla Sitki Kocman University, Turkey.

This event is kindly hosted by Kate Osamor, Labour MP for Edmonton and chaired by Dr Tunc Aybak of Middlesex University.

Dr Tunc Aybak opened his speech by extending his sympathies to those who suffered in the recent terrorist attacks in London. He then continued by providing context for the debate on integration and Brexit Britain and commented on large-scale migration movements and the challenges that these can present with regard to integration and other similar issues.

Dr Ibrahim Sirkeci opened his speech by mentioning that the term Turks and Turkish are often used interchangeably and that the preferred terms for migrants to Britain from Turkey and Cyprus is Turkish, Kurdish and Turkish Cypriot commonly referred to as TKTC. He continued, discussing the term “integration” referring the recent Dame Casey report and argued that integration is  a two-way street in disagreement with the the report’s arguments. He added that integration can be measured in from several sources including social and cultural engagement, discrimination and labour markets. When referring to discrimination, Dr Sirkeci also added however, that there are more mosques and cemevis per head of the TKTC community in Britain than in Turkey.

He added that Poland, India, Pakistan, Ireland and Germany are the top destinations from which migrants to Britain predominantly come, but added that Turkey is in the top 25 of these. Dr Sirkeci also noted that TKTC’s are 1.2% of the total foreign born UK population and contested the claim that the number of TKTC’s in Britain is at 500,000, 400,000 or 300,000, noting that the number is most likely at 250,000, and that the highest proportions of these are to be found in areas of North London such as Hackney and Haringey. He also noted that according to respondent self-identification-based censuses, the number of TKTC’s in London in 2011 was recorded as 108,898. He added that according  to his surveys, the majority of TKTC respondents, particularly among women identified as Kurdish but that Turkish was the more commonly spoken language. He added that this could be partly explained by the conflict model of migration and also in part by Turkish-Kurdish mixed marriages.

Dr Sirkeci also explained that according to Labour Markets self-employment was carried out by almost  a 5th of all male respondents, but that employment inactivity was also high among female respondents. In terms of citizenship, he also note that nearly 80% of Turkish citizen migrants had become British citizens, which would indicate that they are quite well integrated from this perspective. He also added that socio-cultural integration was also growing among TKTCs as high English-language proficiency migrants tended to watch British TV channels in higher numbers and more regularly.

On the issue of lessons for Brexit Britain, Dr Sirkeci added that a great deal of integration has been taking place among migrant communities in the UK and also noted that issues such as democratic, demographic and development deficits are what  are chiefly contributing to large migrant movements from Turkey to Britain.

When asked about the exaggerated numbers of TKTC migrants, and whether or not migrants on certain visas are counted or not in surveys and censuses, Dr Sirkeci re-affirmed his estimated figures and the methods used and added that if the exaggerated numbers for various migrant communities in Britain were  accurate, the UK population would be at over 100 million. In response to a question about integration being a two-way street, he also noted that the food industry was a good example of this, and gave the example that Doner Kebabs have become a readily available part of Britain’s food culture which is sold to British people by TKTC migrants who have become economically integrated into the host community as a result.

Dr Saniye Dedeoglu opened her speech by discussing research she conducted among TKTC women in London in 2010-2012. Her main focuses were the contribution of women to the Turkish ethnic economy in Britain and also on the interaction between the gender, labour and social integration of women and how this role impacts women’s advancement within their own communities.

She stated that her main finding was that TKTC women in Britain had greatly contributed to their ethnic economy but also made their work invisible. She continued discussing that the Turkish ethnic economy has been the main employer of TKTCs since the closure of garment factories. She added that the ethnic economy is chiefly made up of kebab-related businesses, off-licence and coffee shops and restaurants. She also added that these businesses tended to be family-owned and run due to the labour-intensive and long hours demanded by these roles. She also noted that younger generation members of these families with greater language and educational ability participate in these businesses.

She added that women’s roles in the Turkish ethnic economy have declined since the decline of the garment and textile industry, in which they had previously participated heavily often working long hours for cash in hand incomes. She noted however that with the decline of this industry, female workers’ wages declined and that they now tended to be unpaid or under-rewarded wage-workers in family businesses often in kitchens in food-related businesses, cleaning shops and preparing goods to be sold. She also noted a trend in that when performing roles similar to those that they would undertake domestically in these businesses, this work would usually be undervalued, and that women tended to focus on child-rearing instead as a full-time occupation.

Dr Dedeoglu noted however that these women would often try to act as a bridge between their children and the host communities, taking them to community centres and to extra school classes in order to integrate them, with the aim that their children would gain access to higher education. She concluded that in this way, despite their being invisible in their ethnic economy, they contribute to the integration of their children but are only partly-integrated themselves. She added that these women are often stigmatised for their welfare dependency, but are actually contributing positively to the integration of the younger generation of their community  into wider society in their role as mothers.

When asked about the definitions of immigrant communities, Dr Dedeoglu noted that among TKTC’s there were a number of different groups such as specifically Kurdish migrants who came for political groups among others.

Saniye Dedeoglu is Associate Professor of Social Policy in Department of Labour Economics and Industrial Relations, Mugla Sitki Kocman University, Turkey. She received her PhD in 2005 from the School of Oriental and African Studies (University of London). Dr Dedeoglu is author of several books including Migrants, Work and Social Integration – Women’s Labour (2014, Palgrave).Further info: https://mugla.academia.edu/SaniyeDedeoglu