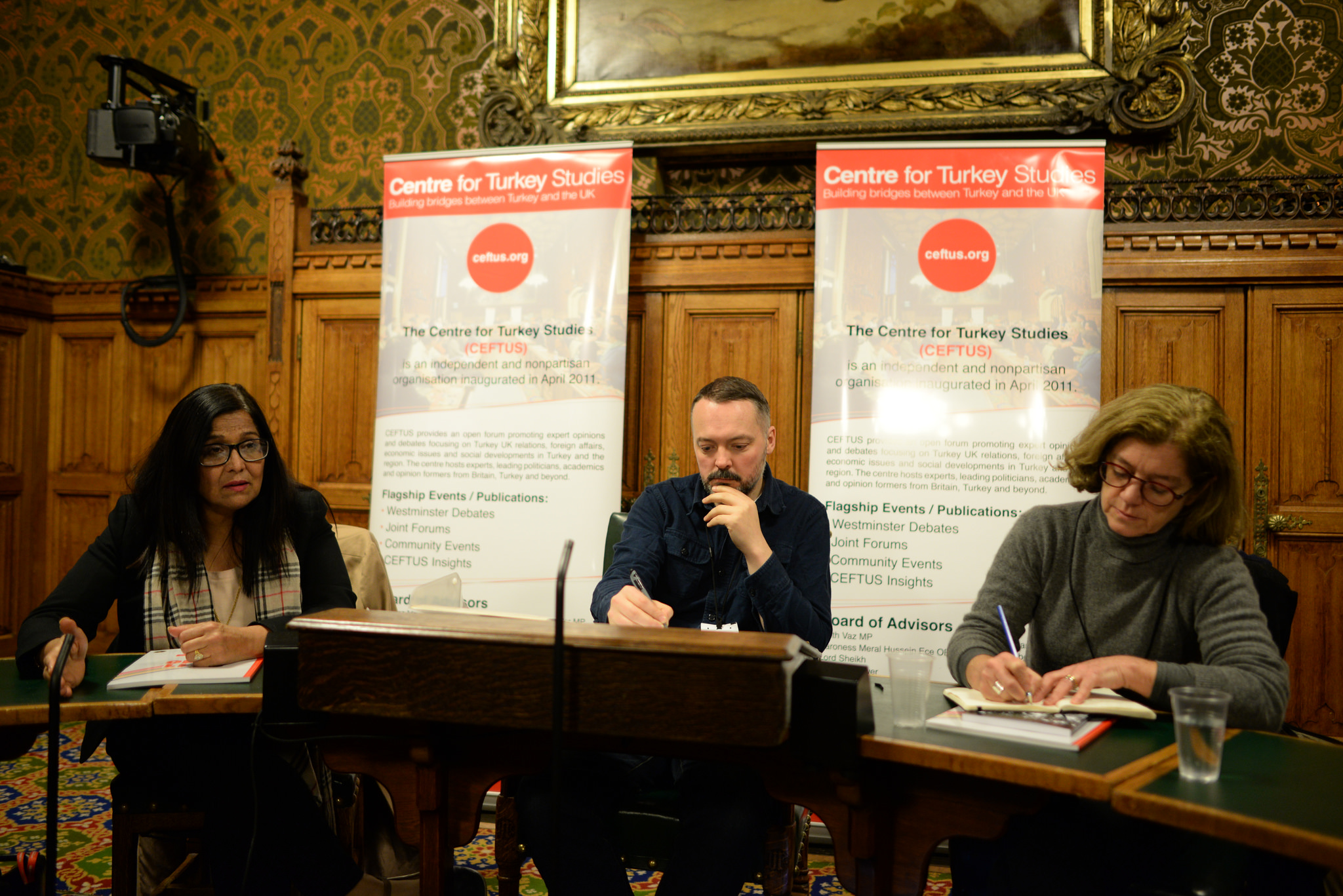 Turkey has been deeply involved in the international aid effort for the Rohingya, and on 7 September, Turkey’s foreign aid agency became the first foreign outfit to deliver an initial shipment of 1000 tonnes of basic food and medicine to Rohingya areas. Meanwhile, Turkish officials have visited the refugee camps in Bangladesh and offered assistance to displaced people.

Because of Turkey’s international involvement and the interest of the Turkish people in this issue, the Centre for Turkey Studies (CEFTUS) organised an event to discuss the ongoing persecution of – and humanitarian crisis facing – the Rohingya people in Myanmar. International lawyer Thomas McManus chaired, and the event was kindly hosted by Shadow Minister for Justice, Yasmin Qureshi MP, who also spoke about her recent visit to the refugee camps. Joining them on the panel were Sufyan Ismail, founder of Muslim Engagement and Development (MEND), and Professor Penny Green of Queen Mary University.

Chair Thomas McManus began by introducing the panel of speakers and the topic. He thanked CEFTUS for organising the meeting. Professor Penny Green spoke first, taking us back to the situation in 2012 when she first visited in the aftermath of massacres of Rohingya. She obtained a grant in the UK to return and study the situation in greater depth, and went back to Myanmar in 2014. She observed a situation where the Rohingya were ghettoised in the capital, and villages in Rakhine state were “prisons”. Professor Green commented on how the Rakhine ethnic group has gone from two-thirds of the population in the state to above 90% due to the killings and displacement of Rohingya people. She spoke about the various stages of genocide – dehumanisation, legal barriers and denial of rights leading to violence, isolation and state-encouraged “systematic weakening” of an entire people. Professor Green conducted various interviews while she was there – with both Rohingya villagers and Buddhist nationalists. She concluded that the Rohingya were going through a “social death”, and that the responsibility lay squarely with the Myanmar state (in particular, the military). She criticised the moderate language of ‘ethnic cleansing’ bandied around by the international community, and said that the only appropriate word was genocide.

Yasmin Qureshi MP spoke after Professor Green. She told of how she was contacted by a constituent five years ago, first exposing her to the issue of Rohingya persecution in Myanmar. She argued at the time that the international sanctions against Myanmar were lifted too early, and that the international community had “turned a blind eye” to the situation. Qureshi spoke about the exploitation of girls in camps, and the triumphalism of Burmese society. Political leader Aung San Suu Kyi came in for criticism, with Qureshi saying she displayed a complete lack of leadership on the issue in not recognising the situation faced by the Rohingya. She spoke about her recent visit to the camps in Bangladesh and said that the international community needs to step in to prevent further suffering.

Sufyan Ismail of MEND spoke of how absurd the situation is that a UN member state since 1948 is able to act in the way it has. He criticised the Pope for not referring specifically to the Rohingya on his recent trip to Myanmar, and Theresa May for her silence on the issue. Mr Ismail gave a potted history of the Rohingya in modern day Myanmar. He said that 288 villages have been destroyed; that on some days, 10,000 refugees have been arriving in Bangladesh; and that babies have been thrown into burning buildings. He spoke of the need to lobby the UK government to provide humanitarian relief, and said that the Nobel committee should strip Aung San Suu Kyi of her illustrious prize.

In the Q & A, Green spoke about how the Myanmar state tries to get Rohingya to self-identify as ‘Bengali’; how there is no effective civil society in Myanmar to resist the oppression; and that Myanmar is an extremely racist country. She said that Aung San Suu Kyi’s deal with the military upon her coming to power was a “deal with the devil”, with the three main ministries remaining under the military’s control. Sufyan Ismail spoke about China’s involvement and increasing investment in Myanmar, and that we can trace the current situation back to the late 1970s, when the military junta ramped-up repression of minorities – especially Rohingya. There was an enlightening discussion about the limitations of the International Crimes Tribunal (ICT).

Sufyan Ismail is an award-winning UK Entrepreneur and Philanthropist. In 2001, he set up 1st Ethical, the UK’s first FSA authorised financial services firm which he later converted into a charity. In 2007, he founded OneE Group, a specialist wealth management and consultancy operation. Sufyan retired formally from full-time business activity in 2014 to tackle Islamophobia and in 2014, Sufyan founded MEND (Muslim Engagement and Development), a specialist initiative geared towards tackling Islamophobia by advocacy work with the media and Westminster.

Briefing on Jerusalem and the Turkey – Israel relationship