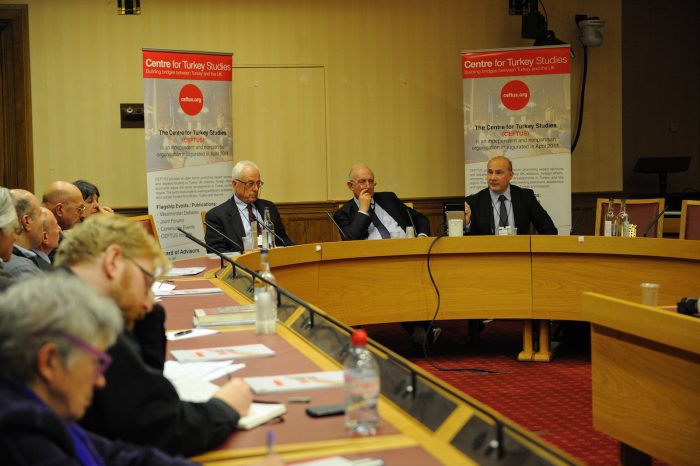 This CEFTUS Westminster Debate was kindly chaired and hosted by Lord Hannay.

Keynote speakers were Dr Erol Kaymak, the Chair of the Department of Political Science and International Relations at Eastern Mediterranean University and Dr Michalis Attalides, who was Rector of the University of Nicosia until 1 April 2016 and is currently the chair of the Jean Monnet Centre of Excellence in European Politics and Policies at that University.

Lord Hannay opened the event discussing his interest in and experiences of the Cyprus problem. He stated that the discussion was timely and topical at present given the recent January talks on the matter, which though unsuccessful as of yet, have kept the conversation open. He argued that there was a better chance of success in solving the problem than with the rejection of the Annan Plan in 2004, as leaders from both sides are presently willing to find a solution on a give and take basis. He stated that this had not been the case previously. He also commented that the economic gap between either side of the island had narrowed due to the euro crisis and added that with the discovery of gas deposits near the island, both sides would stand a better chance of capitalising on these commercially with a united Cyprus. This led Lord Hannay to conclude that the outlook was hopeful, but added that no settlement would work without guaranteeing that both sides would feel secure.

Dr Michalis Attalides began by emphasising the long-term failure to find a solution to the Cyprus problem and why this was the case. He argued that though the problem had not started in 1974, the invasion had greatly complicated the problem by increasing mutual fear and suspicion between Greek and Turkish Cypriots.

He noted however that the leadership of both sides were making strong efforts to solve the problem as both had long expressed openness to co-operation while also trying to overcome the pre-existing suspicion and mistrust between either sides. He added that geopolitical changes including the natural gas deposits off the coast of the island having added new motivations on either side to work together, as had the instability in the region surrounding the area having renewed interest in Cyprus.

He argued that there were 4 main hurdles yet to be overcome. He stated firstly that the leadership of either side needed to close all 6 chapters required for a settlement. He noted however that issues such as effective participation in federal executive decision-making and the issue of a rotating presidency had caused problems in this process. He added that another issue was that of property and the rights surrounding them, explaining that the proportionate weight of these rights had caused a problem for both sides, including the rights of refugees to return to their properties. He added that the second hurdle was the presence of Turkish troops on the island, suggesting that alternative arrangements should remove the overwhelmingly large Turkish military presence in the North while also ensuring the security of the Turkish Cypriots. He added that at present, suggestions to promote inter-communal security included both separate and federal police forces, stating that the security of one side should not undermine that of the other side. He also mentioned the third hurdle, which was the undertaking of referendums on solution plans among both sides, and added that one piece of research indicates that a third of both communities presently plan to vote against any plan. More optimistically however he added that two-thirds of either side were open to a solution. He stated that the fourth hurdle was whether the actual implementation of an approved solution would be successful, questioning whether a rotating presidency would be accepted by the Greek side and whether Turkish troops would actually withdraw.

He concluded stating that from a sense of mutual security and a sense of equal citizenship in a law-abiding state would be part of a glue that would hold together a unified and democratic Cyprus. Finally, he noted that the issue was at the closest ever to being solved.

Dr Kaymak opened discussing the durability of the issue, mentioning un-met virtual deadlines including last year. He argued that negotiations were primarily seeking a bi-zonal, bi-communal state and that the process had competing values including democracy, human rights and the acquis communitaire. He agreed with Dr Attilades that the leaders of either side were aiming for a yes:yes outcome in both potential referendums, previous attempts at which such as in 2004 had failed. He added that the UN has presently not been playing a top-down role as before, but rather a facilitating one, making the process Cypriot-led and Cypriot-owned. He added however, that the Geneva talks on the issue had failed in being unable to establish a plan, but that the conference was planning to re-convene in March. Dr Kaymak, stated however that the compromises are unlikely to be made in the next three weeks before the re-convention.

He was also critical of the presently proposed directly elected presidency with a great deal of centralised authority, he argued that this missed the point, and that the priority ought not to be “getting things done” in the business of government, but rather “getting along” which would be better preserved by stronger checks and balances on the executive.

Dr Kaymak also discussed the role of the European Union in the process which complicates the issue as bi-zonality is not part of the acquis communitaire which would mean that this principle could be overturned in a court. He added that Turkish Cypriots were concerned about this. On the issue of property rights, he added that Turkish Cypriots tended to favour a more practical and definite ruling on this issue, which is not yet forthcoming.

Concluding, he prescribed that a viable model including a re-thinking of the issue of executive power as a part thereof was critical, and that if this was not addressed now, there would be potential for the re-internationalisation of the issue, which could also lead to the ultimate shelving of the issue without resolution.

Dr Erol Kaymak is Chairman of the Department of Political Science and International Relations at Eastern Mediterranean University. He is a founding member of the People’s Party (Halkin Partisi) in the Turkish Republic of Northern Cyprus (TRNC) headed by Professor Kudret Ozersay.  Dr. Kaymak is currently a member of the party assembly. Dr Kaymak has published on ethnic politics and on the case of Cyprus in academic journals and edited volumes. He has also produced or contributed to reports on Cyprus published by the United Nations in Cyprus (UNFICYP), the Centre for European Studies (CEPs) in Brussels, CIVICUS: Worldwide Alliance for Citizen Participation (CIVICUS), the Peace Research Institute of Oslo (PRIO), as well as the Center for Sustainable Peace and Democratic Development (SeeD).  Alongside academics, Dr. Kaymak also straddles politics and public diplomacy.  He was a member of President Eroglu’s advisory board that worked closely with the Turkish Cypriot negotiating team between 2010 and 2015. During the ‘Annan Plan’ negotiations of 2004 Dr. Kaymak was a member of the technical committees that worked with the United Nations to finalize the blueprint prior to submission to simultaneous referenda in Cyprus.  Meanwhile, Erol Kaymak serves as coordinator for the Cyprus Chapter of the Greek Turkish Forum that aims to contribute to bilateral relations between Greece and Turkey.  He is also founding member and a former director of a Cyprus-based think tank, the Center for Sustainable Peace and Democratic Development (SeeD).  Erol Kaymak has featured in international and local media, including live interviews on BBC World, Al Jazeera English, and has been quoted in various news publications.

Dr Michalis Attalides was until 1 April, 2016, the Rector of the University of Nicosia and is the chair of  the  Jean Monnet Centre of Excellence  in European Politics and Policies at the University. He has been a lecturer in Sociology at the University of Leicester, a counterpart to the UNESCO Expert at the Cyprus Social Research Centre and a Guest Lecturer at the Free University of Berlin. He has represented the Republic of Cyprus as its Ambassador in a number of capitals, including Paris, London, and the European Union in Brussels, before being appointed Permanent Secretary of the Ministry of Foreign Affairs. He has also represented the Cyprus government in the European Convention.He held a Jean Monnet Chair ad personam at the University of Nicosia between 2011 and 2014. His books include Social Change and Urbanisation in Cyprus: A Study of Nicosia(1971) , Cyprus Reviewed (ed.)(1977), Cyprus: Nationalism and International Politics (1980) and (in Greek), Cyprus: State, Society and International Environment (2009). He has also published a number of articles on society and politics in Cyprus, Greece and Turkey, and on the European Union.