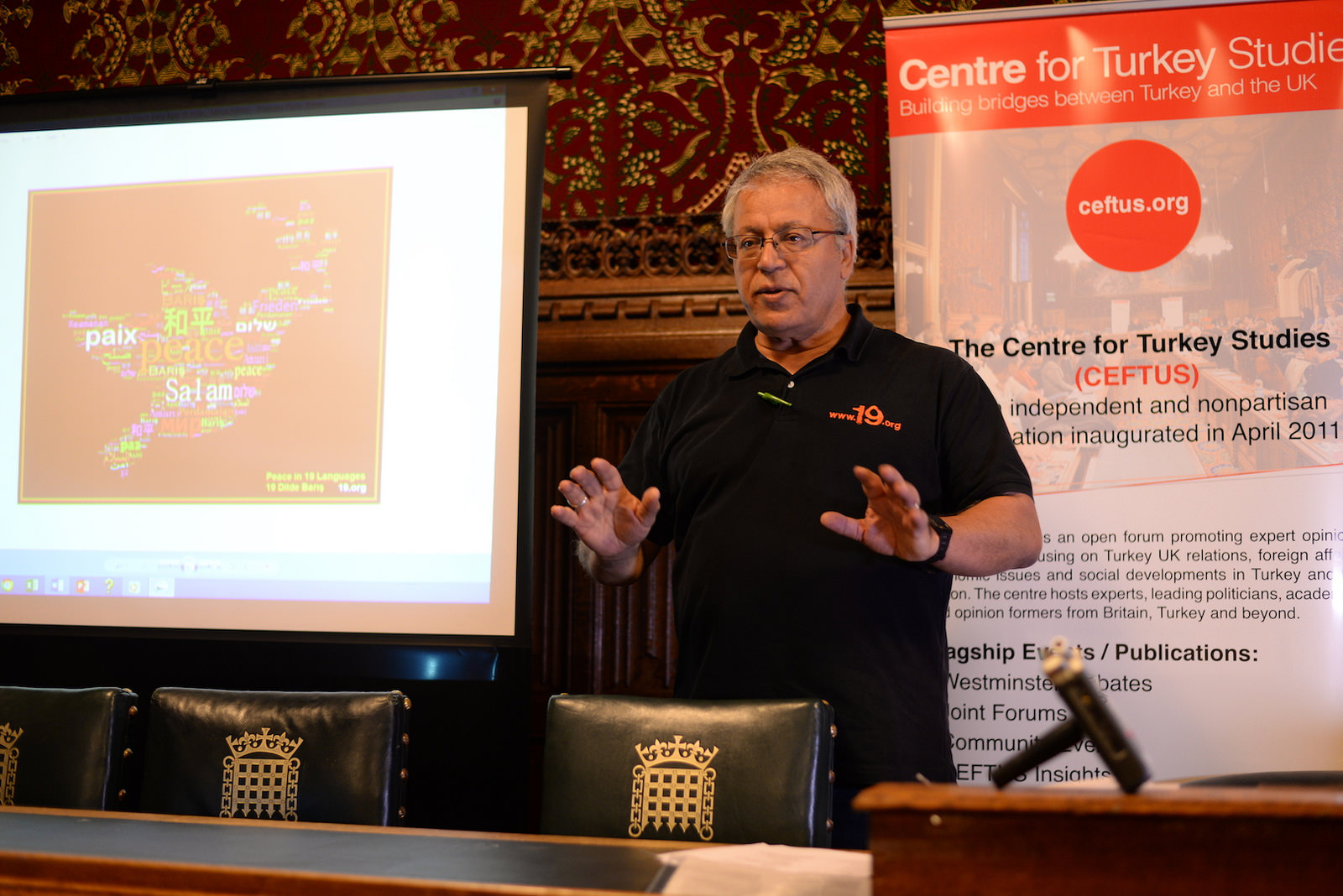 The Centre for Turkey Studies (CEFTUS) held a public forum entitled ‘The nine factors behind the rise of ISIS: from the USA to Saudi Arabia’ with keynote speaker Edip Yuksel, American-Turkish-Kurdish intellectual and professor of philosophy. The event was kindly hosted by Sharon Hodgson, Labour MP for Washington and Sunderland West.

Mr. Yuksel began by speaking about his own life and his fascinating personal history. In the 1970s, he belonged to the same pro-Islamic political movement as current Turkish President Recep Tayyip Erdogan. His brother and political kindred spirit was murdered by ultra-nationalists during this period and when Edip was later thrown in prison for his politics, he had to share it with his brother’s killer. More than a decade on, his intellectual mentor Rashad Khalifa was also assassinated in what was the first Al-Qaeda attack in the United States.

Yuksel described how, in the late 1970s and early 1980s, he was adored by the political movement he belonged to and became a best-selling author in Turkey. He later, however, turned his back on his former religious politics, in the process being disowned by his father and friends. He also spoke about his personal hero, the Iranian philosopher and revolutionary Ali Shariati, who synthesised Islam and socialism.

Mr. Yuksel talked about his “philosophy of peace”, saying that “war is where the devil dances” and outlining how conflict leads to more conflict, describing arms companies such as Ratheon, BAE and Boeing as the “enemies of humanity”. He said that ISIS emerged from the invasion of Iraq, just as the Taliban has emerged from the Soviet invasion of Afghanistan. Yuksel also criticised the “cultural violence” of video games and movies in feeding into an environment where violence is normalised.

On a more positive note, he described his excitement about Bernie Sanders’ radical campaign in the US last year, and about the potential that new communications and social media has in leading people away from traditional propaganda.

Mr. Yuksel commented on the situation in his country of birth, saying that while he supported some of the current ruling party’s early liberalising reforms, Turkey has now descended into “totalitarianism”, censoring criticism of the government and oppressing Kurds and minorities. He praised the US constitution for separating powers at a time when Turkey is seeing power centralised, and “megalomaniac” leaders like Trump and Putin are in place in the US and Russia respectively.

His speech was followed by a lively Q & A.

The views of our speakers do not represent the views of the Centre for Turkey Studies.

Edip Yuksel is the author of over twenty books and hundreds of articles on religion, politics, philosophy and law in Turkish and English. Edip organizes international Critical Thinkers for Islamic Reform conferences; so far in Atlanta, Oxford, Los Angeles, Almaty, and Istanbul and is the co-editor of the annual anthology carrying the same name. He has given lectures at various universities, including University of Arizona, Emory Law, Oxford University, Middle East Technical University, TU Dortmund University International and Princeton University.

After receiving his bachelor degree from the University of Arizona in Philosophy and Near Eastern Studies, Edip received his law degree from the same university. Besides activism, writing and lecturing, Edip works as an Adjunct Philosophy professor at Pima Community College. Edip is fluent in Turkish, English and Classic Arabic; proficient in Persian, and barely conversant in Kurdish, his mother tongue. To promote rational monotheism and peace Edip founded Islamic Reform, 114 Organizations, and co-founded MPJP. Edip shares his documentaries and home-made videos at his youtube channel. His online books and articles are published at numerous Internet sites, including www.19.org.

While a popular Islamist youth leader, Edip adopted the Quran Alone philosophy after corresponding with Rashad Khalifa and reading his landmark book, Quran, Hadith and Islam. This led him to experience a paradigm change in 1986. He parted ways from his comrades, including Tayyip Erdoğan and Ahmed Davudoğlu, who have been leading Turkish politics for over a decade. As a consequence, he was declared to be a heretic. In 1989, he was sponsored for immigration to the USA by Rashad Khalifa and worked together in Masjid Tucson until his mentor’s assassination in 1990.

Briefing on the challenges facing the Turkish economy