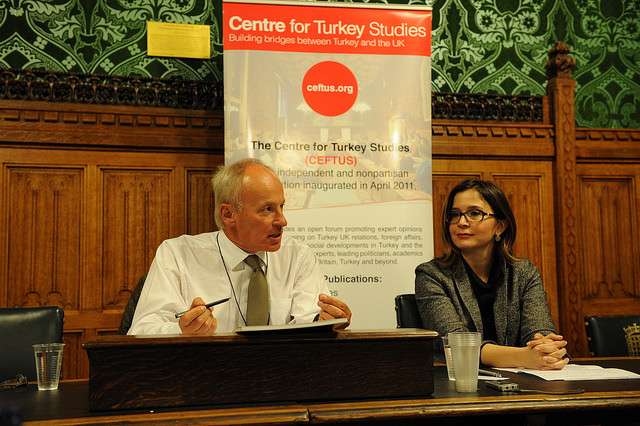 The event was chaired by Bill Park of King’s College. The Keynote speaker was Dr. Senem Aydin-Duzgit, Senior Scholar and the Research and Academic Affairs Coordinator at Istanbul Policy Centre and an Associate Professor of International Relations at the Faculty of Arts and Social Sciences of Sabanci University.

James Gray MP opened the event by discussing his interest in Turkish nationalists and expressed his view that geopolitically speaking, Turkey is currently one of the most important countries due to its central position between the East and the West.

Bill Park began the debate by recognising the inherently interesting nature of this particular debate. Park said that not only is the relationship between Turkey and the EU dynamic,  each party in Turkey is dynamic within itself. Change in Turkey is currently ongoing and faces several elements of surprise and shock. In addition, there exists a continuing economic crisis in Southern Europe and less confidence in the EU than before. Therefore, this debate not only covers the dynamics between Turkey and the EU, it covers what happens separately within the two.

Dr. Senem Aydin-Duzgit opened by discussing a book titled ‘Turkey and the European Union’ that she wrote alongside Nathalie Tocci which was published in June 2015. Since being published, Dr. Duzgit notes the high amount of change within the Turkey and EU relation and how this change can happen rapidly.

Within this book, both Nathalie Tocci and Dr Duzgit used three different methods of analytical perspectives. Through these lenses, they looked at various policy issues such as democracy, human rights, economy, migration, security and culture and identity. Dr Duzgit uses these three perspectives to analyse the current relationship of Turkey and the EU.

Dr. Duzgit’s first analytical approach was to conceptualise Turkey as an enlargement country. That is, a country that is formally conducting concession negotiations with the European Union. Dr. Duzgit stated that currently, the enlargement process to Turkey is off the agenda for the foreseeable future due to the crisis that the European Union is dealing with economically and politically. Officially speaking, Turkey is still a candidate country for the EU. Turkey is still conducting accession negotiations with the EU. However, only one chapter of the accession process has been opened and closed. Turkey can not close any chapters with the EU because of a European council decision taken in December 2006. Unless Turkey extends the Customs Union Agreement which it has with the EU to Cyprus, which would mean allowing Cyprus to access to its airports and shipping ports, no accession negotiation chapters can be closed.

Dr. Duzgit noted that in the EU, talk on Turkey has shifted from Turkey as a candidate country to Turkey as a strategic partner of the EU. The reasons for this are as following; there is a reluctance from the EU to even discuss enlargement. In Turkey, the EU is completely off the agenda. Although an EU Ministry still exists, there is little political commitment to the accession process. In Turkey,  there is a loss of interest in the EU.  According to Dr Duzgit, after the AKP’s third term in government, the EU was no longer instrumental, it became more of a liability than an asset for the government.

Dr. Duzgit noted that Germany in particular are vulnerable to the policies of the Turkish government. Germany have been criticised for their lack of protest with regards to domestic violations of democracy in Turkey. The deal is based on the assumption that Turkey is a safe country for refugees, it has been argued that this is not the case.

Finally, Dr. Duzgit analysed Turkey as a global actor. That is, trying to analyse what the EU- Turkey relationship looks like if we conceptualise it as a global actor, something that was largely discussed in 2015. In  the early 2000’s, there was great discussion about Turkey as a democratic model. The Arab Spring in Egypt was a major blow for the Turkish Policy makers and government. They realised the difficulty of infiltrating their ideology. Turkey’s involvement in the Syrian crisis dramatically hampered Turkey’s reputation and its possibility of becoming an ally to the EU.

Dr. Duzgit concluded the discussion by emphasising the uncertainty of the future. She expressed that despite that fact that the Turkish state of democracy and civil state is criticised by the EU, the EU is not opening chapters on democracy and human rights with Turkey. Symbolically, this belittles the effort of groups in Turkey that fight for a better country.

Senem Aydın-Duzgit is a Senior Scholar and the Research and Academic Affairs Coordinator at Istanbul Policy Center and an Associate Professor of International Relations at the Faculty of Arts and Social Sciences of Sabancı University.

She was previously a Jean Monnet Chair of EU Political and Administrative Studies in the Department of International Relations at Istanbul Bilgi University. Her main research interests include EU enlargement, Turkish foreign policy, discourse studies, politics of identity, and democratization. She holds a PhD from Vrije Universiteit Brussels, an MSc from the London School of Economics and Political Science, and a BA from Boğaziçi University.

Her articles have been published in West European Politics, Cooperation and Conflict, South European Society and Politics, Alternatives, International Relations, and Politique Europeenne. She is the author (with Nathalie Tocci) of ‘Turkey and the European Union’ (Palgrave, 2015) and ‘Constructions of European Identity: Debates and Discourses on Turkey and the EU’ (Palgrave, 2012). She is a member of the ECFR Council, a board member of the Centre for Economics and Foreign Policy Studies (EDAM), and a member of the Global Relations Forum (GIF). She also serves as the Associate Editor of South European Society and Politics. She was awarded the Young Scientist Award of Turkey’s Science Academy (BAGEP) in 2014.

Briefing on women in Turkey