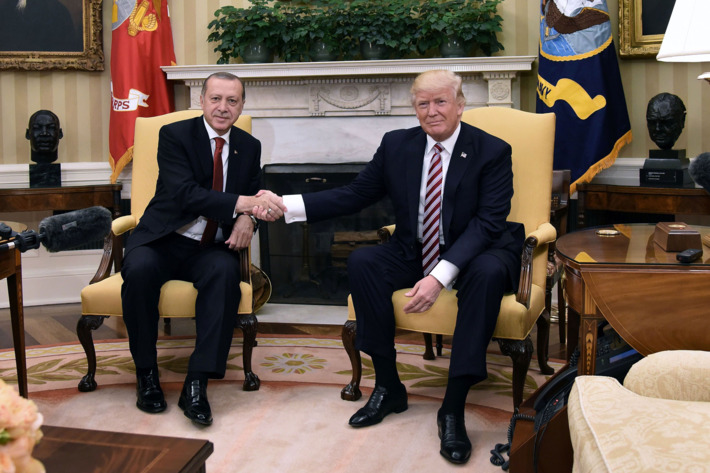 Presidents Erdogan and Trump’s much-hyped meeting took place this week in Washington and while Turkey may not have secured the changes in US policy on Syria it had sought, the two men appeared to establish a good rapport and be willing to smooth over their countries’ differences.

• Following this visit, there should be little more doubt that Turkey has not been successful in endeavouring to become the US’ partner of choice in Syria and so halt Kurdish expansion.

• Nonetheless, President Erdogan spoke kindly of President Trump and the personal chemistry between the two leaders may prove to be valuable for Turkey in the long term.

• Both sides put on a friendly face for the meeting, suggesting the US-Turkey bond is rewarming despite recent events, with Turkey’s pro-government press reacting positively.

In Turkey, a lot of speculation surrounded the build up to President Erdogan’s meeting with his American counterpart. More than any other issue, the most pressing geopolitical concern in Turkey at the moment is over the Kurdish Democratic Union Party’s (PYD) ever increasing strength in northern Syria, supported by the US. The PYD has proclaimed a federal state in northern Syria, referred to as Rojava, and with US support its armed wing, the People’s Protection Units (YPG), continues to capture more and more territory from Islamic State. Turkey sees the YPG as one and the same as the armed wing of the Kurdistan Workers’ Party (PKK), with which it is fighting domestically. Turkey is increasingly concerned that Rojava will be a permanent fixture and that it will embolden the PKK.

Consequently, Turkey has been seeking to have the US end its support for the YPG. There had been hope in Turkey that the change in administration would lead to a change in policy. Turkey’s pro-government press has praised President Trump since his coming to power, reflecting this hope and the hope for a resetting of Turkey-US ties, which had soured under Obama. However, President Trump appears to be continuing the Syria policy of his predecessor, even increasing support and US presence on the ground. President Erdogan’s visit was seen in part as a last ditch attempt to reverse this decision. In that respect, the visit appears to have been a failure.

Nonetheless, in another sense, the visit was a positive one for President Erdogan and this positive aspect is the message that he is bringing home with him. The two presidents spoke highly of the other during the visit and appeared to establish a friendly rapport. Erdogan called Trump a “practical, clear man, who does not shy away from saying what he thinks”. A pro-government pundit compared the two men, praising their practical and straight-talking approach. Since his election campaign, Turkey’s press has remarked on the similarities in style between the two leaders, both positively and negatively. Neither Turkey’s government nor its friendly press appear to have given up on the hope of better ties with the US under Trump.

Indeed, the same pro-government commentator wrote that while the threats to Turkey in its region caused by the US’ actions have not decreased, this is not the fault of Trump rather of the US’s system. This builds on the narrative employed by Turkey’s government and voiced by Erdogan while in Washington. This holds that the country’s problems with the US are a hangover from the Obama administration. In line with this, Foreign Minister Mevlut Cavusoglu on returning to Turkey called for Brett McGurk, appointed under Obama as US envoy to the coalition against Islamic State, for being too supportive of Kurds. By sticking with this narrative in the face of disappointment, Turkey’s government demonstrates it is banking on reaping some benefit from good ties with the US at some point in the future.

Both sides put on a friendly face for the meeting and allowed chemistry to develop between their respective entourages. Notably, the translation of Erdogan’s statement at the two Presidents’ joint statement session held two significant mistakes. The statement, which was translated live as Erdogan read it out, was pre-prepared and had most likely already been translated. Erdogan’s praise for Trump’s correcting the US’ course following the mistakes of the Obama administration on Syria was translated as Erdogan accepting Turkey’s mistakes in Syria. Similarly, Erdogan’s description of the YPG and PYD as terrorists was omitted by the translator.

These mistakes may have been simply human error. Whatever the explanation, they offer a fitting allegory for the meeting, of allowing unwanted disagreements to be lost in translation for the sake of a reaffirming of this long-term alliance. Erdogan raised the issues he needed to raise and stood up for the geopolitical issues that matter to many of Turkey’s voters, and this will be seen in Turkey. Erdogan will also have been seen to be on good terms with the leader of the most powerful country in the world.

The future of Turkey-US relations will likely continue to be impacted by the personalities at the top. There was anger in the US over the clash between President Erdogan’s bodyguards and anti-Turkey protestors during the visit. Incidents such as these, while appearing not to faze Trump, do little to improve Erdogan’s image in other circles. This raises the question as to how relations would fare if the US were to elect a president more in line with Trump’s predecessor.