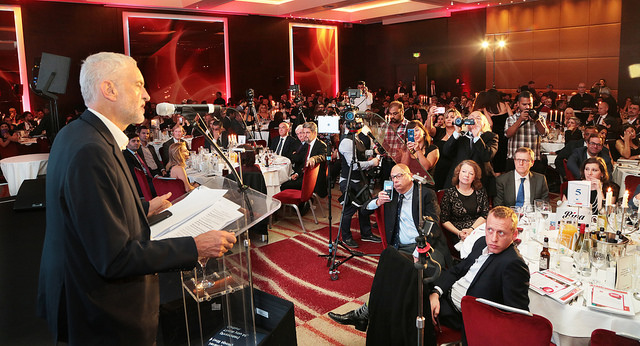 On Monday 15th October 2018, the Centre for Turkey Studies (CEFTUS) hosted its 7th Anniversary Gala with over 500 guests at the Park Plaza Riverbank Hotel.

Commemorating the founding of CEFTUS 7 years ago, the event celebrated the achievements of CEFTUS over the last year in building bridges between Turkey and the UK. In addition to the gala, CEFTUS also celebrated the achievements of the Turkish, Kurdish and Turkish Cypriot communities in the UK with its annual Community Achievement Awards, recognising excellence in fields such as law, business, education and politics (see below for award winners). Guests, including parliamentarians and ambassadors, enjoyed a delicious three-course Turkish meal and excellent performances from Turkish musical acts Tuğba Özcivan and band, and Bertuğ Cemil and band.

The event was well attended by many politicians from various political parties, including Leader of the Labour Party Jeremy Corbyn and his wife Laura Alvarez, who gave a speech, thanking the contributions of the Turkish, Kurdish and Cypriot Communities to the UK and commending Turkey for housing almost 4 million refugees. Sir David Amess MP also spoke and drew attention to the potential for closer relations between Turkey and the UK in the wake of Brexit. Stephen Kinnock MP presented an award and applauded the work of CEFTUS in the community. Mayors in attendance included Christopher Wellbelove of Lambeth, Mohammed Bakhtiar of Kensington and Chelsea, Dilip Patel of Havering, Glyn Hibbert  of Hawkinge and Samia Chaudhary  of Hounslow, in addition to a number of local councillors. CEFTUS also hosted various ambassadors from around the world, trade unionists and journalists, many of whom presented awards. Prominent figures from the world of business were also in attendance, and delegations were sent from the sponsors – Cobra, JustEat, Holland Bazaar, Mexica Products, Bira London, the British Kebab Awards, and Alton & Co. Cobra chairman Lord Bilimoria and JustEat’s Ben Carter both spoke, congratulating CEFTUS on the organisation’s achievements and speaking of their own company’s successes.

Figures from across the political spectrum in Turkey also attended, as did prominent Turkish journalists such as Cengiz Candar, and human rights activists such as Barbaros Sansal. The breadth of guests at the gala reflected CEFTUS’ ambition to provide open dialogue and to listen to all sides of the debate, encompassing all shades of opinion.

In his speech, CEFTUS founder and director Ibrahim Dogus thanked all the guests and sponsors. He made an impassioned speech, calling for Turkey to release from prison those whose “only crime is dissent” and voicing a shared desire for  “a Turkey which is economically strong, democratic and a good neighbour, not a Turkey sliding into internal repression and external aggression.”

The winners of the Community Achievement Awards 2018:

Businessperson of the Year Awards

Community Centre of the Year Awards

Briefing on Turkey’s stance on energy in the Eastern Mediterranean