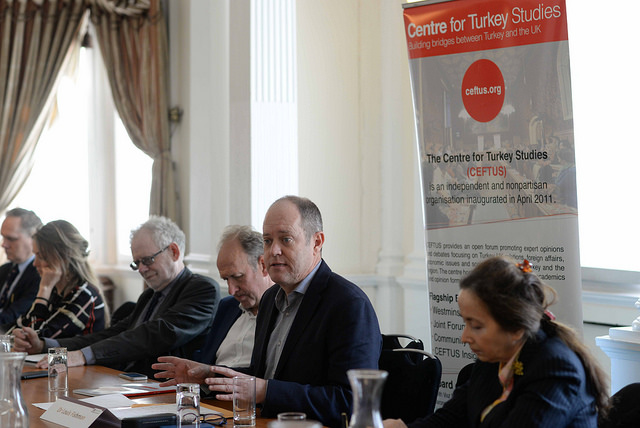 The Centre for Turkey Studies and the Royal United Services Institute (RUSI) held an exclusive roundtable with Dr Louis Fishman on Turkish-Israeli Relations.

This exclusive roundtable was kindly chaired by Michael Stephens, Research Fellow for Middle East Studies and Head of RUSI Qatar.

Dr Louis Fishman is an assistant professor of Modern Middle East history at Brooklyn College, City University of New York. Currently he is working on the last stages of his book on late Ottoman Palestine. He regularly contributes to Haaretz, where he writes about Turkish and Israeli affairs, in addition to writing and providing political analysis to media outlets in Turkey, Israel and the US. He divides his time between New York, Istanbul, and Tel Aviv. He finished his BA at Haifa University, and his MA and PhD at the University of Chicago. In addition to giving talks in Israel, he also has taught classes at Sabanci, Bahcesehir, and Okan Universities.

The meeting was held under the Chatham House rule.

Photos of the event can be found here.

Briefing on the implications of the Turkish lira’s decline

Briefing on Turkey’s support for US-led airstrikes in Syria