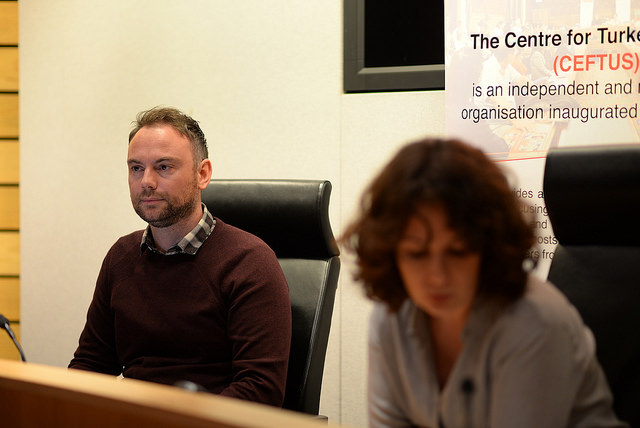 ‘The Passion: Football and the Story of Modern Turkey’

The Centre for Turkey Studies (CEFTUS) hosted Istanbul-based journalist Patrick Keddie in the Diskus Room of Unite House for the launch of his new book, ‘The Passion: Football and the Story of Modern Turkey’ on April 3rd. The event was opened by CEFTUS Deputy Director Buket Bora, who spoke of the importance of football in Turkey and welcomed the publication of a new in-depth study on the subject.

Mr. Keddie began by outlining his interest of in the topic, which began, he said, with witnessing rival fans groups putting aside their differences during the Gezi Protests of 2013. This inspired him to take an in-depth look at the role of football in Turkish society, and he became intrigued by the myriad ways in which the sport was bound up with issues of identity, culture and politics.

To illustrate this, Mr. Keddie gave an anecdote about President Erdogan, who in his youth was a semi-professional football player for a team associated with Istanbul’s transport authority. Following the 1980 military coup, the team was taken over by a figure associated with the military junta, who banned players from sporting facial hair associated with religious piety. Rather than shave, Erodgan is said to have resigned his position from the team in protest. This story, Mr. Keddie said, encapsulates the narrative on which Erdogan has sought to build much of his political career, as a figure standing up for religious-conservative voters against state repression.

Mr. Keddie then went on to speak about the way in which President Erdogan’s Justice and Development Party (AKP), like many of its predecessors in government, has sought to instrumentalise football for its own political ends. The most obvious example of this, he argued, was the way Erdogan and other senior AKP figures have a habit of wearing the local football team’s scarf during campaign rallies. He also highlighted İstanbul Başakşehir S.K., a relatively new team associated with the local municipality, which he said was the most successful attempt thus far to build a pro-government football club. However, despite doing well on the field, Mr. Keddie noted that Başakşehir S.K. has struggled to develop a fan culture and following to challenge the more established teams.

With this in mind, Mr. Keddie argued that football was also a site of contestation, including struggle against the government and other dominant forces in society. He mentioned the controversies around several teams associated with Turkey’s Kurdish minority, most notably Amed S.K., the players and fans of which have been banned by the Turkish Football Federation on several occasions for making what have been deemed to be political statements. Mr. Keddie also detailed the role of other minority groups in Turkish football, including women’s and LGBT teams, and the story of Halil Ibrahim Dincdag, who was dismissed from his position as a referee due to his sexuality.

The evening ended with a question and answer session that provided an in-depth discussion of many of the topics Mr. Keddie touched upon in his remarks, finishing with a brief outline of the early history of football in Turkey and the potential obstacles the sport faces at it looks to the future.

Patrick Keddie is an author, journalist and essayist based in Istanbul. A reporter for Al Jazeera, his writing has also appeared in VICE, the Guardian, the Huffington Post, the Irish Times, the LA Review of Books, Middle East Eye and the Sunday Herald among others.