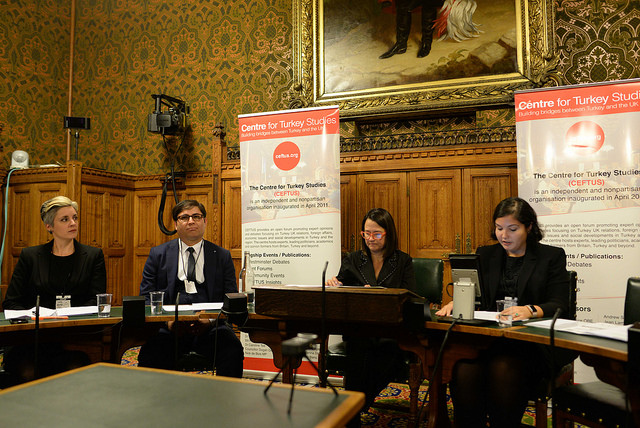 The Houses of Parliament

The Centre for Turkey Studies, in collaboration with the Alliance of Turkish Businesspeople (AOTB) held a Public Forum on the recent changes to the Ankara Agreement.

A selection of photos can be found here.

Ms West’s opening remarks highlighted the wider relevance of the Ankara Agreement discussion to the questions of who has the right to settle in Britain and to participate in the British economy, and noted her experience working with Turkish nationals in her role as an immigration case worker for David Lammy, prior to becoming an MP.

Leni Candan, one of the directors of the AOTB began the discussion by outlining how the sudden revocation of the right to indefinite leave to remain (ILR) compelled her, and others, to form the AOTB. Ms Candan noted how the lack of warning preceding the decision resulted in arbitrary outcomes for different individuals: those who had applied on 15 March 2018, the day before the announcement, are on the path to being granted ILR, while those who applied on 16 March have received only a three-year visa extension.

The shock, anger, and upset resulting from the unfair and arbitrary nature of the sudden policy change spurred Ms Candan and others into action. They began the Ankara Agreement Indefinite Leave to Remain Solidarity Facebook group, to fight the changes in a strategic and co-ordinated manner and to raise awareness in Turkey and in the UK. From this group developed the AOTB, which is composed entirely of volunteers who have been personally affected by the Ankara Agreement changes. Atop writing to MPs they, the AOTB has been working in collaboration with other migrant groups to share experiences and build solidarity.

The new settlement scheme requires five years’ residency as opposed to the previous four; it requires applicants to pass the Life in the UK Test where previously there was no such requirement, and there is a new application fee of nearly £2,500 per person. The key issue is that these requirements now apply retrospectively to those who were on the Ankara Agreement scheme before 16 March 2018.

Ms Candan outlined the detrimental effects of these changes. This unexpected extension to five years’ residency before being able to apply for ILR has resulted in uncertainty and financial difficulty for many businesses who could not have planned for the extension. Some businesses are struggling to secure mortgages, loans, and long-term lets on business premises without ILR. Those planning on sending their children to university are facing substantially augmented international university fees. For every renewal, the Ankara Agreement visa holder must surrender their passport to the Home Office for a substantial time interval, leaving them unable to travel abroad, rent a house, or open a bank account. This upheaval has led many Turkish businesspeople demoralised, Ms Candan argued, and struggling to maintain or find new clients with such an unclear future.

Some members of the community have been critical of the AOTB’s campaign, fearing that challenging the new agreement could result, counter-productively, in harsher conditions. Ms Candan responded to these fears by arguing that if the community did not stand up to these changes, the government could make further changes in the future and apply them retrospectively. Dealing with this concern in the question and answer session later, Barrister Emma Daykin further allayed fears by explaining that the British legal system does not operate on a system whereby those mounting legal challenges are ‘punished’ by harsher conditions.

Noting that the Ankara Agreement is an EU treaty, Ms Candan pointed out that when the UK leaves the EU, the government could potentially make further changes. To protect against the changes announced on 16 March, and possible future changes post-Brexit, the AOTB has filed for a judicial review claim. They are running a crowd funding campaign to cover the legal costs and have raised £60,000 of their £100,000 target. The AOTB has succeeded in galvanising solidarity and drawing attention to the issue. Prior to the AOTB, there was no formal body representing Ankara Agreement visa holders in the UK.

The AOTB’s solicitor, Yasar Dogan, spoke next, to outline the background of the Ankara Agreement. The Ankara Agreement is a treaty between Turkey and the EU, to which the UK became party when it joined the EU in 1973. The Ankara Agreement contains a standstill clause which prevents member states of the EU from introducing new restrictions to the rights to establishment of Turkish people in the host state. The standstill clause means that Turkish businesspeople can benefit from the more flexible immigration rules laid before Parliament in 1972. These rules effectively mean that so long as a Turkish person can show they have sufficient funds to establish a business that would in turn generate funds sufficient to adequately maintain themselves and any co-dependents, they would be granted 12 months leave to remain. If this period is successful, they would then be granted an additional period of three years leave to remain, after which point they would qualify for ILR.

Emma Daykin, the AOTB’s barrister explained the Aydogdu case – the ruling of which led to the March 2018 Ankara Agreement changes. The Aydogdu case was a case pertaining to the dependent of a Turkish businessperson. The case challenged the requirement for the dependent to live in the UK for two years prior to being granted ILR; the case was not related to the removal or ILR.

The Aydogdu case became a ‘lead case’, and then Home Secretary Amber Rudd argued that that as Turkish nationals did not need ILR in order to continue their businesses, the standstill clause did not apply to settlement applications at all. The presiding judge agreed to proceed with the case, and provided an advisory judgement that would allow the Secretary of State to consider how to go forward. It was upon the basis of this advisory judgement that the Secretary of State justified the change to the Ankara Agreement in March 2018. Both Mr Dogan and Ms Daykin stressed the importance of noting that the judge made only an advisory judgement, which did not contain a mandatory order requiring the Home Office to introduce any policy changes.

As the Home Office decided that the application of the Ankara Agreement in this scenario was mistakenly applied, and therefore unlawful, the two-year requirement for spouses did not apply in the Aydogdu case. Therefore, the Aydogdu family won their case. Their ability to appeal the decision was necessarily limited by the fact that they had won the case and been awarded their costs for having to litigate the matter.

Ms Daykin next outlined how she and other lawyers had tried and failed to appeal similar cases pertaining to ILR under the Ankara Agreement in the upper tribunal. Although they initially had positive responses, and there were mixed outcomes to the cases brought, as time went on it became clear that the upper tribunal lost appetite for these kinds of cases.

When the Home Office announcement was made on 16 March 2018, some 12 months after the outcome of the Aydogdu case in March 2017, the matter became more critical, as Turkish nationals were immediately affected. Ms Daykin emphasised how unusual it was for the Home Office to issue such a decision overnight, without any warning or consultation period.

In response to the 16 March announcement, the AOTB sent a pre-action letter warning the Secretary of State that they intended to challenge the decision on two primary bases. The first criticism is that the Aydogu decision, upon which the Ankara Agreement change was based, was incorrect. The second, is that there was a legitimate expectation that people who were in the scheme had reason to expect that the rules would not change (for the worse) owing to the standstill clause.  While the Secretary of State has the right and ability to change immigration law, policy changes must consider all relevant circumstances, such as whether changes are fair and within the public interest. As the Home Office has not provided any reason for why the policy changes are necessary, except for the ruling on the Aydogu case (which they dispute), this contradicts the legitimate expectation of people holding Ankara Agreement visas for it to continue unchanged.

The AOTB has issued the claim in the administrative court, a different venue to where all previous cases were tried, as they are challenging the new rules themselves. One benefit of this new venue is that they will get fresh eyes from the court on these issues. The AOTB requires permission to proceed with the case, which is likely to take between four and six months; a decision is expected early in the New Year. Once permission is obtained, there will be a further hearing where all these issues will be ventilated in their entirety.

Emma Daykin is a barrister who represents individuals against the Home Office in all aspects of immigration, asylum and human rights, at all levels. She is ranked as a leading junior for immigration in Legal 500, which states, “She is caring, well prepared and a powerful advocate.”

Emma has particular experience in claims, both judicial review and appeals, involving the Ankara Agreement and the position of Turkish nationals seeking to establish themselves in business or working in the UK.   In particular, she appeared as junior counsel led by Nathalie Lieven QC in R (otao Akturk) v SSHD [2017] WLR (D) 145; [2017] EWHC 297 (Admin), the lead case on the issue of abolition of the right of appeal for Turkish citizens seeking to exercise their freedom of establishment under the European Community Association Agreement (the Ankara Agreement) with Turkey.  The Judge held that the abolition is incompatible with the Agreement in that it breaches Article 41 (1) of the Additional Protocol (standstill clause) and that incompatibility is not avoided by Administrative Review. Emma was also counsel in EK (Ankara Agreement – 1972 Rules – construction) Turkey[2010] UKUT 425 (IAC).

Yasar Dogan specialises in Immigration and Nationality Law. He has a particular interest in the Ankara Agreement, having provided advice and representation in several applications, appeals and judicial reviews involving the Ankara Agreement since 2008. He is currently advising and acting in a number of judicial review cases challenging the legal propositions in the case of Aydogdu v SSHD.

Leni Candan is a communications consultant for not-for-profit organisations. After becoming impacted by the sudden changes to Ankara Agreement settlement rules only weeks before she was due to apply for settlement, Leni founded a campaigning group to fight the retrospective application of these changes. The group later became the Alliance of Turkish Businesspeople (AOTB) and has recently filed for permission to launch a judicial review challenging the retrospectively effective changes.

Briefing on the Turkey-Russia agreement on Idlib