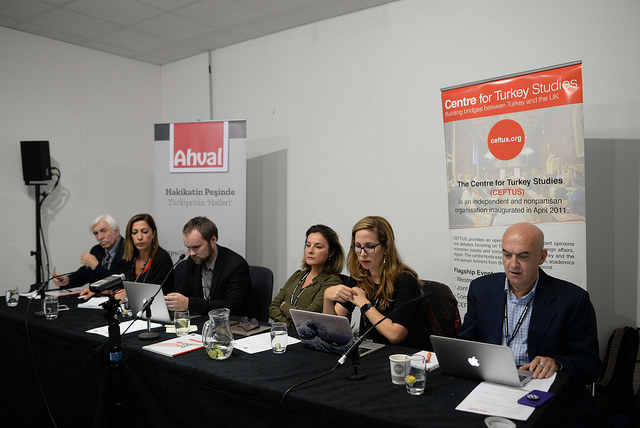 The Centre for Turkey Studies was at the Labour Party conference in Liverpool to collaborate with Ahval news for a panel discussion focusing on recent developments in Turkey and what they mean for the region. The event was kindly chaired by Alex MacDonald, journalist at Middle East Eye.

Giving introductory remarks, Angela Eagle MP conveyed her solidarity to those fighting for democracy in Turkey and highlighted Turkey as an example of the wider global phenomenon which has seen new forms of communication such as social media spread lies and propagate populism.

Afzal Khan MP, Shadow Minister of State for Immigration, expressed Turkey’s potential to influence the Muslim world, and called upon Turkey to set a strong example of democracy for those countries.

Finally, Fabian Hamilton MP, Shadow Minister for Peace and Disarmament and Shadow Minister for the Middle East and for Turkey called attention to the form of Turkey’s increasing authoritarianism, with people standing up for Kurdish causes being suppressed in the name of counter-terrorism. Hamilton expressed his wish to see Turkey return to its place within those nations that represent freedom, human rights, and human dignity.

Yavuz Baydar’s opening discussion focused upon the fast pace of change and intricate complexity of the war in Syria and its peripheral reverberations – at the epicentre, Baydar explains, is Turkey and the Kurds. The Syrian conflict, characterised by ‘wars within wars’ and ‘unknown unknowns’ resulting from conflicting intentions of numerous state and non-state actors, has become extremely difficult for any actor to navigate. Turkey’s policies have been extremely unpredictable, engaging in what Baydar describes as the total abandonment of strategic thinking and the total embrace of tactical moves. While Turkey faces ungovernability and systemic crisis, the Kurds’ aspirations for self-rule and independence hold the key to the conflict.

Dr Ayse Zarakol sought to complicate the stock ideas expounded inside and outside Turkey regarding the West’s role in Turkey’s current political and economic problems. Turkey is strained by its own specific problems, but was also affected by the great political miscalculations made by the West during the first decade of this Century. Turkey was artificially buoyed by the ‘irrational exuberance’ of the international community, which wanted to believe the rose-tinted story of impressive economic growth – in reality, unsustainably founded upon cheap credit – and the apparent successful combination of democracy, capitalism and Islam. As the Arab Spring unfolded, the West’s desire to make Turkey a model for the region led to overlooking domestic critics who voiced concerns long before the more recent and marked democratic deterioration.

Nurcan Baysal’s discussion of Turkish democracy focused on the human rights abuses which have proliferated in the last three years. Drawing on her own eye-witness accounts of the devastation caused to her home city of Diyarbakir, Baysal detailed the destruction to homes and lives caused by the prolonged curfews enforced since late 2015, which, unlike previous curfews, have regulated city centres. Kurds and Kurdish areas have suffered particularly in the state of emergency-facilitated crackdown on civil liberties since the 2016 attempted coup. Almost all Kurdish media, Kurdish civil society organisations and NGOs, even those helping the poorest families, have been closed. With many Kurds cut off from hospital treatment, activists imprisoned and militarisation of Kurdish areas, Baysal concludes that democracy has already left Turkey.

Cengiz Candar explained his belief that we have indeed witnessed the end of Turkish democracy with reference to the systemic characteristics of totalitarianism outlined by Carl Friedrich and other markers, particularly the power of nationalism, by Hannah Arendt. Drawing attention to the ‘terroristic police’, Candar described how the ‘Saturday Mothers’, who had gathered every week to mourn and honour their lost loved ones, was banned on grounds of ‘terrorism’, ending a peaceful display of grief dating back over 13 years. Candar ended his discussion by explaining how elections – now an obsession of Erdogan – have been designed such that Erdogan and his party cannot lose. Unlike Egypt where Presidents always win with nearly 100%, Turkey’s system only requires just over 50% – giving credibility to the process. This, Candar concluded, is an ‘ingenious way’ of ending democracy.

Yavuz Baydar is the Editor-in-Chief of Ahval, a trilingual independent online news site focused on Turkey. He has worked as news producer and reporter for the BBC World Service, the Swedish Radio & TV Corp, and Turkish newspaper Cumhuriyet. He has received several awards for his journalism, including the prestigious 2018 ‘Journalistenpreis’ from the South East Europe Association in Munich, and the 2017 Morris B Abram Human Rights Award from UN Watch. In 2014, he was a Shorenstein Fellow at Harvard Kennedy School of Government, where he undertook research on state oppression and threats to journalism in Turkey. He has lived in exile since the crackdown on media freedom following the July 2016 coup attempt.

Dr. Arzu Yilmaz is currently a IPC- Mercator fellow at German Institute for International and Security Affairs in Berlin, where she holds a research project on intra-Kurdish relations. She was the chair of the International Relations Department at American University of Kurdistan in the Kurdistan Region of Iraq. She has been a columnist at outlets including Radikal, Diken, Birikim, Arti Gercek and recently published a book on Kurdish refugees in Iraq.

Dr. Ayşe Zarakol is Reader in International Relations at the University of Cambridge and a fellow at Emmanuel College. She is the author of ”Hierarchies in World Politics”  and “After Defeat: How the East Learned to Live with the West”. An active member of the PONARS Eurasia international academic network, she has also held visiting fellowships with the Council of Foreign Relations, the Norwegian Nobel Institute and the University of Copenhagen.

Nurcan Baysal is a Kurdish writer and activist from the city of Diyarbakir in south-east Turkey, where she is one of few figures reporting from the inside of the Turkish-Kurdish conflict. She is a founder of the Platform to Save Women Kidnapped by ISIS and the Diyarbakir Political and Social Research Institute, as well as the author several books, such as “That Day” and “Those Voices”. She was recently named Global Laureate for Human Rights Defenders at Risk by Irish NGO Front Line Defenders and currently faces a number of criminal prosecutions in relation to her work.

Cengiz Candar is Distinguished Visiting Scholar at the Stockholm University institute for Turkish Studies and Associate Fellow at the Swedish Institute for International Affairs. He is one of the region’s most experienced journalists, having worked for various of Turkish media outlets. He has previously served as a special advisor to former Turkish president Turgut Özal, lectured at Bilgi University in İstanbul and completed scholarships at the Woodrow Wilson International Center and the United States Institute of Peace.