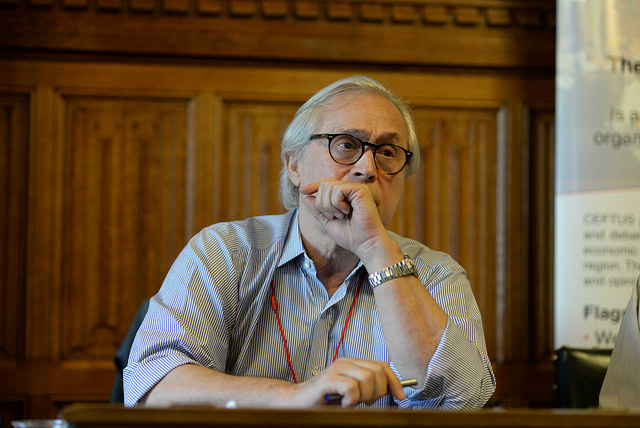 The Centre for Turkey Studies hosted political commentator Ali Bayramoglu for a discussion on Turkish politics ahead of the upcoming parliamentary and presidential elections. Bayramoglu, a veteran author and columnist, provided a background of recent developments in Turkey before offering his insights into what he expects to be the elections outcome.

The evening was kindly hosted by Siobhain McDonagh, Labour MP for Mitcham and Morden and Member of the All-Party Parliamentary Group on British Turks and Kurds, and chaired by Professor Ibrahim Sirkeci from the European Business School London, Regent’s University London.

Bayramoglu began by explaining that he had previously supported the ruling Justice and Development Party (AKP), which he believed had achieved a synthesis that could unite much of the different elements that make up Turkish society, including religious voters, Kurds and the elite. However, Bayramoglu went on to explain that Turkey had been on a journey over the more than 15 years of AKP rule and that, in his view, President Erdogan’s government now represented authoritarianism.

Bayramoglu noted that the AKP’ had increased its vote at almost every election, leaving the opposition despondent. However, he argued that there were three factors that could change this picture. The first of these, he said, is the ‘Kurdish Question’, which it is clearer than ever cannot be answered by violence.

The second, was the strength of Turkey’s electoral system, which stretches back to 1876. In Turkish history, Bayramoglu said, there had only been two clear cases of electoral fraud: 1913 and 1946. He pointed out that even after the country’s various military coups, there had been a quick return to voting. Without winning elections, Bayramoglu argued, the AKP could not remain in power.

The last factor, Bayramoglu said, was differences within the AKP’s support. Bayramoglu argued during its period in office, the AKP had transformed Turkey’s centre-right into a seemingly homogenous mass of voters, but differences in the AKP’s electoral base remain and are progressively becoming clearer.

For these reasons, Bayramoglu argued, there is potential for political change. The different opposition parties, he said, have worked better together than he had expected and were campaigning with energy and enthusiasm. Bayramoglu pointed to the emergence of the Felicity Party (SP) in particular, which he argued had reasserted itself as a credible alternative for conservative voters, including in the predominantly Kurdish region.

The newly formed Good Party (IP), Bayramoglu said, is also winning support from the centre-right and has been strongly critical of the government. Meanwhile, the main opposition Republican People’s Party (CHP), he said, has supported both the IP and the Kurdish-orientated Peoples’ Democratic Party (HDP), thereby strengthening the opposition as a whole.

The HDP, Bayramoglu argued, was fighting for its political life and had increasingly been targeted by anti-Kurdish language by the AKP and its allies in the far-right Nationalist Action Party (MHP). However, Bayramoglu said there was a growing sense among the middle classes that Kurdish people should be represented in parliament, and as long as the HDP crossed the 10% electoral threshold it was hard to see how the AKP could win a parliamentary majority.

Bayramoglu added that, while he was optimistic, it is difficult to know what the outcome of the election will be, with many people reluctant to respond to polling firms. He said that the most reliable data indicates that the AKP and MHP will not win enough seats to secure a majority in parliament. Instead, both the AKP-MHP alliance and the CHP-IP-SP alliance are currently polling at around 43%, with the HDP on between 9-11%, although Bayramoglu argued that the HDP may in fact get between 11-13%.

In the presidential election, Bayramoglu said there are several different possibilities. Overall, however, Bayramoglu argued that right-wing voters are likely to vote for Erdogan as they do not want to completely derail the AKP’s political project. The key question, Bayramoglu said, was if the AKP looses power in parliament, will conservative voters want to lose Erdogan as well? While there is disillusion with the Erdogan and the AKP, there remains support for its overall policies, Bayramoglu said.

Bayramoglu ended by saying the situation remains finely balanced, making the election’s outcome difficult to call. There are three possible outcomes, Bayramoglu argued: Either Erdogan wins both the parliamentary and presidential elections, only wins one election or he loses both. If the AKP wins the presidency but looses the parliament, he warned  it could trigger a serious political crisis.