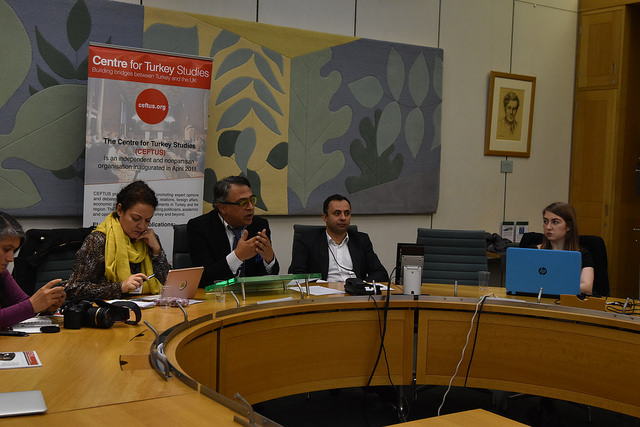 The Centre for Turkey Studies hosted Barbaros Şansal in the Grimond Room, where he gave both a personal and a political account of the evolution of LGBTI rights in Turkey.

The evening was kindly hosted by Joan Ryan, Labour MP for Enfield North and chaired by Ayla Göl.

Born in 1957, Şansal described the roughly two decades until the early 1970s as a relatively free time for gay individuals in Turkey, particularly for those from the upper echelons of society. He spent his early life working with his grandma making dresses for Nermin Erbakan, wife of the prominent Islamist politician and later prime minister of Turkey Necmettin Erbakan, amongst other Islamist politicians’ wives. Simultaneously, Şansal described a home life illuminated by socialising with many gay people.

This changed abruptly, Şansal argued, with the Turkish invasion of Cyprus of 1974. The invasion necessitated the propagation of a hyper-masculine nationalism to rally public opinion around the military intervention. This affected not only attitudes towards gay individuals, but also negatively affected progress toward gender equality.

Later in the same decade, Şansal himself was beginning to experience and experiment with Istanbul’s gay scene. With negative public sentiment further buoyed by a popular television program which showed areas of Istanbul frequented by gay and trans individuals as dangerous, ghetto-like areas, anti-LGBTI attitudes were swiftly transported around the country. Intensely violent raids on gay and trans areas of Istanbul were undertaken by a notorious police chief, Doğan Karakaplan. Şansal spoke of his first experience of arrest, detention, and torture in 1978.

Homophobia and transphobia were further propelled into the public sphere by the 1980 military coup and the following three years of military rule. Şansal went into exile until 1989 owing to his own engagement with the Marxist-Leninist organisation Dev-Sol (Revolutionary Left). Upon his return, Şansal began to enjoy significant success as a fashion designer with his business and romantic partner, Yıldırım Mayruk. Their international acclaim afforded them a warm welcome to the ‘high bourgeois Turkish Istanbul Bosphorus society’, but Şansal remained engaged with political activism and the defence of human rights.

Since the AKP’s rise to power in the early 2000s, restrictions on freedom of expressions intensified. Şansal highlighted the case of the drag queen performer Seyfi Dursunoğlu (also known by his stage name Huysuz Virjin), who was banned from performing on television in drag in 2007. Şansal described increasing violence against LGBTI communities and recounted the sexual violence he suffered at the hands of the police in the 2000s.

The Gezi Park protests, which brought together the disaffected from all sections of society, were a beacon of hope for LGBTI rights and freedoms. Şansal described walking with four friends into the park on May 27 2013 – the Gezi protests officially began on May 29, but they walked on May 27 to commemorate the same date in 1960, when military tanks rolled into Gezi Park and began the first coup d’état in the history of the Turkish Republic.

In 2003, Şansal was one of the first people to march for Pride in Istanbul. The Istanbul Pride march that followed the Gezi Park protests in June 2013, attracted some 75,000 people. Gay, trans and straight individuals marched alongside families and representatives from foreign diplomatic consulates. This, however, was described as the ‘the limit’ of the movement by Şansal. The force of the Gezi Park protests and subsequent Pride march was met by increased state oppression. Violence against LGBTI individuals increased and their murders ceased to be investigated. Meanwhile, Şansal argued, LGBTI figures who were supportive of the AKP were celebrated. Şansal described the ‘two-faced’ dichotomy of the murder of his trans friend Hande Kader during the Pride 2014 march, which was not investigated, while prominent trans figure Bulent Ersoy was entertaining at the Presidential Palace. Being LGBTI is not in and of itself a problem in the eyes of the AKP government, Şansal argues, but LGBTI figures who are in opposition to the government are targeted.

Şansal ended his talk by criticising Western governments for putting trade above human rights when dealing with Turkey – what he described as a ‘faceless’ strategy. He asked that LGBTI individuals and communities be at the forefront of Western programmes designed to help them. Şansal had hope for the ongoing struggle for LGBTI rights and freedoms in Turkey, but stressed that this was a fight that was about being gay, being Turkish, and being Muslim – that these three attributes could not be separated or delocalised.

Barbaros Şansal is a fashion designer and political activist. Şansal is a graduate of the Royal Academy of the Arts in London and has also studied in Switzerland, France and Germany. He became widely known for his political activism after criticising the police’s excessive force during the Gezi Protests on Halk TV. After spending two months in prison awaiting trial for ‘inciting the public to hatred or hostility’ Şansal wrote about his treatment in prison in a book about his arrest, and the attempted lynching that had preceded it.  Şansal has lectured on the history of fashion at Marmara University and Ankara Baskent University in Turkey. Şansal has hosted several TV shows and is the author of several books.

Briefing on the implications of Jamal Khashoggi’s disappearance