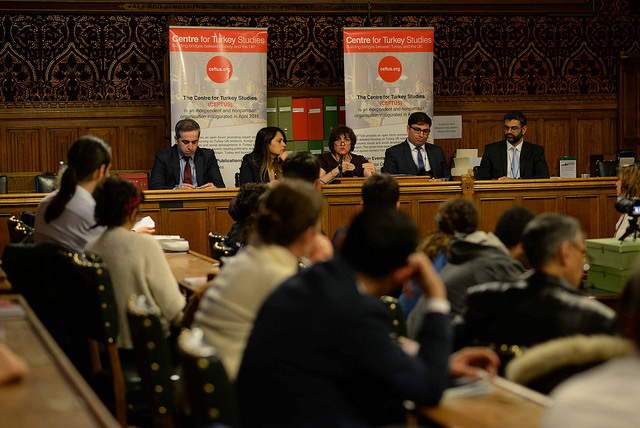 The Centre for Turkey Studies held a panel discussion of legal experts focusing on recent changes to applications for visas under the so-called ‘Ankara Agreement’ in Committee Room 10 of the Houses of Parliament.

The event was kindly hosted by Sir David Amess, Conservative MP for Southend and Vice-Chair of the All-Party Parliamentary Group on British Turks and Kurds.

The evening was chaired by Mrs Aysegul Yesildaglar, a former Turkish Attache for Labour and Social Security in Stockholm, Rotterdam, Brussels and London.

Mr Saeed opened the panel with a brief history of the Ankara Agreement, which has formed the basis of Turkey’s relationship with the European Union. He then went on to explain the implications of Ankara Agreement for Turkish citizens seeking to enter and remain in the UK, adding that the government had increasingly sought to restrict its provisions and had now rejected them almost completely.

Mr Yasar Dogan provided details of the decision by the Upper Tribunal of the Immigration and Asylum Chamber in March 2017, which has provided the basis for the government’s decision to suspend indefinite leave to remain applications under the ‘Ankara Agreement’. He emphasised that nothing in the judgement was mandatory and that the changes contravene several recent rulings by the European Court of Justice. Mr. Dogan is representing the individuals involved in the March 2017 decision and said that, while it could no longer be appealed, a further case was being prepared, with others likely to follow.

Mr Ozan Askin put the discussion of the Ankara Agreement in a political context, arguing that the recent experience of the ’Windrush Generation’ showed that the government was implementing harsh measures against migration. He argued that the terms of the UK’s future relationship with the EU would be crucial, particularly the decision to the stay in the customs union, which is closely linked the Ankara Agreement.

Ms Semira Dilgil explained that she had already submitted a series of documents to the Home Office to challenge the recent changes, including letters sent to those who had made the initial steps under the Ankara Agreement which state that they would be allowed to apply for indefinite leave to remain. She criticised the arbitrary way in which the decision had been made and insisted that it could be changed through a combination of legal and political pressure.

This was followed with a question and answer session, including a contribution from the person involved in the Upper Tribunal of the Immigration and Asylum Chamber’s decision in March 2017.

The evening ended with a consensus to continue to push the government on the issue through both formal and informal channels.

Please read our updated briefing on the Ankara Agreement and the status of Turkish nationals in the UK, which can be found here.

Saad Saeed has been working in the legal field for over 16 years. He has been a qualified solicitor for over 10 of those years and a Solicitor Advocate (Higher Courts Civil Proceedings) for over 6 years. He currently works as a Solicitor for Aman Solicitors Advocates in their Wembley office. Saad specialises in the fields of immigration and employment law. Saad has a keen interest in the Ankara Agreement in the immigration context and has a vast array of experience regarding the Ankara Agreement, having advised numerous individuals about making applications for entry clearance, leave to remain, and indefinite leave to remain. Saad has also represented many individuals in the Tribunals when their applications for leave have been refused. Saad was the instructing solicitor in the case of ZY (Turkey) v Secretary of State for the Home Department [2011] EWCA Civ 65 and also represented Kadir Ascioglu in the Court of Appeal case of Ascioglu v Secretary of State for the Home Department [2012] EWCA Civ 1183.

Ozan Askin is a Personal Injury and Civil Litigation Solicitor with over 8 years of applied Legal experience. Askin studied Economics at SOAS, worked for two years at HSBC before moving over into the legal sector and he started his own law firm, Silvine Law in 2017. He used to be a committee member of the main Cemevi and the British Alevi Federation. He received the Lawyer of the Year 2017 award as part of the Turkish, Kurdish and Turkish Cypriot Community Achievement Awards by the Centre for Turkey Studies in October 2017.

Semira Dilgil is the Head of Private immigration and one of the founding Partners of Ashton Ross Law. She is particularly skilled in all aspects of Turkish migrant immigration and has had over 15 years’ experience in the industry. Semira’s department aims to provide effective bespoke immigration advice and assistance for both individuals and companies. Over the course of her career, Semira has developed an extensive range of high profile contacts within the Turkish community and has provided legal advice and assistance to some of the largest and well- known Turkish companies including those from the legal, oil, gas, financial, textile and investment sectors. The private immigration department covers all areas of private immigration law, from nationality to further leave and indefinite leave to remain visas as well as all stages of appeals. Semira’s specialist areas however involve the Tier 1 and Tier 2 categories as well as the ECAA categories (the “Ankara” applications) which apply exclusively to Turkish nationals who wish to enter or remain in the UK in connection with a business. Prior to joining Ashton Ross Law, Semira was a partner of a large city based law firm. She also worked at leading city based immigration practice as a senior consultant.

Aysegul Yesildaglar is currently the Principal of Docklands Academy London, a higher education college based in Canary Wharf, London. She has had her BA degrees in the fields of English Philology and Business Administration. She holds MA degrees in English Language Teaching and European Social Security Law. She worked for Ministry of Labour and Social Security, Turkey in 1988 and served as the Attache for Labour and Social Security in Stockholm, Rotterdam, Brussels and London until May 2010 for a period of 4 years in each secondment. During her post in Brussels and at the Ministry of Labour and Social Security in Ankara, she expanded her expertise in EU Social Policy Law, the social dimension of Turkey-EU Association Agreement (Ankara) and the judgments of the European Court of Justice on Turkish citizens. She was appointed as the Head of European Coordination Department of the Ministry in 2003, where she was involved in the negotiations between Turkey and EU with respect to the social policy chapter. During her office she pioneered in the introduction and implementation of EU projects in Turkey. She held this post until 2005 when she was seconded to the Turkish Consulate in London, where she provided services and counselling for both Turkish and British citizens in the fields of labour and social security. During her post at the Turkish Consulate in London, she initiated the process of setting up a permanent dialogue platform between Home Office and the Turkish Consulate.