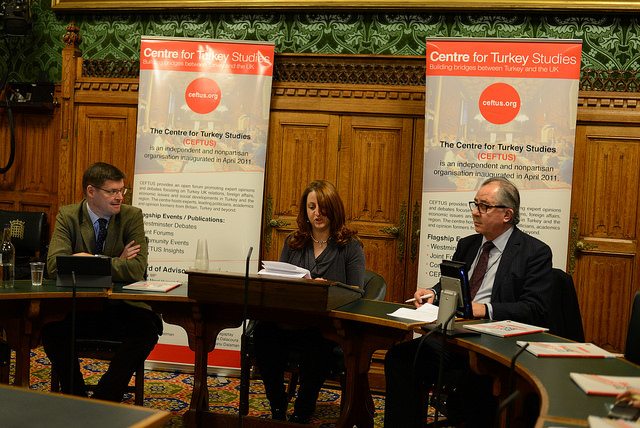 The Centre for Turkey Studies (CEFTUS) hosted Dr James Ker-Lindsay, Professor of Politics and Policy at St Mary’s University, Twickenham and Ilker Kilich, former Republican Turkish Party (CTP) UK President, in the House of Commons for a discussion on what elections in the north and south of Cyprus mean for the future of the island and the talks over reunification.

The event was kindly hosted by Faisal Rashid, Labour MP for Warrington South, and chaired by Ipek Ozerim, editor of T-VINE Magazine.

Ilker Kilich, a vastly experienced political activist from Cyprus’ Turkish community, began by expressing his dismay at the failure last July of UN-led talks in Montana. He said that the disappointing outcome had been a blow to those in the north of the island who were in favour of reunification and had bolstered those who did not want a negotiated settlement, many of whom were now calling for a referendum on joining Turkey. The only way to reverse this atmosphere, Mr. Kilich argued, was to again restart the talks.

Mr Kilich said that a bid to return to the negotiating table had been aided by the decision to move elections in the north of Cyprus forward to January, allowing the possibility of talks to resume after corresponding elections in the south later this month. He then offered his analysis of the January election, arguing that the result had been somewhat misunderstood by his colleagues in the south. Electrical gains by right-wing parties, Mr Kilich said, did not necessarily have poor implications for the negotiation process. Instead, the topic of reunification did not feature strongly in the election, and there remains strong support for a solution in the north.

Mr Kilich went on to say that, although there were many different coalitions were possible, the most likely outcome was a government formed through an alliance between the National Unity Party (UBP) and the People’s Party (HP). He then offered a defence of his own Republican Turkish Party (CTP), which he said had essentially sacrificed some of its members of parliament in order to take a more coherent position on ‘the Cyprus problem’. He also roundly criticised the political atmosphere in the north for being too dominated by money from questionable business interest, which he argued was damaging the quality of public debate.

Mr Kilich ended by emphasising the importance of keeping the negotiating process going even if there is no final solution in sight. However, he said that significant progress was unlikely before the 2019 elections in Turkey and the UK finalising the Brexit negotiations.

Dr James Ker-Lindsay, who specialises in conflict resolution in the region and was part of the UK delegation to the Montana talks, began by taking up Mr Kilich’s point that the collapse of the negotiations had been a significant blow. He said the UN delegation in particular had been disappointed by the outcome of the talks, which they had put significant effort into, and would require concrete progress before committing to a similar process again.

Dr Ker-Lindsay then offered some tentative predictions for the elections to be held in the south of the island at the end of January. He said that while the current president, Nicos Anastasiades, was likely to comfortably win the first round, the second round runoff had the potential to be much less predictable. The election of  Anastasiades for a second term would likely result in restarting reunification talks, Dr Ker-Lindsay said, but even then they would not start immediately.

Dr Ker-Lindsay warned the administration in the north of Cyprus against taking unilateral action, arguing that the recent examples of the unsuccessful Catalan and Kurdish independence referendums showed that there was little international appetite for such action. He said that potential annexation of the north by Turkey was a bigger risk after the precedent set by Russia in Crimea. However, he agrued that such a move was still unlikely, and would permanently end Turkey’s bid to join the EU.

Dr Ker-Lindsay ended by emphasising that he thought an organic process may be the best way of reaching a solution. He said the Greek Cypriot community should not be afraid of encouraging their Turkish counterparts to engage with the outside world, particularly the EU, but that the Turkish Cypriot Community needed to do more to demonstrate their willingness to act independently of Ankara.

Dr James Ker-Lindsay is Professor of Politics and Policy at St Mary’s University and Senior Visiting Fellow at the London School of Economics and Political Science. He has published numerous books on Cyprus, including Resolving Cyprus: New Approaches to Conflict Resolution (I.B. Taurus), The Cyprus Problem: What Everyone Needs to Know (Oxford University Press), The Government and Politics of Cyprus (Peter Lang, co-edited with Hubert Faustmann), and EU Accession and UN Peacemaking in Cyprus (Palgrave Macmillan).

Ipek Ozerim is the editor of T-VINE Magazine, an English consumer publication for British Turks. She is also the co-founder of Embargoed!, a UK-based Turkish Cypriot human rights group.