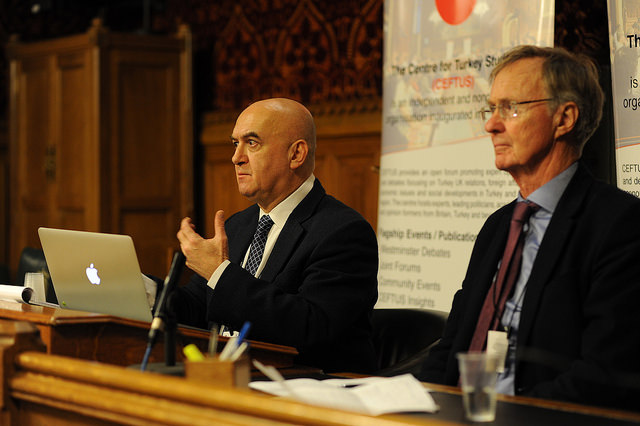 the Centre for Turkey Studies hosted Yavuz Baydar in Committee Room 10 for a discussion on domestic developments in Turkey. Baydar, a veteran journalist who has recently helped to found the Ahval news organisation, spoke eloquently about recent Turkish history and what he called a dramatic reversal in the country’s direction.

Baydar opened by saying that there were too many complex factors to say that Turkey’s ‘U-turn’ was inevitable. In retrospect, he argued, the internal structures of the ruling Justice and Development Party (AKP) were not resilient enough to challenge the centralisation of power in one figure; Turkey’s main opposition was too weak and visionless; dark forces within the ‘deep state’ had continued to the continued to exert their influence; and the already rotten state of the media deteriorated further; all of which had played their own role.

Baydar said he thought the 2011 elections were a crucial moment. The AKP’s overwhelming victory, he argued, helped convince then-Prime Minister Erdogan that the masses of the population were behind his party, but that further reform was only likely to weaken his position. In particular, the AKP’s drive to unify the country’s various intelligence mechanisms had caused turmoil behind the scenes, the impact of which, Baydar said, is only now beginning to be understood.

At around the same time, Baydar said, the Turkish media came under growing political pressure from the government, with critical voices removed in favour of increasingly sycophantic ones. Meanwhile, the Gezi Park protests led the other senior figures in the AKP to back-off from criticising their leader, giving Erdogan an opportunity to take personal control of the party which, until then, had largely been a microcosm of Turkey’s conservative right-wing currents. Similarly, during the 2013 corruption probe against the government, Baydar argued, the judiciary and police had shown insufficient resilience against the political executive’s attempts to bend them to its will.

Baydar then went on to discuss the ‘watershed’ elections on the 7th of June 2015, at which the AKP lost its parliamentary majority amid the rise of the Kurdish-focused Peoples’ Democratic Party (HDP). This, Baydar argued, led Erdogan to end the peace-process with the Kurdistan Worker’s Party (PKK) and realign with ultranationalist elements both within the state and the far-right Nationalist Action Party (MHP), resulting in a victory at a rerun of the elections in November 2015. This new mix of Islamism and nationalist, he said, is crucial to understanding the new politics in Turkey.

Baydar ended by saying that the latest changes to the constitution, which he said had created a ‘super presidency’, will make it very hard for the opposition to come to power. This, he argued, had been exacerbated by the conditions of emergency rule introduced after the failed coup, which had had a devastating effect on Turkey’s civil society, with hundreds of journalists arrested and many media groups shut down.

Yavuz Baydar is the Editor-in-Chief of Ahval, a trilingual independent online news site on Turkey. He has been a journalist for nearly 40 years. Baydar was among the co-founders, in 2013, of the independent media platform P24 to monitor the media sector and the state of journalism in his home country. His opinion articles have appeared in the Guardian, Süddeutsche Zeitung, New York Times, El Pais, Svenska Dagbladet, Yomiuri Shimbun, the Arab Weekly, and Index on Censorship. He wrote regular opinion columns for the Turkish dailies Today’s Zaman, Bugun and Ozgur Dusunce. Turkey’s first news ombudsman, beginning at Milliyet daily in 1999, Baydar worked in the same role as reader representative until 2014.

He served as president of the U.S. based International Organizaton of News Ombudsmen (ONO) in 2003. In 2014, as a Shorenstein Fellow at Harvard Kennedy School of Government, he completed an extensive research paper on self-censorship, corruption of ownership in Turkish media, state oppression and threats over journalism in Turkey – in the wake of Gezi Park protests. Baydar worked as producer and news presenter in Swedish Radio &TV Corp. (SR) Stockholm, Sweden; as correspondent for Scandinavia and Baltics for Turkish daily Cumhuriyet between 1980-1992, and the BBC World Service, in early 1990’s.

Baydar has recently been given the prestigious ‘Journalistenpreis’ by the SüdostEurope Gesellschaft in Germany. Earlier, he was delivered the Special Award of the European Press Prize (EPP), for ‘excellence in journalism’, in 2014, and, in 2017, Morris B Abram Human Rights Award by UN Watch. He was also given the Umbria Journalism Award, Italy, in March 2014, and Caravella ‘Mare Nostrum’ Award, by the organization ‘Journalists of the Mediterranean’, in Puglia, Italy. He has lived outside Turkey since the July 2016 coup attempt.