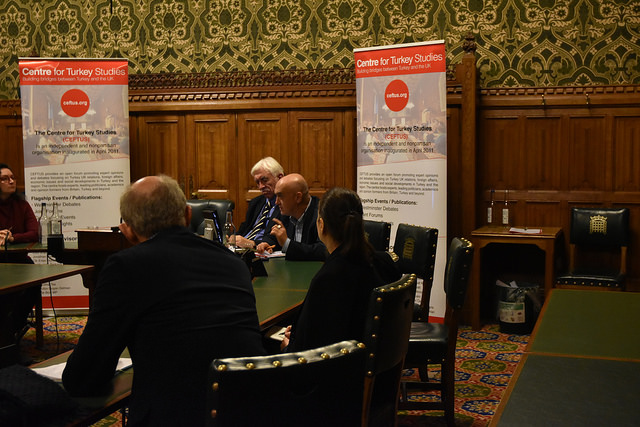 The Centre for Turkey Studies hosted Yavuz Baydar and Cengiz Candar in Committee Room 5 of the Houses of Parliament for a panel discussion on Turkey’s place in the world. The two vastly experienced journalists tackled what has been described as the country’s nationalist turn, putting it in both a domestic and international context.

The evening was kindly hosted by Hugh Gaffney, Labour MP for Coatbridge, Chryston and Bellshill and chaired by Dr Ipek Demir, Associate Professor of Media, Communication and Sociology at the University of Leicester.

Yavuz Baydar, Editor-in-Chief of recently founded news organisation Ahval, opened by outlining the challenges faced by political activists and the media in Turkey. He noted that, that very day, Can Dundar and Ilhan Tanir, former colleagues at critical media outlet Cumhuriyet, had been the target of an Interpol red notice issued by a court in Istanbul. Prominent Human Rights campaigner Nurcan Baysal had also faced charges in Diyarbakir of denigrating the government for her criticism of the recent military intervention in Syria. Meanwhile, journalists Ahmet Altan and Nazli Ilicak continue to serve lifetime sentences and the fate of liberal philanthropist Osman Kavala remains unknown.

Baydar drew parallels between these cases and the position of American Pastor Andrew Brunson, who he said had undergone a Kafkaesque ordeal following his detention on seemingly contradictory charges of supporting both the Gulen movement, the religious order widely accused of initiating the 2016 military uprising, and the Kurdistan Worker’s Party (PKK). Brunson has recently been freed, but Baydar pointed out that three more US embassy staff remain in prison and are unlikely to be released given their lack of political significance to the Trump administration.

Baydar then set out the scale of the post-coup attempt purges in Turkey, stating that 170,000 people had lost their jobs, of which 143,000 have been arrested with little recourse for appeal. 6,000 academics have been summarily dismissed along with around one third of the judiciary. At the same time, 970 companies have had assets worth 11 billion dollars confiscated by the state, a move Baydar compared to the seizure of Armenian wealth in the final days of the Ottoman Empire.

Turning specifically to the media, Baydar said that 190 outlets had been closed, and in several cases had their digital archive deleted. Between 176 and 320 journalists remain in Turkish jails, making up half of the total worldwide. Cumhuriyet, one of the last remaining independent newspapers, was recently subjected to a divisive change in management which, he said, was akin to a ‘coup’ and appears to have been linked to the government.

Other similar outlets continue to face political and economic pressures, with printed press in particular facing financial issues amid a hike in the price of paper. Television channels, the most common news source in the country, are almost all under indirect government control, leaving the diaspora media to play an increasingly important role with limited resources.

Curbing the flow of public information, Baydar argued, was the culmination of the merging together of various authoritarian forces in Turkey. The post-coup purges, he said, have simply been the final step in a process that has seen nationalist and Islamist forces join together against a series of ‘internal enemies’ including Gulenists, Kurds, and liberal reformers. As long as the media remains in such a state, the future is bleak.

The evening then moved on to journalist and analyst Cengiz Candar, who began by saying that Turkey’s ‘drift east’ had been ongoing for at least the last ten years. The ‘West’ from the point of view of Turkey has always meant NATO and the EU, he said, but both of these have fundamentally changed over time. Since the end of the Cold War, NATO has lost its raison d’etre, while the EU under the leadership of France’s President Nicholas Sarkozy and Germany’s Chancellor Angela Merkel sought to downgrade Turkey’s accession to ‘privileged partnership’.

At the same time, Candar said, the ‘Arab Spring’ saw Turkey’s inherently Eurosceptic government look to the Middle East. Here, the Muslim Brotherhood, a movement with which the Turkish government shares an ideological affinity, was seemingly in the ascendency, opening the possibility of Turkey becoming a renewed power in the Islamic world. Candar argued that Samuel Huntington’s description of Turkey as divided by identity was correct, and in these circumstances the dominant power structure increasingly embraced the ‘East’.

Candar explained he had experienced all four coups in Turkey’s history but 2016 was different, involving only around 5 per cent of the military. The government also appears to have had advanced warning, he argued, allowing it to quickly act against those it deemed responsible with surprising efficiency. But in the post July 2016 period, a new power structure emerged, which Candar described as ‘Muslim Nationalism’, with President Erdogan at its centre.

The foreign policy of this new power structure, Candar said, is ideologically driven by an alliance with Qatar, the Muslim Brotherhood’s key backer, against Saudi Arabia, the United Arab Emirates and Egypt, resulting in two competing Sunni power blocs. Simultaneously, he argued, the conflict in Syria has seen Turkey work closely with Russia and Iran, often against the interests of the US. Despite this, Candar said, the Turkish government has not lost much of its standing in the West, with President Erdogan regularly hosted in Washington and European capitals, thus Turkey has drifted East while remaining anchored in the West.

Yavuz Baydar is the Editor-in-Chief of Ahval, a trilingual independent online news site focused on Turkey. He has worked as a news producer and reporter for the BBC World Service, the Swedish Radio & TV Corp, and Turkish newspaper Cumhuriyet. He has received several awards for his journalism, including the prestigious 2018 ‘Journalistenpreis’ from the South East Europe Association in Munich, and the 2017 Morris B Abram Human Rights Award from UN Watch. In 2014, he was a Shorenstein Fellow at Harvard Kennedy School of Government, where he undertook research on state oppression and threats to journalism in Turkey. He has lived in exile since the crackdown on media freedom following the July 2016 coup attempt.

Cengiz Candar is Distinguished Visiting Scholar at the Stockholm University Institute for Turkish Studies and an Associate Fellow at the Swedish Institute for International Affairs. Cengiz Candar is one of the region’s most experienced journalists having worked for a number of Turkish media outlets. He previously served as a special advisor to former Turkish president Turgut Özal, lectured at Bilgi University in İstanbul and completed scholarships at the Woodrow Wilson International Center and the United States Institute of Peace.