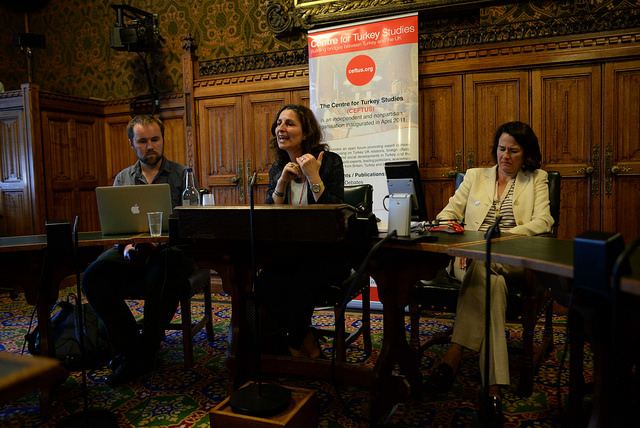 The Centre for Turkey Studies hosted Professor Gulcin Ozkan in Committee Room 8 of the Houses of Parliament for a discussion on the state of Turkey’s economy ahead of the upcoming general election on June 24. Professor Ozkan, a lecturer at York University specialising in macroeconomics, spoke with fluidity about the challenges facing Turkey economy and the need for reform.

The evening was kindly hosted by Catherine West, Labour MP for Hornsey and Wood Green, and chaired by Alex MacDonald, journalist at Middle East Eye.

Professor Ozkan started with a discussion of the major currency and banking crisis that struck Turkey in 2001 as part of a number of crises to hit emerging markets from the mid-1990s. This she said, had paved the way for a period of serious reform under the auspices of the IMF that continued under the early years of the Justice and Development Party (AKP) government. Such ‘first generation’ reforms included sustainable fiscal policy and a dominant monetary policy under an independent central bank.

Equally important, Professor Ozkan argued, was the creation of institutions to regulate and monitor the financial system. These, she said, were crucial to Turkey’s ability to navigate the 2008/2009 global financial crisis, allowing the country to quickly recover like many of the other emerging economies.

However, by 2007 cracks had began to appear in Turkey’s policy aming institutions, Professor Ozkan said, including differences between the central bank and the prime minister’s office over monetary policy. These grew increasingly significant from 2011 onwards, with tension over whether interest rates should rise to combat inflation.

Professor Ozkan then went on to discuss the recent emergence of macroeconomic imbalances including high-inflation, high unemployment and a critical reliance on external finance. Turkey, she said, has to find external resources of roughly 230billion dollars, around a quarter of its national income, leaving the country reliant on global financial markets.

This, she said, has been made sustainable by developments in the global economy, with the turn towards non-conventional monetary policy such as exceptionally low interest rates and quantitative easing in the US and Europe, facilitating a flow of liquidity into the emerging markets. However, this era has now begun to come to an end, leaving Turkey potentially exposed.

In this vulnerable position, Professor Ozkan argued, Turkey is performing worse than many of its peer group and therefore faces huge challenges that require a new set of structural reforms. This includes ‘second generation’ reforms to sectors such as the labour market, education, taxation and the judiciary.

Based on her own analysis of 119 countries, Professor Ozkan said that countries with presidential systems produce less favourable macroeconomic performance than their parliamentary counterparts, including average lower growth and higher inflation, with worse economic inequality.

Ahead of Turkey’s move to a new presidential regime, Professor Ozkan said she was not optimistic that, whoever won the election, the necessary reforms will be undertaken.

Briefing on party candidates for the parliamentary elections

Briefing on Kurdish voters and the parliamentary elections