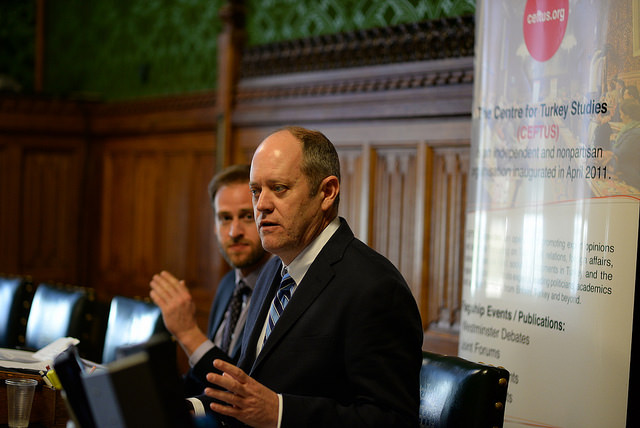 The Centre for Turkey Studies (CEFTUS) hosted Dr Louis Fishman in Committee Room 9 of the Houses of Parliament for a discussion on Turkey-Israel relations. Dr Fishman is a professor of Modern Middle East History at Brooklyn College, University of New York.

This event was kindly hosted by Mohammad Yasin MP for Bedford and chaired by Jonathan Friedman, political analyst and Director at Stroz Friedberg.

Dr Fishman opened by giving an overview of Turkey-Israel relations, arguing that there has been several ups and downs, but never a complete breakdown. He noted that relations between the two countries go back further than many usually recognise, including Turkey being the first Muslim country to officially recognise the state of Israel.

Dr Fishman argued that it was not until the 1970s that Israel became a domestic issue in Turkey, where it was a taken up by Turkish leftist groups embracing anti-colonial politics. While at the same time, the rise of political Islam saw a growth in anti-semitism in Turkish politics.

The height of Turkey-Israel relations, Dr Fishman said, was the 1990s. This was based on growing military cooperation, with Israel willing to sell Turkey weapons to fight the PKK. Similarly, the Israeli lobby became a useful ally in opposing the recognition of the Armenian Genocide in Washington.

Dr Fishman noted that the 1997 ‘post-modern’ coup came in part after a high profile anti-Israel protest. He said that this began to expose a gap between the Turkish military’s close relations with Israel and the growing criticism of Israel among Turkish political parties, which unanimously condemned events like the ‘Jenin Massacre’ in 2002.

Giving an overview of Justice and Development Party (AKP) era, Dr Fishman said that it had been marked by a slow and steady erosion of the military links between Turkey and Israel, but a growth in economic and trade ties. He argued that 2008 had been a crucial moment, with Turkey serving as an intermediary between Israel and Syria. However, progress was stymied by Israel’s ‘Cast Lead’ military operation in Gaza.

Since that point, Dr Fishman argued, there has been a series of rows marked by increasingly harsh rhetoric on both sides, including the Davos affair and Mavi Marmara incident. This peaked in 2014, when there was a surge in anti-semitic comments from a range of Turkish government ministers.

Despite this, Dr Fishman said, Israel-Turkey relations have continued to endure, primarily on the back of shared economic interests. For example, Istanbul has become a major hub for Israeli airline passengers, while Israel is now a gateway for Turkish exports to Jordan and Saudi Arabia.

Jonathan Friedman is a recognised authority on the Middle East, advising investors, government policymakers and non-profits on developments in the region. He previously worked for former US Vice President Joe Biden and regularly comments in international print and broadcast media, including for the BBC, CNN, CNBC, Reuters, Bloomberg, the Financial Times and the Wall Street Journal.

Briefing on Turkey’s role in Afrin