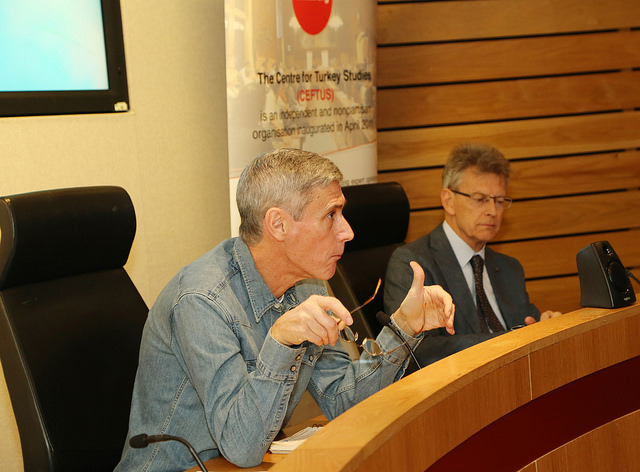 ‘Why Turkey is Authoritarian: From Ataturk to Erdogan’

The Centre for Turkey Studies (CEFTUS)  hosted the talk by Mr Halil Karaveli at Unite the Union on his new book, Why Turkey is Authoritarian, which is published by Pluto Press in partnership with the Left Book Club. The talk was kindly chaired by Mr Gamon McLellan, teaching fellow at SOAS, University of London. Mr Karaveli outlined the core arguments of his book, which applies a socialist lens to the question of persistent authoritarianism in Turkey.

Mr McLellan introduced the talk by noting the pertinence of Mr Karaveli’s century-long examination of authoritarianism in Turkey on November 1st, the day 100 years since the Ottoman Empire withdrew from World War 1. Mr McLellan outlined Mr Karaveli’s background as an established and respected author, focusing in particular on the topics of the historical legacy of Turkish state tradition, secularism, on Turkey’s Kurdish issue and on Turkish foreign policy in the Middle East.

Mr Karaveli began by describing his familial connection to the Left Book Club, which began in Britain in the 1930s. The book club became influential in the fight against fascism in the UK and – translated by Mr Karaveli’s father – its ideas spread to Turkey in the early 1960s, impacting the nascent social democratic movement. Like the book club, Why Turkey is Authoritarian aims to contribute to the development of leftist policies in Turkey and in Europe.

Mr Karaveli argued that the importance of understanding authoritarianism in Turkey has a relevance beyond Turkey’s own borders. Social democracy in Turkey and in Europe, compared to its golden era in the 1960s-70s, is very weak. Turkey should serve as a warning to the rest of Europe and as an example through which to study why the Left is proving incapable of mounting a defence against the rise of an authoritarian populist Right.

History teaches us – to put it simply – that without social democracy, democracy will fail. Mr Karaveli asserts that a strong labour movement is essential to the growth of democracy. While this has come to pass in many European countries, Turkey has missed out on such development because of the hegemony of the Right. Recent figures show that 70% of the Turkish population define themselves as conservative, with only around 30% defining themselves as social democratic.

The key impediment to the development of social democracy in Turkey is the estrangement between the Left and the popular masses. The working classes have been abandoned and looked down upon by the Left, and have turned instead to the Right. The Right have mobilised the popular masses to great electoral success. In the last elections, Mr Karaveli noted, around 70-80% of labourers voted for the right-wing ruling Justice and Development Party (AKP). This cause and effect is being mirrored in Europe and the US.

While the estrangement has several causes, Mr Karaveli explained, at the heart of the issue is the Left’s condescension toward the masses. Akin to Hillary Clinton’s ‘basket of deplorables’, and Francois Holland’s ‘toothless’ comments dismissing the working classes, the Turkish brand of liberal elite snobbery has been to brand the masses ‘reactionary’. Rather than fighting for workers’ rights, the Turkish Left have focused on trying to ‘enlighten’ the ‘backward’ masses. The Right has easily capitalised upon this, both in Turkey and the West, by claiming to defend popular culture against Leftists who look down upon the people.

A highly effective mix of neoliberal economic policies, social and religious conservativism and authoritarianism has proven extremely successful, according to Mr Karaveli. It has been refined for years by the Turkish Right, and is now proving equally successful in Europe. In this sense, Mr Karaveli argued, Turkey provides a warning example to Europe for what happens if the Left fails to connect with masses.

A key purpose of the book is to reinterpret Turkish history from a class perspective, to interrupt the common secularist/Islamist dichotomy which is most commonly used to explain authoritarian dynamics in Turkey.  Applying a Marxist reading to Turkish history reveals that secularism and Islamism are actually two sides of the same right-wing coin. The clashes in Turkish society are not identitarian, but class-based. The army have not intervened to protect secularism, but to protect dominant class interests.

Mr Karaveli highlights certain continuities between Ataturk, the secularist founder of the Turkish Republic, and the current President Erdogan, leader of the Islamist AKP. Though Ataturk was a radical and Erdogan is a conservative – crucially, both represent bourgeois interests at the expense of workers’ rights. Mr Karaveli noted that while Ataturk oversaw the assassination of 15 Turkish Communist Party members in 1921, Erdogan presides over the country which is second only to China in terms of fatal workplace accidents, with 1,500 workers killed in their workplace this year.

The one exception in Turkey’s history, claims Mr Karaveli, was Bulent Ecevit, who served as Prime Minister four times between 1974 and 2002. Ecevit was early in diagnosing that the problem with democracy in Turkey was not – as the liberal elites maintained – the unenlightened masses, but the liberal elites themselves, who look down upon the masses as ‘reactionary’. Ecevit asserted that one could be religious without being reactionary, and won substantial conservative votes – proving that religious conservatives could vote for social democrats in Turkey.

Developments toward a social democracy were, however, conspired against by the business community, terror wrought by fascist death squads, and pressure from the US. For this reason, Turkey did not follow the paths of Greece, Spain, and Portugal, which transitioned from right-wing authoritarian dictatorships to democracies under the stewardship of socialist, social democratic and communist parties during the 1970s. Instead, Turkey followed the path of Chile, where the military instituted a neoliberal regime, seven years before the military did the same in Turkey in 1980.

As the Left in Turkey have alienated the working classes in their elevation of secularism, so the European Lefts have abandoned the working class for the defence of cultural minorities. The hope, both for Turkey and for Europe, is for a Left that brings together diverse struggles. Mr Karaveli made the case that in order for the Left to defend democracy against the Right, class issues must be fought alongside feminist, anti-racist and ecological struggles. Ended the talk on a warning note, Mr Karaveli asserted that if Europe cannot heed the lessons of Turkey in alienating the working classes, democracy in Europe too could soon be in peril.

The views of  speakers do not necessarily represent the views of the Centre for Turkey Studies.

CEFTUS briefing on Turkey and US sanctions on Iran