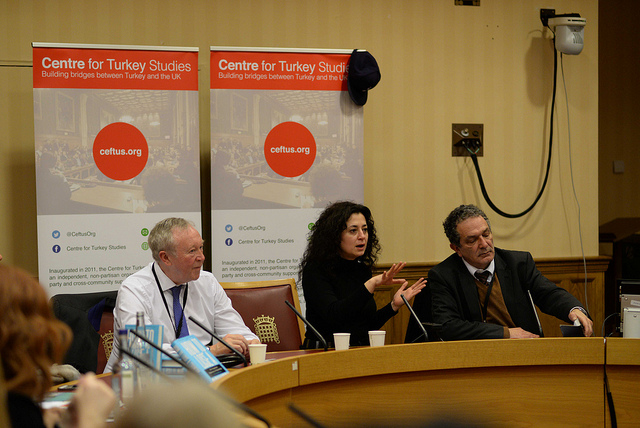 Book Launch: ”How to Lose a Country: The 7 Steps from Democracy to Dictatorship” with Ece Temelkuran

On February 12, the Centre for Turkey Studies hosted a public forum and book launch  in the House of Lords with acclaimed journalist and author Ece Temelkuran in conversation with Lord Maurice Glasman. The event was kindly hosted by Lord David Watts.

After introductions were made by Lord Watts, Ms Temelkuran began by explaining that the focus of her book, and its audience, is not Turkey. The book grounds an exploration of the global rise of right-wing populism in her own and her fellow citizens’ experience of the past two decades in Turkey. Employing the Turkish experience, Ms Temelkuran explained, she aims to alert others in Europe and the US to the warning signs of this phenomenon. While many in Turkey have found themselves exhausted by the emotional turmoil that results from this new political reality, Ms Temelkuran hopes to pre-empt this paralysing exhaustion in European and in the US. With collective, supranational strength and willpower, the rise of right-wing populism can be resisted.

We need to escape the cycle of reactionary opposition politics, argued Ms Temelkuran. In Turkey, she said, we have become lost in questions about the ruling Justice and Development Party (AKP) and their supporters, asking ‘how could they be so cruel?’ and ‘how can politics have degenerated into such absurdity?’ But this reactionism has not changed the facts, nor has it translated into a viable oppositional strategy.

Lord Glasman asked Ms Temelkuran to diagnose the failure of the Kemalist ruling class to engage with the Turkish poor and those in the provinces. Was it not this disconnect, he asked, that opened up the space for the success of the AKP? Ms Temelkuran responded by warning against the tendency of populism to reduce politics to miserable dichotomies: Kemalist/Muslim majority, Brexiteer/Remainer, Real People/the American establishment. These false binaries only serve to obscure the true dynamics of populism. We need to look beyond this to understand the true mechanism of right-wing populism.

Lord Glasman asked Ms Temelkuran to briefly outline the seven steps to dictatorship, as referenced in the book’s title. The first step, Ms Temelkuran explained, is ‘create a movement’. Movements, she explained, promise change at a time when people have lost faith in representative democracy after several decades of neo-liberalisation stripping social justice from the concept of democracy. Second, is ‘disrupt rationale and terrorise the language’. In this chapter, Ms Temelkuran tries to decipher the narrative of right-wing populists in order to dismantle the conversational rules we knowingly or unknowingly operate within. Third – remove shame from the public sphere. This, Ms Temelkuran points out, is connected with the concept of post-truth. It is the removal of shame that has paved the way for the rise of post-truth. Fourth, dismantle the judiciary and political mechanisms. This happened very quickly during the recent US government shutdown, Ms Temelkuran noted. Fifth, sees the design of citizens by the regime. Europe hasn’t quite reached this stage, she says, but in Turkey the regime is raising new generations according to the regime’s ideas of an ideal citizen. At the same time, they are imprisoning and pursuing those who refuse to conform. The sixth step is the degradation of political humour from a symbol and tool of resistance to a comfortable shelter for the opposition to hide within. Finally – build your own country. Once the opposition has been enfeebled and ideal citizens designed, the country belongs entirely to the regime and their followers.

After outlining these stages, Lord Glasman asked if Ms Temelkuran distinguished between left and right-wing populism, or if there was such thing as a ‘good’ populism. Ms Temelkuran responded that she wasn’t aware of any left-wing populist movements posing threats to democracy. There are many books written about what populism is and is it an ideology – but these books often speak to one another. Her aim, Ms Temelkuran explained, was to speak beyond the theoretical debates and try to find clarity about the threat right-wing populism poses to democracies around the world.

These issues have for too long remained confined to academic debates, argued Ms Temelkuran. The  aim of this book is to reach people outside of ivory towers and stimulate thought, debate and action about and toward tackling right-wing populism.  For many people, these issues are fundamental to where and how people will be able to lives their lives in the near future.

Lord Glasman responded by articulating the rationale behind his own belief in populism.  We are living in an interregnum, he claimed, where globalism, liberalism, and capitalism have been the dominant ideologies of the past 40 years. And capitalism, Lord Glasman explained, necessitates the belief that there is no home: that humans are rational, self-maximising individuals. The ‘we’ that Ms Temelkuran refers to in the book, Lord Glasman states, is a democratic concept; the idea that there is a collective that resists the pressures of capitalism. Then there’s liberalism – the idea that an individual is outside of all social relationships and is a chooser. The administrative state then also treats people as individuals. These all coalesce in globalisation, which itself dictates that there is no home. So, Lord Glasman concludes, the very idea of ‘home’ resists these ideologies.

Capitalism has left human beings without meaning, and that is part of what causes people to look to religion. But believing in humans is to believe that humans can create their own secular morality. But we have not yet been able to create this secular morality, which contributes toward the political and moral mess in which we find ourselves, argued Ms Temelkuran. The form of representative democracy ushered in by neoliberalism is one stripped of social justice, and the anger that has resulted from this has fed right-wing populism. However, Ms Temelkuran lamented, People could have been mobilised, energised and politicised by richer politics – rather than promises of nostalgic greatness.

Ece Temelkuran is one of Turkey’s best-known writers and political commentators. Having made her name as a columnist at national newspapers Milliyet and Haberturk, she is also the author of several award-winning works of fiction and non-fiction, including “Women Who Blow on Knots” and “Turkey: The Insane and the Melancholy”.