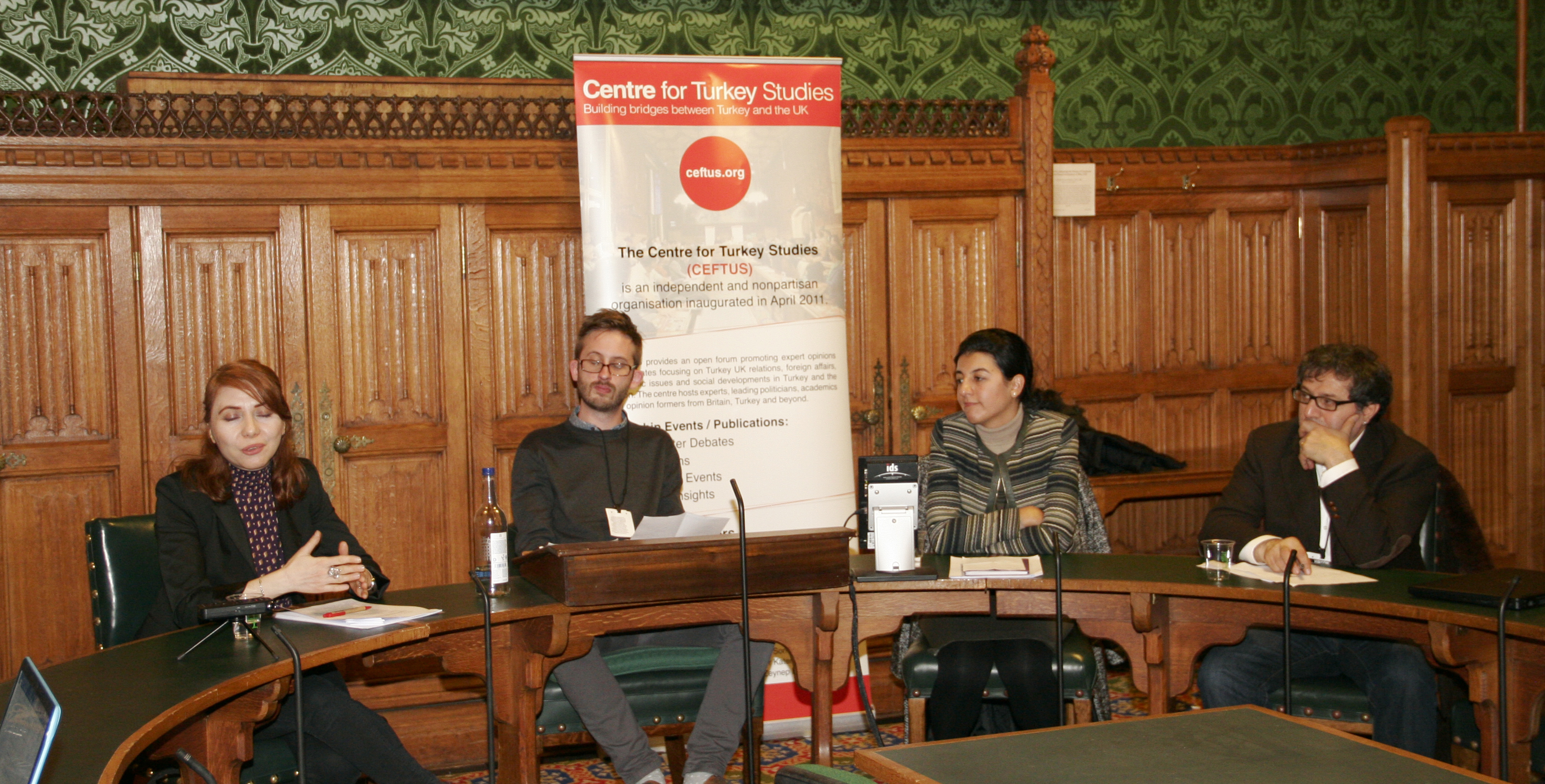 On January 24, the Centre for Turkey Studies hosted a public forum in the House of Commons with distinguished academics Dr Dogus Simsek of Koc University alongside Dr Janroj Yilmaz Keles and Dr Salma Soliman of Middlesex University.

Dr Keles began the joint presentation by noting that since the Syrian civil war began in 2011 over 6 million people have left Syria for neighbouring countries. A new type of refugee entrepreneurism – distinct from migrant entrepreneurism – is developing in these countries.

While refugees are often seen as a social and economic burden on the host country, there is an emerging school of thought that considers entrepreneurism as a means by which refugees can be integrated. Through entrepreneurism, refugees can take steps to overcome their vulnerable status and marginalisation within host countries.

Syrian refugees in Middle Eastern countries have often been treated as temporary guests rather than being recognised as refugees. Their legal status is subject to change with the whims of government and they suffer restrictions to welfare and the labour market. This, argued Dr Keles, has forced many into setting up their own businesses in refugee camps and in the cities of host countries and this has seen the emergence of new types of refugee entrepreneurs.

Migrant and refugee entrepreneurism are under researched topics, explained Dr Keles, particularly in the Middle East. The majority of existing studies are influenced by the tripartite theory of ‘mixed embeddedness’ for conducive conditions for the success of migrant entrepreneurism. Firstly, the refugee’s cultural capital – having the linguistic and social skills and networks they can capitalise upon for opening and managing a business. Secondly, a level of local demand in the host country for ethnically specific products. Thirdly, the legal framework of the host country permits migrants to open businesses. If these three conditions are met, migrants are expected to be able to open and sustain businesses.

This, however, is not sufficient to explain the conditions for refugee entrepreneurs as it does not focus on the different legal statuses, motivations for migrating and often traumatic experiences of refugees as opposed to migrants, argued Dr Keles.

In the latter half of the presentation, Dr Salma Soliman outlined their empirical research, which took place in Cairo and Alexandria in 2018.  There are some 120,000 Syrian refugees registered in Egypt, but with only one in every 20,000 registered, there is an estimated total of 500,000. Their research, explained Dr Soliman, assessed how Syrian refugees use their social capital and connections to address the challenges of doing business within a developing country. In the course of their research, they found that the shortcomings and inefficiencies – ‘institutional voids’ – implicit in developing countries in fact provided opportunities to refugee entrepreneurs, who could mobilise their social capital to operate within these voids.

Dr Soliman explained that the key factors influencing the successful entrepreneurism of Syrian refugees in Egypt. Firstly, all refugees are housed in major cities, rather than camps, meaning refugees can interact with their potential consumers and understand their market. Secondly, cultural and linguistic similarities aided market understanding. Finally, local support from both Egyptians and NGOs provide advice and skills training.

Dr Soliman and Dr Keles’ research found that though refuges have the right to work, high unemployment rates in Egypt force many into the informal labour market. This underperformance – ‘void’ – actually facilitated some refugees’ business success. Some professionals such as doctors and engineers are not licensed to operate in Egypt with their Syrian qualifications, but with a robust informal market, such professionals are still able to find customers. This, Dr Soliman proposed, challenges the implicit assumption that labour market voids are necessarily challenges, they can also provide opportunities for refugees with requisite skills and social capital.

Chair Niall Finn introduced the final speaker, Dr Dogus Simsek, who presented her paper on class-focused approach to refugee entrepreneurism in Turkey, based on field work carried out in 2016 in Istanbul, Ankara, and Gaziantep.

There are over 3.6 million registered Syrian refugees in Turkey, with an additional estimated 500,000 unregistered. Refugees have predominantly moved out of the 25 camps that were set up in the southeast, with only 6% remaining in camps. Syrian refugees can be found in almost every majopr Turkish city. Turkey’s initial open-door policy was not supplemented by a structured migration policy or provision of rights. Syrian refugees are not granted refugee status in Turkey, meaning they are not granted international protection and assured access to rights.

Following pressure from the EU, explained Dr Simsek, Turkey formalised the status of Syrian refugees with the promulgation of the Law on Foreigners and International Protection in 2013. Under the law, Syrians were given ID cards, and – on paper – access to the labour market and to welfare. They were not, however, granted housing so finding work has been crucial to Syrians needing to pay rent.

The vast majority have been forced to find employment in the informal sector, as in practice, Syrian refugees face serious obstacles to accessing the formal labour market. This, Dr Simek noted, is borne out by only 25,000 Syrians having work permits, of the approximately 1.5 million eligible to work. Barriers to access take the form of government policy: only one in every 10 employees in a company may be Syrian, and employer’s must shoulder the financial and administrative burden of the refugee’s work permit. Long-standing racial prejudices also affect access to the job market.

In the course of her research, Dr Simsek carried out 120 in depth interviews with Syrian refugees in Turkey from different class and ethnic backgrounds, asking them about their experiences of integration and their plans for the future. Dr Simsek found that less well-off refugees, who found themselves working in the informal economy were concerned about their precarious legal status – fearing their right to remain could be revoked with a change in government or its priorities. Often working very long hours for low wages, less well-off refugees reported not having exposure to native locals, in turn inhibiting their language skills and integration.

Meanwhile, wealthier and professional refugees reported much easier integration. They learn Turkish through business exposure or private Turkish classes, and avoid the issues of access to education faced by most refugees by sending their children to private schools. This inequality has only been exacerbated, Dr Simsek argued, by the selective citizenship policies of the Turkish government. The Turkish government has announced that Syrian refugees trained in certain professions, and those who invest in the country can obtain citizenship. Some have already been granted citizenship, though the exact figure is not public. This, in addition to the Syrians’ class-based experiences of integration and access to the labour market further differentiates Syrians from different class backgrounds. Dr Simsek’s unskilled and less wealthy interviewees reported wanting to return back to Syria or leave for Europe, while skilled professionals were largely planning to build a life and remain in Turkey.

Dr. Dogus Simsek currently teaches at the College of Social Sciences and Humanities at Koç University. She received her PhD in Sociology from City, University of London where she taught undergraduate sociology courses and MA in Cultural Studies from Goldsmiths College, University of London. Her research interests broadly cover integration and transnationalism, refugee studies, racism, ethnicity and identity. She has published various articles, research reports, op-eds and presented her researches at international and national conferences.

Dr Salma Soliman is a senior lecturer in International Management ar Middlesex University. She has work experience in the sectors of education, financial services and FMCG. Before joining academia, she worked as a management consultant on different projects in the UK and the Middle East for clients in the private and non-for-profit sectors.

Dr Janroj Keles is as an editor of the British Sociological Association’s journal Work, Employment and Society and a Senior Research Fellow at the Department of Law and Politics, School of Law, Middlesex University. He received his Ph.D. in Sociology and Communications from Brunel University. He has widely published on migration, globalisation, stateless diaspora, transnational political activism, media, ethnicity, nationalism and ethno-nationalist conflicts. He is the author of the book entitled, entitled Media, Diaspora and Conflict: Nationalism and Identity amongst Turkish and Kurdish Migrants in Europe.