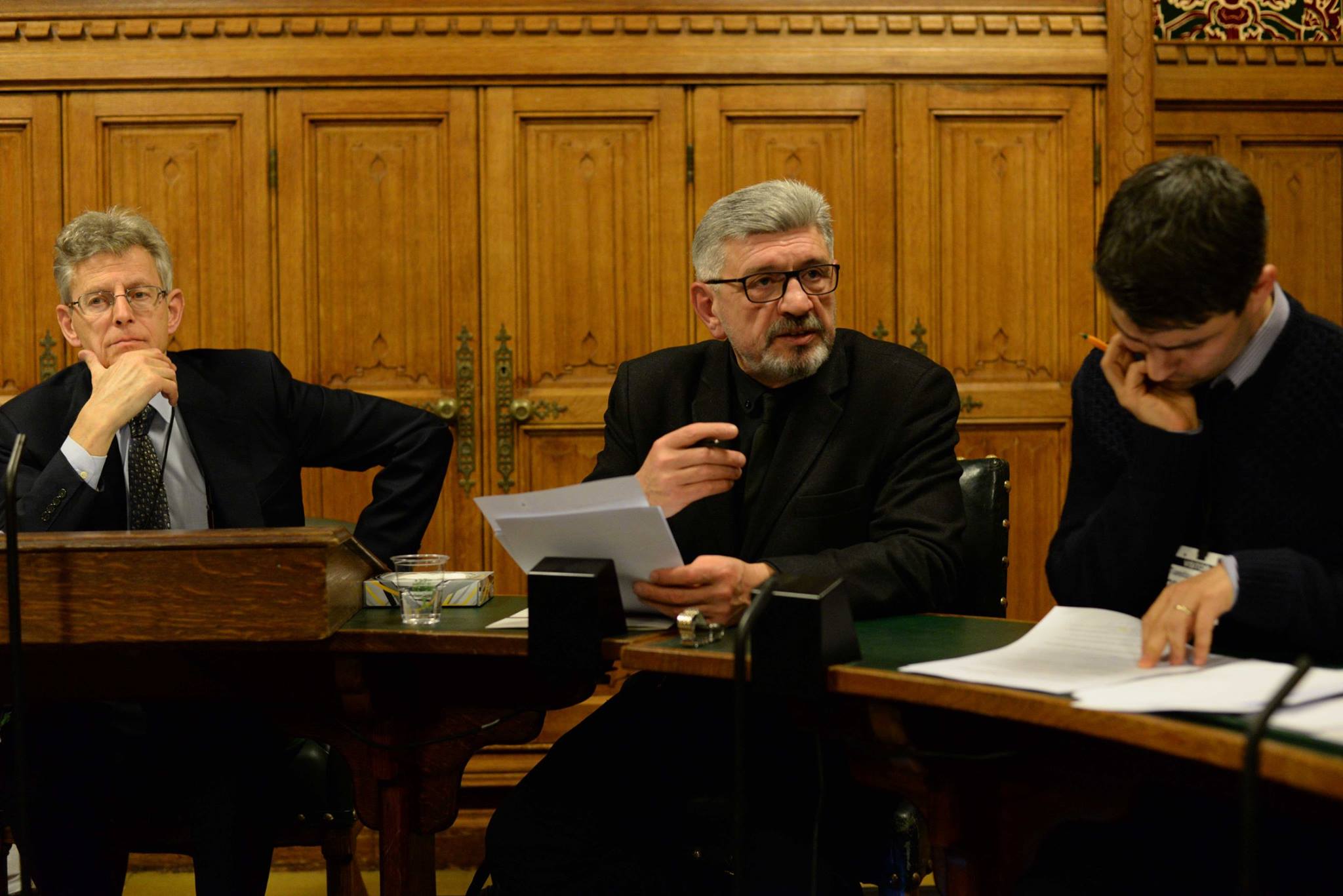 On January 29, the Centre for Turkey Studies hosted a public forum in the House of Commons with a leading member of Turkey’s Felicity Party, Dr Cihangir Islam. The event was kindly hosted by Sir David Amess, Conservative MP for Southend West, and chaired by Mr Gamon McLellan, Teaching Fellow at SOAS.

Sir David Amess MP opened the debate by noting the importance of Turkey’s stability and success to Britain. Crucial to this, he said, is a commitment to democratic values and the rule of law. He introduced Dr Cihangir Islam as a steadfast advocate of these values.

Chair Mr Gamon McLellan first gave some background on the Saadet (Felicity) Party, its history and its position within the Turkish political spectrum. Mr McLellan introduced Dr Cihangir Islam and outlined his academic and political background.

Dr Islam began by defining some key terms in his presentation: post-truth, post-reality, post-modernism, ethos, pathos and logos. He noted that his own critical analysis of the populist-authoritarian trend in Turkey is underpinned by Max Horkheimer’s Eclipse of Reason.

Populism, argued Dr Islam, is a political strategy which is used by leaders to create a collaboration between the corrupt elite and their foreign collaborators, to the detriment of the people. Populism has reached out to people who have been excluded by the established system, the integration of whom is necessary for the full functioning of the democratic system. However, they have been drawn in by populist movements for the benefit of elites, rather than the people themselves.

Dr Islam explained how populist movements have benefitted from the economic inequality resulting from globalisation and neoliberalism.  Contrary to Francis Fukuyama’s hailing of the ‘end of history’, representative democracy now finds itself facing the threat of populist democracy from the inside, rather than the external threat of communism.

Turning to the precipitating social-economic factors, Dr Islam critiqued the impact of globalisation. The unfair apportioning of economic resources and the widening wealth gap has led to an increased focus on national borders and in turn an excessive focus on the ‘national will’. As terrorism and security concerns overlay huge wealth disparity in developed economies, feelings of fear and instability dominate and have led to the decline of traditional ‘right’ and ‘left’ wing politics. This, noted Dr Islam, is a global problem, but also one that specifically affects Turkey. Over the past 17 years, since the accession of the ruling Justice and Development Party (AKP), the numbers of millionaires and of people living in poverty has simultaneously risen.

Considering next the status of middle-income groups, Dr Islam criticised the selfishness and ignorance of the petty bourgeoisie and white-collar workers. Under neoliberalism, new forms of brutal capitalism have emerged, and lower income workers have been subject to various rights abuses. Subcontractors, child labour, migrant abuse, lack of social security are widespread problems in Turkey and more broadly in the global neoliberal system. The rights of lower income workers have been relatively overlooked in Turkey, argued Dr Islam. 2013’s Gezi Park protests and organisation against the third airport focused rightly on environmental concerns, but workers rights are too often overlooked. The middle classes, Dr Islam opined, have been too willing to turn a blind eye to their struggles, and have concerned themselves too narrowly with their own protections and wellbeing.

The overlooked lower classes have been successfully targeted by charismatic populist-authoritarian leaders, explained Dr Islam, of which Presidents Trump and Erdogan are clear examples.   Dr Islam described their connection with voters with reference to an ‘L’ shape. The vertical column of the ‘L’ represents the populist party’s cultural connection with voters, which spans a range of socio-economic groups. The horizontal layer depicts the appeal to the lowest socio-economic group, based on populist economic policies. Such populist movements thus contain elements from both traditional political cleavages and identity politics. The column and row of the ‘L’ leaves a ‘black hole’, corresponding to the middle classes, isolated from this new politics.

Noting the importance of the international context to Turkey, Dr Islam pointed out that the atrocities of the Bosnian War are still fresh in the minds of Muslims, who fear Europe as hostile. Political instability and security concerns plaguing many countries of the Middle East compound feelings of insecurity which can dispose people toward populist rhetoric.

Dr Islam then turned to examine the past 17 years of AKP rule in Turkey. From 2002 until 2010 there was a concerted focus on democratisation, an acceleration toward implementing EU accession laws, and a focus on Kurdish and Alevi issues. Since 2010, however, there has been a slide toward nationalism and authoritarianism.

The AKP has made significant strides to end the period of military tutelage that has seen six military interventions between 27 May 1960 and 15 July 2016. However, the executive power now overrides judicial and legislative power. Dr Islam gave an outline of the constitutional changes that have paved the way to one-man rule, focusing in particular on Article 148 Section 3 of the constitution which allowed President Erdogan to make a series of sweeping changes which could not be constitutionally challenged under the State of Emergency declared five days after July’s attempted coup.

In the coup’s aftermath, noted Dr Islam, over 130,000 people have been banned from public service jobs, and 200,000 workers in the private sector have been sacked and permanently lost their jobs. 55,000 people have been jailed, which has led to more than 700 children growing up with their mothers in prison. 60 people have killed themselves in prison and 6,000 academics have lost their jobs. Further to this, noted Dr Islam, thousands of radio stations, channels, and organisations have been closed or trustees have been appointed to these institutions, with security concerns invariably used to justify the curtailing of human rights and democracy.

The politicisation of the judiciary and the degradation of parliament is seen in the thousands of cases opened against individuals for insulting the president, and the incarceration of more than 10 opposition members of parliament. The centralisation of power in the president is a key issue, particularly in light of the upcoming March 31 local elections. Dr Islam pointed out that financial assistance to municipalities is entirely under the control of the executive. Dr Islam detailed some abuses of procurement contracts and patronage that is taking place under the AKP; for example, one firm alone has been awarded 50 major tenders, equating to USD 50 billion.

Considering the growing polarisation in Turkish society, Dr Islam reflected upon the prevalence of insulting language in Turkish politics. The ‘Nation Alliance’ formed by the major opposition parties before the 24 June 2018 general election, for example, was described by the AKP as a ‘sick’ alliance.

Dr Islam described how the major parties split into two major blocs before the 2017 referendum on the executive presidency, and maintain this divide ahead of the 2018 general election. It is important to note, Dr Islam asserted, that the heterogeneous structure is resisting the pressure of the authoritarian system. Dr Islam explained that the partnership between the largest opposition party, the People’s Republican Party  and the Saadet Party has been a substantial source of morale for their respective bases and will continue into the future.

In conclusion, Dr Islam argued that the most effective measure against authoritarianism is the separation of power. The cohesive functioning of the legislative and judicial mechanisms, he asserted, are imperative to democratic health. Democracy must be founded upon elections, human rights, rule of law, transparency and accountability.  In the international arena, it is important to try to achieve a greater power balance between the five permanent members of the UN security council and other countries, for a fairer and more equitable global political and economic system. Within Turkey and internationally, nonviolent and democratic means must be employed to find common ground and achieve progress. The Nation Alliance, Dr Islam noted, is imperfect and incomplete, but is a substantial and ground-breaking achievement as a coming together of different political traditions.