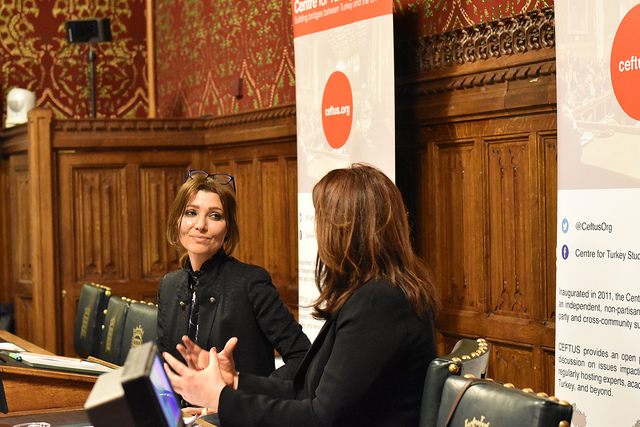 On March 26th, the Centre for Turkey Studies hosted Turkey’s most widely read female author, academic and rights campaigner Elif Shafak, in conversation with journalist and novelist Rachel Shabi. The event took place in Committee Room 12 of the House of Commons and was kindly hosted by Alex Sobel, Labour MP for Leeds North West.

Click here for photos, and here for a video recording of the event.

Shabi opened the discussion by asking Shafak how Turkey might constitute a case study for countries like the UK and the US, which are further behind in their own ethno-nationalist populist trajectories. Shafak looked back to the last period of optimism, after the fall of the Berlin Wall. Some two decades ago, she said, we predicted the downfall of fascism and socialism, and the triumph of liberal democracy. Optimism was so strong that even those countries lagging behind were expected to catch up by sheer momentum of progress being made in other parts of the world. This was especially true of attitudes toward the Middle East, where commentators praised the ‘Twitter revolution’ during the so-called Arab Spring, and posited that youths would henceforth topple dictators by firing Tweets rather than bullets.

Now, Shafak, argued, the pendulum has swung to the other extremity. Optimism has been superseded by anger, fear and resentment. We now, she continued, see a politics driven by negative emotions. Turkey is an important forewarning in this regard as it has shown that countries can slide backwards, away from liberal values and toward majoritarianism. The case of Turkey, Shafak explained, demonstrates that elections are not sufficient – rule of law, separation of powers, a free and diverse media, an independent academia and women’s and minority rights are vital to the functioning of democracy.

The accolade of authoring the ‘populist playbook’ has been attributed to both Turkish President Erdogan and Israeli Prime Minister Netanyahu, Shabi noted, and asked if Shafak thought they have indeed provided a manual for authoritarians to come?

As extremists embolden extremists, Shafak noted, dictators and autocrats are emboldened by the impunity with which others operate. We must be vocal in our criticism of autocracy and lack of democracy, implored Shafak, in countries such as Turkey, Poland, Hungary, Brazil, Venezuela, and the Philippines. However – she warned – it is important to be mindful of the distinction between the people and their governments. Too often they are conflated; a careful examination of civil society is crucial to understanding their complexity, and to not forgetting about liberal progressives who live under majoritarian rule.

Focusing upon the titular question of “who is ‘we the people’?”, Shabi asked what is being signalled by the frequent invocation of the ‘elites’ by right-wing populist leaders around the world.

Populism is a very weak ideology, answered Shafak. Like a bird with one wing, it needs something else to fly. This aid, she explained, often takes the form of nationalism. Similarities thread through otherwise differing strains of populism, notably a reliance on oppositional binaries, such as ‘the people’ versus ‘the elites’.  But, Shafak warns, we must scrutinise what is really meant by these terms. Populists frequently reveal the insincerity of their claim to represent ‘the people’, Shafak argued, by distinguishing between the ‘real people’ or the ‘decent people’ and others. It is an illusion that populism unites the people, it is always underpinned by a divisive dualism. What we actually see, Shafak argued, is not a confrontation of elitism, but a new elite replacing the old.

The Left also invokes ‘the elite’, noted Shabi. Can we use the word ‘elite’ responsibly, to talk about the holding of economic and political power by a few at the expense of the majority, she asked.

Shafak agreed that we must find a way to responsibly employ the term. Finally, she said, inequality is becoming central to political discussions. Rising inequality is not only a political and economic issue but a moral one, Shafak argued. But we must be vigilant to the current, often sinister use of the term ‘elite’, which is often used to delegitimise those holding liberal democratic values, rather than to hold to account those who constitute the 1%.

Looking back to the anti-capitalist protests of the late 1990s, Shabi noted, which originated in the Global South, many were characterised by the international media as being anti-globalisation. The movements largely rejecting this rendering, as they took issue with the inequalities driven largely by the international neoliberal order, rather than with globalisation. Is it a mistake of the Left, asked Shabi, that we have allowed the values of liberal democracy to be too bound up with neoliberalism?

Certainly, Shafak responded, too many concepts have been bundled into the term ‘liberalism’. These must all be unpicked and individually understood in order to understand the damage neoliberalism has caused to liberal democracy. Looking at tech companies in Silicon Valley, who position themselves at the forefront of a ‘liberal’ capitalism, the rhetoric is not matched by practice. Tech companies profess to promote diversity and egalitarianism but fail entirely to employ minority ethnic or LGBT workers in representative proportions. We must be critical of the inequalities caused by neoliberalism, she argued.

Observing that the criticism of cosmopolitanism by populists is often employed to evoke a disloyalty to nationalism, Shabi asked Shafak her opinion on the duality of ‘People from Somewhere’ versus ‘People from Anywhere’.

Shafak explained she has been accused of being ‘rootless’ and faced a backlash in Turkey when she began writing in English. People said I was abandoning my mother tongue, she recalled, nationalist populism drives people to ask which monolithic, timeless, mutually exclusive identities you belong to. It is for this reason Shafak is critical of identity politics, informed largely by her exposure to the African American women’s movement in the US. The women of that movement emphasise  a multiplicity of identities and oppressions, Shafak explained, and that has been lost in the wider feminist movement.

Shafak described her own feeling of multiple belongings: an Istanbullite but European by birth and by choice, now a Londoner.  If we can have multiple belongings, she posited, there is a greater chance that some of our belongings will overlap and enable us to find common ground.

What is it about that kind of multiplicity that so threatens this latest incarnation of populism, asked Shabi.

It has been portrayed as something scary and too complex, Shafak explained. We must instead view it positively. Contributing to this issue is the constant bombardment of information and misinformation we are subjected to, Shafak argued. Drawing a distinction between information and knowledge is imperative for understanding how the former can obstruct the latter. Wisdom, meanwhile, necessarily has an emotional component. Shafak decried the success with which those she called populist demagogues have employed emotion to connect with people, and the Left’s almost complete failure to do so at present.

Shabi asked Shafak to expand upon a statement she has made, that as a writer she is close enough to society to be attached but distant enough to be critical. It’s the right place but it’s a lonely place.

Shafak explained that while she felt it was the right place for a writer, it is also a lonely place. From an early age she felt on the edge of society for a variety of reasons, not least because of her international upbringing and education. While in Turkey, she received a nationalist education and abroad a starkly contrasting, internationalist education. This, Shafak reflected, afforded her some cognitive distance from society, which has allowed her to be critical while remaining attached.

Likewise, writing in English has permitted Shafak to take some distance from Turkey. When dealing with certain subjects, Shafak explained she is able to be more bold. Humour, irony and satire come much easier in English, while she is able to express sorrow, longing and melancholy more richly in Turkish.

The conversation turned to public space, where Shafak highlighted the importance of diversity and inclusivity. In the Middle East in particular, men are often dominant in public spaces, and the important conversations women are having about topics such as faith, identity, and sexuality are confined to the private sphere.

We are only just coming to understand the dark side of public space, explained Shafak. We need to be alert to how digital public space can be manipulated and proactive about ensuring it is a diverse space, she argued.

Finally, Shabi asked Shafak to expand upon her statement that although economic inequalities have fuelled some of the resentment and negative politics we see playing out today, emotions too have a significant role to play.

Shafak explained, drawing upon electoral case studies from Germany and polling data in the US, that anxiety drives voters toward right-wing populism. In this age of anxiety, we have to talk openly and bravely about immigration anxiety, economic anxiety, racial anxiety; failure to do so will only continue to drive people toward right-wing extremism where they feel they can freely voice their fears. Political science can fetishise data and underrate that which cannot be so easily quantified, like emotions and cultural attitudes, which underpin many of today’s conflicts. Writers, Shafak explained, therefore have a vital role to play in helping us to tease out the roles culture and emotions are playing in today’s political landscape.