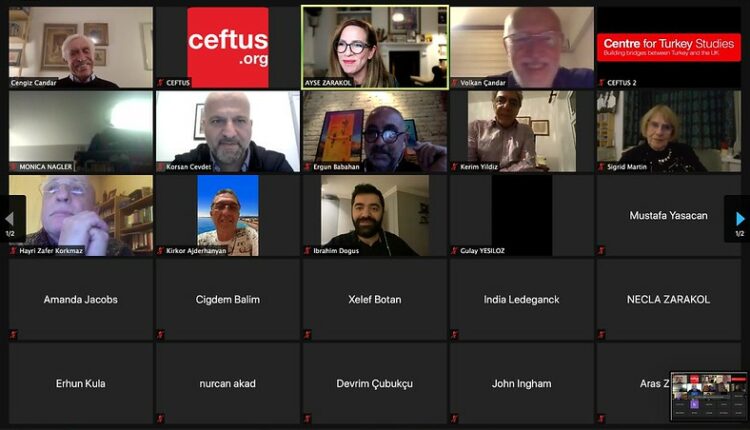 Biden’s US and Erdogan’s Turkey

On November 26, the Centre for Turkey Studies hosted the renowned Turkish journalist Cengiz Çandar. The online talk ‘Biden’s USA and Erdoğan’s Turkey’ was chaired by Dr Ayşe Zarakol of Cambridge University. Mr Çandar discussed the recent developments in Turkey in light of the US elections and the victory of President-Elect Joe Biden.

Mr Çandar opened the discussion by highlighting the significance of the title of the event. America matters not only for Turkey but to the whole world and the lifespan of Turkish governments could be influenced by who is in the White House. He then proceeded to answer the question: what might we expect in the relationship between Turkey and the US in the next four years?

Mr Çandar referred to Mr Biden’s December 2019 interview with the editors of the New York Times, which was subsequently published by the newspaper in January 2020. Initially, the interview did not receive much coverage in Turkey, but when a part of it resurfaced on Youtube on August 16, 2020, it generated an uproar.

In that interview, Mr Biden described Turkish President Erdoğan as an ‘autocrat’. He said that the ‘US needed to take a different approach to him’ by supporting the opposition in Turkey to encourage and defeat President Erdoğan in an election. The US should get together with its allies in the Middle East to isolate Erdoğan’s Turkey.

President Erdoğan’s Spokesman İbrahim Kalın described these comments as reflective of ‘pure ignorance and hypocrisy’ and saw them as an example of ‘ordering Turkey what to do’. Mr Çandar remarked whether Mr Kalın would have made the same comment had he known at the time that Joe Biden would win the presidential election. However, signs of efforts by Turkish leadership to reset the Turkish-US relations began to appear once it became clear that Biden has won.

These actions by Turkish leadership show that the relationship between the US and Turkey is, in essence, problematic and that these problems will get worse. Mr Çandar stressed that usually what the presidential candidates promise during the election campaigns and what they do once they are in office differs. At the end of the day, Turkey and the US are NATO allies, and each need the other, but he argued that this time things might be different.

Mr Çandar highlighted Mr Biden’s ‘America is back’ promise and referred to an interview that Walter Russell Mead – the Yale University academic and Wall Street Journal columnist – did in July 2020 with Anthony Blinken, who will become the next Secretary of State.

Mr Çandar drew attention to the content of the interview and mentioned how Blinken referred to the world losing its ‘North Star’, which left many around the world confused and feeling a sense of chaos. In contrast with President Trump, who courted and flirted with autocrats, the Biden presidency would try to restore American leadership globally through strengthening collaboration with mainly European allies, restoring institutions and putting democracy at the heart of American policy.

Mr Çandar said that domestically, the Biden administration would be anti-racist and people from diverse backgrounds will be in the cabinet, which will be reflected in the foreign policy attitudes. This new administration in the US would not support populist autocrats around the world.

Then Mr Çandar turned his attention on Erdoğan’s Turkey and highlighted how Turkey has been ‘sinking’ and how the regime became more autocratic in the past four years. He argued that President Erdoğan is held hostage by his principal ally, Mr Devlet Bahçeli of the Nationalist Action Party. Organised crime and mafia figures are venerated by the government, while the founders of the governing party are sacrificed. He drew attention to Turkey’s economic difficulties and said that the foreign currency reserves at the central bank are depleted, and the fight against the pandemic is lost.

In foreign policy, however, Mr Çandar said that Turkey has become more assertive and has become one of the three major revisionist powers in the world. He highlighted that Turkey is active in the Middle East, North Africa, the Caucasus, and East of Africa and increased its presence in the Eastern Mediterranean. Turkey’s international assertiveness would be a severe bone of contention between the Turkish leadership and the new US administration.

Dr Zarakol posed a question on the theme of whether the Biden administration can repair US-Turkish relations. Some of the people named in the foreign policy team were previously part of Obama administrations and these people were around when the relations were very close in 2013 and when they started to sour later. She asked: How well do they know Turkey and what kind of clues do their decisions in the Obama administrations give about what to expect in the next four years?

Mr Çandar emphasised that the new foreign policy and national security appointments are a team who, despite being relatively young, held several positions in previous administrations. They had engaged Turkey on many occasions in the past and know Turkey and the Turkish government officials very well.

The reasons behind the souring of the relations were mainly down to the US support for Syrian Kurds. Mr Çandar expects the new administration to continue supporting the Kurdish YPG and PYD in Syria. The Biden team are exhausted by Mr Erdoğan and his entourage, and they don’t have much enthusiasm for him.

Mr Çandar claimed that Turkey’s geopolitical position is not as important as some people think and especially now because the US priorities are shifting away from the Middle East. Several factors will define Biden administration’s Turkey policy, but the most important one will be whether Turkey will withdraw from the S400 deal with Russia or not. This decision will not be an easy one for Turkey because if it moves back to please the US then Turkey’s relations with Russia will suffer.

Dr Zarakol commented on the evolution of the US-Turkish relations in the past four years and highlighted how ‘things didn’t go as badly as feared’. She questioned about the thinking on the Turkish part and asked: did Turkey put all eggs in the basket that Trump will get the second term, or did they leave any room to manoeuvre?

Mr Çandar highlighted that Erdoğan is a very pragmatic politician and will do everything to survive. However, now he is a hostage to his nationalist ally and that restricts Mr Erdoğan’s manoeuvrability. He remarked that Erdoğan’s political lifespan might not be as long as many people expect. Mr Çandar referred to two reports in the US press, which focus on the pressure President Erdoğan had put on Biden when he was the Vice President in the case of the state-owned Halkbank. These articles offer clues about the stance of the Biden administration on several issues that complicate the US-Turkish relations.

Dr Zarakol asked whether the rumours that imprisoned opposition figures, such as Osman Kavala and Selahattin Demirtaş, may be released will come true.

Mr Çandar mentioned that Turkey was searching for a reset in its relations with the US and one of the moves the government was hinting at is legal reforms. Erdoğan also mentioned reforms a few times and several senior AKP figures citing the need for reforms, however, added to the widespread optimism that Mr Erdoğan is taking precautions to relieve the pressure building on him after Biden’s election. But then, he noted, Bahçeli stepped in and criticized the calls for reforms which ended the talk of reforms. He said that he was not very optimistic that Kavala and Demirtaş will be freed soon.

In the last 30 minutes of the talk, the audience asked questions on several issues Mr Çandar’s discussion raised.

Ayşe Zarakol is Reader in International Relations at the University of Cambridge and a fellow at Emmanuel College. She is the author of After Defeat: How the East Learned to Live with the West (Cambridge University Press, 2011), which was selected by the Russian newspaper Republic as one of the books one must read in order to understand the twenty-first century. Her most recent book is Hierarchies in World Politics (Cambridge University Press in 2017). Zarakol is an active member of the PONARS Eurasia international academic network which advances new policy approaches to research and security in Eurasia. Zarakol has held visiting fellowships with the Council of Foreign Relations, the Norwegian Nobel Institute and the University of Copenhagen. She occasionally blogs on Turkish politics for the LRB website.