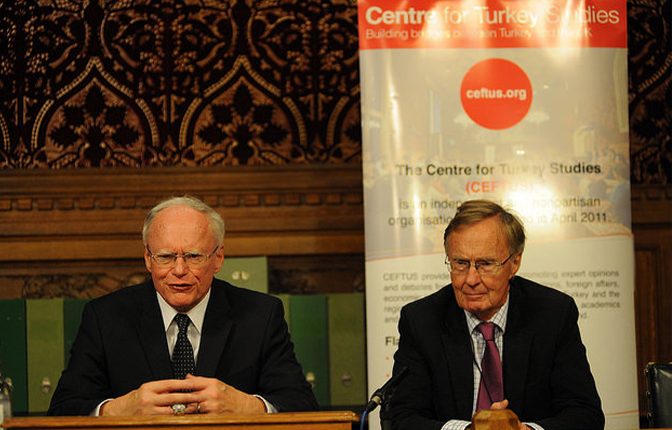 Turkey, US and what’s next for Syria

CEFTUS Online Talk ‘Turkey, US And What’s Next For Syria’ With James Jeffrey and Sir David Logan

During much of the past four years, the US-Turkey relations were tense due to several policy disagreements. While the Trump administration managed the tensions to keep the relationship afloat, disagreements, especially on Turkey’s relations with Russia, are expected to resurface under the Biden administration.

Mr Jeffrey began his talk by highlighting that ‘What will the West do with Turkey?’ is the bigger question. Referring to the speech Secretary of State Mike Pompeo delivered at the NATO summit, which focused mainly on the differences between Turkey and its Western allies, Jeffrey stressed America’s unhappiness with Turkey because of Turkey’s purchase of the S400 missiles from Russia. Turkish action in East Mediterranean was another source of tension. Turkey’s recent behaviour raises the question: ‘Where is Turkey going, and how should we deal with it?’

Jeffrey listed Biden administration’s top five foreign policy priorities: China, Russia, North Korea, Iran and climate. He said Turkey was number six, but it impacts two of the top five priorities: Russia and Iran. The US-Turkey relations in recent years have been affected by pent-up feelings from both sides and the unique and strong character of President Erdogan. Jeffrey said Erdogan is extremely engaged and tries to do the best for his country.

Initially, Turkey tried its best to keep away from foreign entanglements, but after the Second World War, this policy was no longer possible because of pressure from the Soviet Union. Turkey became an anchor point or a lynchpin in the US/Western strategy to contain the Soviet Union, and geographically it was vital for the US.

Jeffrey drew attention to Turkey being a problematic partner and compared it to France, which is another country that is problematic for the US. Beyond the US, there are only a few countries that are quasi-independent. The UK is closely tied to the US. Germany and Japan are also closely aligned with the US. France and Turkey are the only other countries in the Western alliance that have an independent foreign policy. France has a foreign policy beyond the EU in its areas of influence. Turkey does not have a global reach but has a powerful role in its ‘near-abroad’. It is the 17th largest economy and has a population that is mainly European in orientation. Turks, including those that are religious, see their future in Europe. Turkey’s near-abroad is a very problematic one, which it inherited from the Ottoman Empire: Cyprus, Armenia, the Kurdish Question.

In the 19th century, Turkey was a great power, and like other great powers, it collapsed and was left economically devastated. Turkey sees the world in this win-lose realpolitik ways. Jeffrey mentioned Turks’ suspicion of great powers and how they interpret the US concerns about Cyprus, Greece and Armenia as an interference in their internal affairs. After the Cold-War, much of American and Western attention focused on Turkey’s near-abroad: the Balkans, the Caucasus, and the Middle East. Turkey has a strategic interest and long presence in these areas, and Turkey has been very helpful in most cases to its NATO allies. No country other than the UK has been central to US policy in the Near East.

Following this reflection, Jeffrey asked: ‘what brought us where we are?’ He remarked that Erdogan came to power with a pro-Western attitude. He tried to support the US in the Iraq war, but could not succeed, and tried to solve the frozen conflicts, such as the Cyprus conflict.

The European Union (EU) made Cyprus a member, which imported the conflict with Turkey into the EU. Erdogan was pushing for establishing diplomatic relations with Armenia. He resolved Turkey’s problems with Syria and developed a good relationship with Assad; he was brokering between Israel and Syria. Turkey was trying to build peace abroad and trade links with its neighbours. Erdogan attempted to integrate the Kurdish population in a better way. Obama chose Turkey for his first state visit and identified Turkey as a model for the future Middle East.

In Syria, the US supported the PKK’s offshoot, which was renamed as the SDF. At the time there was a ceasefire with the PKK, and that collapsed in 2015. Turkey understood what America was trying to do and begun to suspect US intentions.

Jeffrey commented on Turkey’s relations with Russia and said that Turkey had to deal with Russia as it is a neighbour. It depended on Russian gas and Russia was building Turkey’s first nuclear power plant. The most important aspect of the relationship was Turkey’s purchase of the S400 missiles, and the US felt that this was a problem because it can encourage other US allies, such as Saudi Arabia and India, to do the same. Turkey was a partner in the F35 fighter jets, and the S400 missiles pose a significant risk for the F35 project. As a result, the US pulled Turkey out of the project. Then came the CAATSA sanctions that 99 senators voted. President Trump has excellent relations with Erdogan, and he managed to keep the relations going. The Turkish government has another grievance against the US, and that is the refuge the US offer to Fethullah Gulen, who is responsible for the 2016 coup. Hence, friction points are huge.

There has been a shift in the perception of Turkey in the US. Turkish human rights record has never been perfect, but the US usually overlooked it. The Armenian and Greek lobbies have been anti-Turkey and the Jewish lobby pro-Turkey until Turkey’s relations with Israel began to deteriorate. The US military started to change its support for Turkey after the 2003 debacle. The neo-cons were suspicious of Erdogan because of his Islamist leanings. There is very little sympathy for Turkey.

Jeffrey said he believed the wheels in the Trump-Erdogan relation were coming off. In the region, Egypt, United Arab Emirates, Saudi Arabia, some in Israel and France say that Turkey is using Islam to infiltrate into the countries in the region and to increase its influence. The major problem for Europeans has been about Turkey’s human rights record. The EU feels Erdogan is blackmailing it. In the dispute in the East Mediterranean, Europe finds itself in loggerheads with Turkey. These problems are exacerbated by Erdogan, who is a very determined and dynamic leader. However, when the other side shows real muscle, Erdogan changes his position and accepts the compromise. He brings a certain flair to foreign policy making that makes the negotiations difficult. We have to be careful about which sins we will excuse and which ones we won’t. It won’t be easy to have long-term relations with Turkey if Turkey continues on this course.

Jeffrey said sooner or later Trump or Biden administrations will sanction Turkey. Many opportunities were offered, but Turkey has not done anything about them and went forward with the acquisition of S400 missiles. However, it is going to be challenging to maintain a collective security arrangement in the Middle East without Turkey.

The event continued with questions from the participants. Jeffrey commented on several topics, including President-elect Biden’s policy on Iran, the long-term consequences of Turkey’s purchase of S400 missiles, American aims in Syria, the relations between Egypt, Israel and Turkey, and whether Turkey can leave the NATO and what would be the consequences.

Ambassador James Jeffrey retired from the Foreign Service with the rank of Career Ambassador in June 2012.  He was recalled to active duty at the Department of State by Secretary Pompeo in August 2018 to serve as the Secretary’s Special Representative for Syria.  In January 2019, Jeffrey was selected by the Secretary to simultaneously serve as the Special Envoy for the Global Coalition to Defeat ISIS.   Jeffrey was also named Chief of Mission for Syria in 2020.   He retired again from the Foreign Service in November 2020.

During the period 2012-2018, Jeffrey was the Philip Solondz Distinguished Visiting Fellow at The Washington Institute for Near East Policy, a Visiting Instructor at George Washington University, an energy consultant for APCO, member of the SoSi Advisory Council, and member of the Secretary of Defense’s Defense Policy Board 2012-1017 and CIA External Advisory Board 2017-2018.

Before his first retirement in 2012, Ambassador Jeffrey held a series of senior posts in Washington, D.C., and abroad. His last assignment in the Service was Ambassador to Iraq, 2010-2012, where he led a mission by 2012 of 16,000 personnel and an annual budget of $6 billion.

Prior to his service as Ambassador to Iraq, he served as Ambassador to Turkey  2008-2010.  Previously, he served as Assistant to the President and Deputy National Security Advisor in the George W, Bush Administration. From 2006-2007 he served as Principal Deputy Assistant Secretary for the Bureau of Near Eastern Affairs at the Department of State, where his responsibilities included supervising the Bureau’s programs of several hundred million dollars in democracy promotion, peacekeeping, government capacity building, Track II reconciliation, and other assistance funding.   Earlier appointments included service as Senior Advisor on Iraq to the Secretary of State; Chargé d’affaires and Deputy Chief of Mission in Baghdad, where he was responsible in 2004 for oversight of the U.S. Government’s $22 billion program for rebuilding Iraq; Deputy Chief of Mission in Ankara and Kuwait; Ambassador to Albania, and Deputy Coordinator for Bosnia.

Jeffrey is a member of the Council of Foreign Relations, American Council on Germany, and the American Academy of Diplomacy.

A former infantry officer in the U.S. Army, Ambassador Jeffrey served in Germany and Vietnam from 1969 to 1976.  His wife Gudrun and he have two children, Julia, and Jahn.

Sir David Logan was British Ambassador to Turkey from 1997-2001 and also served at the British Embassy there between 1965-1969.

For most of his career, he specialised in east-west relations and in defence policy.

He served as Deputy Chief of Mission at the Embassies in Moscow and Washington.

In London, his appointments included Assistant Under Secretary of State for Central and Eastern European Affairs, and subsequently for Defence Policy.

Since retirement from the FCO, he has been Director of the Centre for Studies in Security and Diplomacy at Birmingham University, a Senior Fellow of the Institute for Strategic Dialogue, and Chair of the British Institute at Ankara.

He has also been director of British, Russian and Turkish companies.

He lectures on defence policy at Birmingham University, where he holds an Honorary Doctorate.

Moment of rupture in Turkey-EU relations: from post-candidacy to open clash