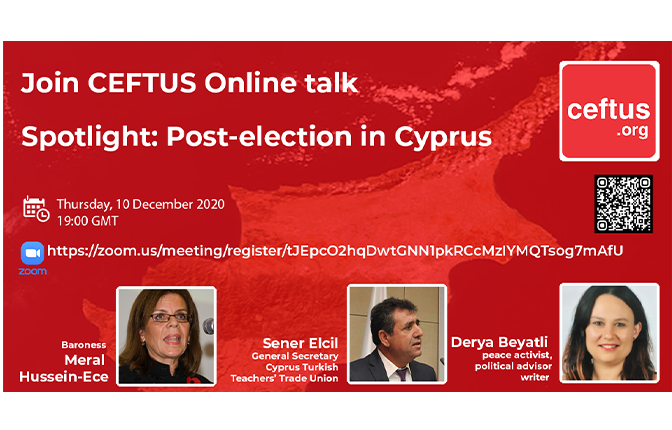 The post-election context in Northern Cyprus was discussed in this talk, which was chaired by Baroness Meral Hussein-Ece. Turkish government openly supported the conservative candidate and the former Prime Minister Ersin Tatar, which tipped the contest in Tatar’s favour in the second round. Baroness Hussein-Ece argued that Tatar’s election has further pushed away Cyprus from the possibility of reunification. However, the debate on what comes next in Cyprus and the international effort to unify the island under one state will continue. The election results also show that Northern Cyprus is very much divided when it comes to the future of the island.

Derya Beyatlı was the first speaker. Beyatlı is a peace activist, and she began her talk with an account of the developments that started just before the elections. The elections were neither fair nor democratic due to Turkish interventions. There is a history of Turkish interventions in Cypriot elections, but the level of the intervention this time was much higher than in any previous occasions.

The opposition candidate, Mustafa Akıncı, complained about the threats he and his family have been receiving from the Turkish embassy. Tatar’s UBP (National Unity Party) was given tactical advice on its election campaign, and many people came from Turkey for campaigning. There was talk of bribes and the water pipe carrying water from Turkey was damaged for much of the past year, but it got fixed just before the election. Turkey wanted to have an official opening of the water pipe, but the law prohibited holding the ceremony in Cyprus. Instead, Tatar went to Turkey for the ceremony. During the ceremony, Erdogan announced that the ghost town of Varosha would be partly opened. All this happened without the involvement of Turkish Cypriots. In the first round, the elections were very close, but during the week before the second round, many MPs from the AKP and the MHP visited the island to help with Tatar’s election campaign.

Twenty thousand more voters voted in the second round of the election compared to the first round, which is a very high number given the total votes Mr Tatar received was around 65,000. During his victory speech, Mr Tatar thanked President Erdogan and said that he could not have won the election without Erdogan’s support.

Beyatlı said that she does not think Turkish Cypriots are divided about the future of Cyprus. Most support a federal and united Cyprus. Recent opinion polls conducted on both sides of the island show there is support for a federal solution – one scenario in which both Turkish and Greek Cypriots would vote ‘Yes’.

After the election and the Varosha visit, there was a reaction from the United Nations and the European Union (EU). On 26 November 2020, the European Parliament issued a resolution acknowledging what happened in Cyprus and urging Turkey to reverse its decisions. It also urged the European Council to maintain its position and ask Turkey to stop its illegal actions.

The second speaker was Şener Elçil, who started his talk by expressing his pleasure for being part of the discussion and for having a platform for raising the real voice of Turkish Cypriots. He referred to the Turkish project of dividing the island and said that we have been living in extra-ordinary times. There were three guarantors in Cyprus, and according to the 1960 agreement, all three guarantors should guarantee the unity of the island. They are guarantors in name but did not act as such. The British created the initial tensions between the two communities during the1950s. Greece carried out a fascist coup and wanted to take over Cyprus and Turkey conducted a military occupation of it. Elçil asked: ‘Why is Turkey continuously transferring population from mainland Turkey to Cyprus?’ He mentioned that there had been many censuses since 1974, but no one knows the exact number of Turkish Cypriot population.

Elçil claimed that Mr Tatar was acting like a civil servant of Turkey and a spokesman of President Erdogan. Cyprus had a two-state, but no one recognises TRNC, and that situation has not led to anywhere. Therefore, the unification of the island was in the interest of every Cypriot. Elçil said: ‘Cyprus is too little to divide and too big to share’.

Elçil referred to the deterioration of Turkey’s democracy and drew attention to Turkey’s bad relations with all her neighbours. The Turkish economy was collapsing because of the AKP’s bad governance and to distract the population from that Turkey was creating problems for all its neighbours.

Fabian Hamilton MP (Labour) made a short comment. He mentioned that the Labour party agrees with the comment that there should not be guarantors in Cyprus and argued for the need to work towards demilitarisation of the island. He stated his support for a bi-communal and bi-zonal federal solution in Cyprus.

The talk continued with comments and questions from the participants.

Şener Elçil was born in Kalavasos, Larnaca in 1963. He had to migrate with his family twice due to the societal incidents and conflicts in Cyprus in 1960s and 1970s.

After completing his high school education in Famagusta, he graduated from Teacher Training College in 1984 and worked in various schools as a primary school teacher. In 1986, Elcil has started to take an active role as a unionist and he is continuing his career as General Secretary of Cyprus Turkish Teachers’ Trade Union (KTÖS) since 2001.

Şener Elcil as General Secretary of KTOS puts in significant effort for re-unification of Cyprus against the ongoing invasion and division of Cyprus since 1974; demilitarizing and disarmament of the island and; contributing to the struggle of Cypriots demanding respect to their political will and the human rights.

Elcil also endeavours to promote free, quality and democratic education for all in the society. Besides, he’s taken part in the Establishment Committees of Home for Cooperation, Queer Cyprus Association, Trade Union’s Platform (Sendikal Platform), Bi-communal Teachers Platform and many others in Cyprus.

Derya Beyatlı is a peace activist, political advisor and a writer born and raised in Cyprus.

She lived and worked in the United Kingdom, Belgium, Turkey, and France which helped her go beyond the traditional nationalistic narratives and look at the Cypriot society from a different perspective, a multicultural one.

As a firm believer in equal rights and freedoms for all and unity in diversity, she took an active part in many different civil society organisations and has been working together with all communities of Cyprus, towards creating an inclusive, multicultural, democratic and equitable society for all.

Ms. Beyatli is an international consultant managing social and economic development projects and a writer with a number of publications on the rapprochement of communities of Cyprus and the European Union.

She is a founding board member of Cyprus EU Association and the Third Community Forum working towards the establishment of an EU-member Federal Cyprus.

Baroness Meral Hussein-Ece was born in London to Turkish-Cypriot parents, she was elected to Hackney Council as a Labour Party councillor for the Clissold ward in 1994 and became deputy leader in 1995 and 1996. She was the first woman from a Turkish/Cypriot background elected to public office in the UK. She then joined the Liberal Democrats and she was re-elected to Hackney Borough Council in Dalston ward in 1998.

Baroness Hussein-Ece was awarded the OBE in the Queens New Year Honours 2009, for services to local government and was then appointed as a peer in the House of Lords in May 2010.

She was instrumental in setting up the first Turkish Women’s Group and has worked closely with the Centre for Turkey Studies since its founding in 2011.