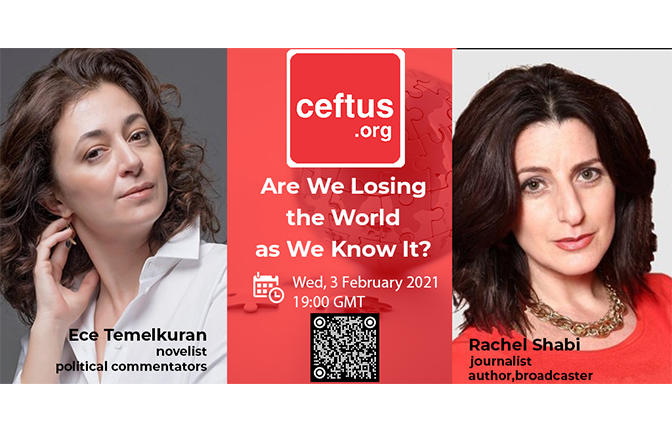 Join us for the online talk with Ece Temelkuran and Rachel Shabi “Are we losing the world as we know it?”

Journalist, author and broadcaster Rachel Shabi introduced the talk and the speaker, Ece Temelkuran, who is a prominent Turkish journalist and author of How to Lose a Country: The 7 Steps from Democracy to Dictatorship.

Ece Temelkuran started by responding ‘yes’ to the question ‘Are we losing the world as we know it?’ She said a new form of fascism is on the rise across the world, which is one reason why we are losing the world as we know it. In her book, she lays out the global patterns of the rise of fascism, authoritarianism, and right-wing populism. Despite the differences between countries experiencing this phenomenon, all these countries experienced fascism, authoritarianism, and right-wing populism in the same way. That is why she came up with the seven patterns of the new form of fascism, and her motivation in writing the book was to alert the world about it. She then listed the seven steps from democracy to dictatorship.

The first stage is the creation of a political movement. The word movement promises action, renewal and change, and it is potentially inclusive of many people. When the right-wing populist leaders emerge in the political field, they split the people into two: the real people and the oppressive, corrupt elite. When you call yourself the ‘real people’, you declare the rest of the society as ‘unreal people’.

The second thing they do is start disrupting the rationale and terrorise the political language. They come to the political stage with an almost schizophrenic logic. For example, you are talking about climate change or global warming, and suddenly they speak about the earth being flat. The strategy they use catches you off-guard and simple dialogue becomes impossible because they attack the rules of logic when they are talking. They operate in two ways: with spin doctors of the party or the movement and the apparatchiks. They invade the social media sphere, and they do not argue with you but make it impossible to argue. They attack the communication sphere to the extent that you cannot even exist there. The unregulated communication sphere, the social media, makes it easier for them to turn the truth to a commodity which goes to the highest bidder.

The third pattern repeating itself in every country is that they are using the post-truth era very effectively. The loss of shame or shamelessness is a political tool used very effectively by the right-wing populists. In western countries and among journalists, post-truth and fake news are seen as technical issues; they think that if they fact check and prove fake news is ‘fake’, it can be destroyed. Temelkuran believes post-truth is not a technical question but a moral question. When you don’t know what truth is, you won’t know what is right or wrong morally. So, the loss of truth and loss of shame are interrelated.

The fourth pattern repeating is dismantling the judicial and political mechanisms. Right-wing populists or authoritarian leaders or this new form of fascism has no constant ideological consistency. Temelkuran is sceptical of making references to the Second World War and the Nazis when talking about this new form of fascism. Like it or not, the Nazis had an idea and political goal for what they wanted to do. The authoritarian leader now has no ideological consistency and political goal beyond holding on to political power. This is the most ruthless form of pragmatism.

The fifth common pattern is that they design their citizens from the very beginning. ‘Erdogan Supporters’ or ‘Boris Johnson Supporters’ or ‘Trump Supporters’ are very similar even though they speak different languages and are from other countries. It is as if they are cut from the same cloth. The supporters of right-wing populists are highly adaptable people, and this is because their leaders are highly pragmatic.

The sixth commonality is the use of political humour as a tool for opposing the right-wing populist. This is a useful tool up to a level, but it can become a shelter for comfort because people feel okay as long as they can joke about it. While we are making jokes, the authoritarian leaders are creating new regulations in our lives. Lack of voice is filled more and more with laughter.

The seventh and last commonality is designing your own country. It is the ‘love it or leave it stage’, and Turkey is in this stage at the moment. Those speaking up against the leader are eliminated.

This new form of fascism is one reason why we are losing the world as we know it. The other reason is the planet being exhausted by capitalism. The earth is speaking through all its tongues and shouting out for help, and we are calling this ‘global warming’, but it is more than that. The world is tired because this system extracts everything: it extracts life from human beings, minerals from earth and water from the sea. The greed and the pillars of capitalism cannot go on. We cannot imagine the end of capitalism easily and because of the new form of fascism and planet being exhausted, what we are living is predominantly fear, and that is what fascism lives on. We need to befriend our fears because we will be living in fear for several reasons in the coming decades. In future, what Temelkuran wants to talk about is how can we repair the faith in human beings and ourselves.

Shabi asked for a comment on the exceptionalism of the US and the UK. Temelkuran said the book was published two years ago and when the book first came out, she was telling Americans and British that Trump will be here for a while and Boris Johnson will be your PM so get used to it. She mentioned that fascism feeds on fragile consensus, and it leaks into cracks and opens them up. Some people say what is happening to us is a passing thing. The second group of people say this is the natural consequence of neoliberalism because capitalism’s main contract compromised the main contract of democracy. Some people say that social justice is not necessary for democracy, but the second group of people that Temelkuran feels close to think there cannot be democracy without social justice. She commented that the most important part of Trump’s departure was that the entire American establishment had to come together to get rid of him and still he got 70m votes. It is not the democratic institutions or the state that is disintegrating but also the society. Half of society thinks the other half is absolute evil.

Shabi then asked about the left’s response to right-wing populism and whether it has been effective. Temelkuran mentioned how the Labour Party is becoming patriotic and flag loving, which reminded her of the CHP in Turkey trying to prove that they are genuine Muslims. She thinks we need to reject the mentality of the new form of fascism altogether. Then she referred to expressing emotions and how they have no use for countering right-wing populism. Instead, we need to organise, stand our ground and develop proper and polite argumentation.

The talk continued with questions from the participants.

Rachel Shabi an award-winning journalist, author and broadcaster, has reported extensively on the Israeli-Palestinian conflict and the wider Middle East, from the war between Lebanon and Israel in 2006, the Gaza war of 2008 and the uprisings in Egypt and Tunisia. She has written for a variety of international publications, including the Guardian, The New York Times, The London Times, The Independent, Al Jazeera English, Foreign Policy, The New Statesman, Prospect and The Nation.