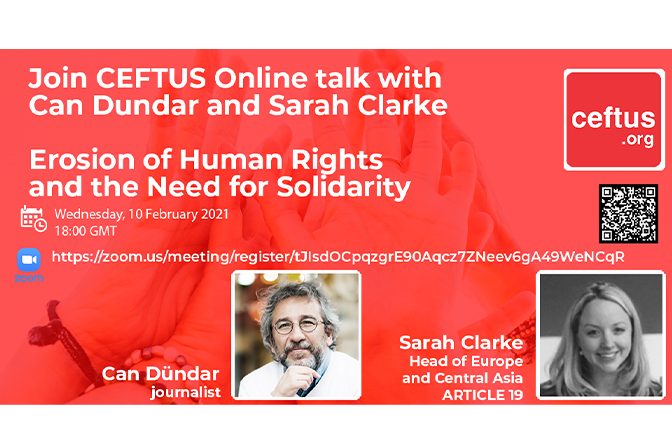 The event featured a conversation between Sarah Clarke, Article 19’s Head of Europe and Central Asia Team and Can Dündar, a distinguished Turkish journalist. Clarke started by highlighting the scale of the erosion in freedom of expression in Turkey during the past decade and then introduced Dündar.

Clarke’s opening question was about the rise of illiberal democracies globally. She again highlighted that the increase in Turkey’s human rights violations had been a significant concern in the past decade. She asked Dündar to reflect on his personal experiences after he published the articles in Cumhuriyet and why has he been a challenge for an autocrat like Erdogan?

Dündar began by mentioning that he has been a journalist for 40 years, and in that period, he has never experienced proper democracy in Turkey. Still, the conditions have never been as bad as they are now. He has been targeted because he had written articles that Erdogan didn’t like, and this began in 2013 when Dündar was covering the Gezi Park protests. Erdogan told Milliyet’s owner to fire Dündar, who then joined the NTV channel as a presenter of a news show and made a documentary about Erdogan’s corruption. Erdogan filed a lawsuit against Dündar, and he moved to Cumhuriyet, where he continued to cover Erdogan’s corruption. He wrote a series of articles on Erdogan and a Saudi businessman’s attempts to appropriate land in Istanbul. Again, Erdogan didn’t like the article and filed a lawsuit. Dündar was the Editor-in-Chief of Cumhuriyet, and the paper published an article about the Turkish intelligence services transferring guns to Islamist fighters in Syria, which angered Erdogan. On the day after the article was published, Erdogan vowed that the person who published the article ‘will pay a heavy price’.

Clarke then asked about the factors that enabled Erdogan to come to power and stay in power for so long?

Dündar mentioned that Erdogan is not a unique case and is part of a global trend. The feelings of fear and instability that became pervasive after the Cold War created the conditions for Erdogan’s emergence and provided opportunities to consolidate his authoritarian rule. In recent years, the refugee issue allowed Erdogan to strike a deal with the European Union (EU). The European leaders accepted to turn a blind eye to Erdogan’s ‘excesses’ in exchange of keeping refugees in Turkey.

Clarke mentioned the increase in detention of journalists and human rights activists. She said how the European Court of Human Rights’ decisions had not been implemented by Turkey, particularly in the case of Selahattin Demirtaş and Osman Kavala. The reason behind the decision not to enforce the judgements is because Turkey does not have a price to pay. She drew attention to some of the recent elections where Erdogan managed a win with a small margin, but he has managed to hold on to power despite that.

Dündar said that Erdogan had consolidated his one-man rule and now controls every institution in the country. He mentioned the second-largest opposition party leader in Turkey is currently in jail as are many of this party’s MPs. Erdogan controls the media, the police force, the army, the business community. He has the backing of the Western leaders, and that means Erdogan does not fear anyone. The refugee flow helped him, as did the Trump administration. Erdogan played Russia against the US and managed to balance the power competition to his advantage.

Dündar argued that following Biden’s election there is now a swing towards democracy. He believes that the policies will change but maybe not a very dramatic change at the beginning. Erdogan has been waiting for a call from Biden, which is yet to come. Also, without Merkel, the conditions Erdogan faces will not be the same in Europe. Crises situations have helped Erdogan remain in power and have made it easier for him to run the country. Now that tactic will not work. Erdogan also lost the big cities in the last local elections, and now he faces an alliance of opposition parties, which creates hope for people who want democracy in Turkey.

Clarke talked about the issue of solidarity and asked about Dündar’s efforts to challenge Erdogan’s regime by building solidarity inside and outside Turkey.

Dündar responded that he now believes the West can see Erdogan’s real face. He said he is now in Europe and free to talk and does all he can to talk about what is happening in Turkey. He mentioned he wrote a play about what is happening in Turkey; he is writing for German media and reaching out to people via social media. Many Turkish people have come to Europe recently, and they are thinking about establishing institutions to campaign for democracy in Turkey. He referred to how the German opposition figures came to Turkey during the 1930s and tried to establish a radio station to reach people in Germany. He emphasised the need to do the same for Turkey now.

Clarke remarked that the exiled academics have an essential role in building the rule of law and democratic institutions in Turkey. She asked about Dündar’s play and the response it has got from around the world.

Dündar said people at the Royal Shakespeare Company were surprised that a journalist could be imprisoned, but many people can relate to his story. He mentioned the prison cell he was kept in had been recreated at the Gorky Theatre in Berlin. People can visit the cell and see how the prisoners are being held in the Silivri Prison. He is also exhibiting how the people that are imprisoned are communicating.

Clarke remarked about the artistic production of people in prisons being very impressive. Dündar mentioned Erdogan’s popularity declining, and now it was clear that he will go, but no one knew when or how.

Clarke read a question from a participant who asked, ‘What will it take for Erdogan to go?’

Dündar replied that Erdogan has been good at ‘selling dreams’ and mentioned how he recently came up with a plan to send a Turkish space mission to the Moon by 2023. He referred to Turkey’s massive police presence and how people don’t have the means to protest.

Another participant asked about Bogazici University students and staff’s protests and whether the government will reverse its decision to appoint a rector?

Clarke read another question from the participants about the UK’s response to Turkey, how it remained silent, and whether this was concerning?

Dündar said that the previous British PM visited Turkey just before an election, and she said nothing about the decline in the state of democracy, human rights or the rule of law in Turkey. She talked about nothing except arm sales to Turkey. Dündar said this was a disappointment to many people in Turkey and that the UK is not alone in behaving in this way. Germany behaves in a very similar way. He referred to Erdogan being capable of convincing Western states that everything is under control.

The event continued with further questions from the participants.

Can Dündar has been working as a journalist for the last 37 years, for several newspapers and magazines. He produced many TV documentaries focusing particularly on modern Turkish history and cultural anthropology. He worked as an anchorman for several news channels. He stepped down from his post as the editor in chief of the daily Cumhuriyet in August 2016, after he was sentenced 5 years and 10 months of imprisonment due to his story on the Turkish Intelligence Service’s involvement in Syrian war. He is a columnist for German daily Die Zeit and commentator for the German radio channel WDR’s Cosmo. He founded the news website called #Özgürüz in exile. Dündar has been nominated as a candidate for the Nobel Peace Prize in 2017. He is the writer of more than 40 books, one of which, WeAreArrested was published in England in 2016.

Sarah Clarke joined ARTICLE 19 in January 2019 as Head of the Europe and Central Asia team, defending the human rights to freedom of expression and information in the region. Between 2012 and 2018, she led PEN International’s policy and advocacy work, overseeing its engagement with the UN and regional human rights mechanisms and governments. She is the author of numerous country-specific and thematic reports concerning legal restrictions on free expression and the protection of writers and journalists at risk. She has a particular interest in freedom of expression in Turkey, where she has led numerous advocacy missions, trial observations and the amicus interventions on the priority cases of journalists before the European Court of Human Rights. She regularly publishes, lectures and gives trainings on a variety of freedom of expression issues.