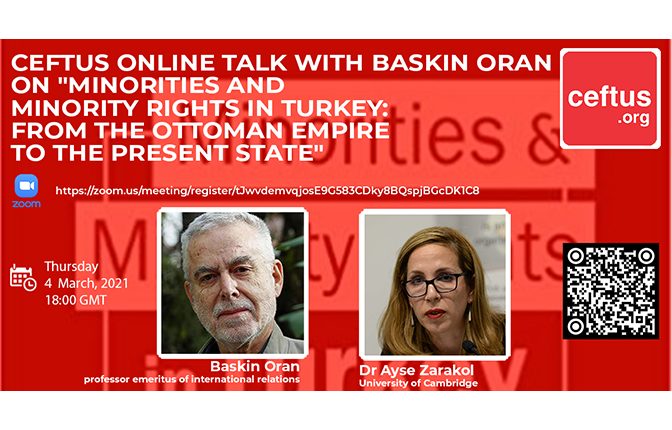 Minorities and Minority Rights in Turkey

Dr Ayse Zarakol, Reader in International Relations at the University of Cambridge, introduced the speaker and briefly mentioned some highlights of Prof. Baskın Oran’s distinguished and long academic career. She also briefly talked about CEFTUS and the work it does. The event focused on the issue of minority rights in Turkey, which has been an important and challenging political issue in Turkey since the establishment of the republic in 1923.

Prof. Oran mentioned that his new book, Minorities and Minority Rights in Turkey: From the Ottoman Empire to the Present State, represents the end product of his studies on minorities, which he began after completing his PhD in 1974. He said that the new book builds on his recently published Turkish language book, Etnik ve Dinsel Azınlıklar (2018). The book is a shortened version of the Turkish language book, but some sections have been further developed and are more detailed. He has removed the general information that an interested reader might find in other books. Still, he has provided more details of minorities in the Ottoman Empire and Turkey that are not readily available in one book.

In the third chapter, Prof. Oran offers a map of minorities in the Republic of Turkey. He distinguishes between the non-Muslims whose rights are recognized by the Turkish state, such as the Greek, Armenian and Jewish minorities, and to a certain degree, the Syriacs and Yezidis. He then looks at the situation of the ‘Muslim’ ethnic groups, such as Kurds and Alevis. They are accepted as minorities according to international standards but not officially recognized by the Turkish state.

Chapter four is devoted to Turkey’s international obligations regarding minority rights. Prof. Oran begins the chapter by highlighting the minority related provisions of the Lausanne Treaty and considers the problems of implementing these provisions. He said the treaty recognized only non-Muslims as minorities, but it also recognizes language rights to all Turkish citizens and these rights were never implemented. Then he examines Turkey’s resistance to minority rights and human rights conventions adopted by the UN and signed by Turkey with reservations attached.

In the fifth chapter, Prof. Oran examines the current body of law on minorities in Turkey. He said the category ‘Turk’ is a national category and ethnoreligious because only Muslims can be a Turk. He looks at the problems with the implementation of rights for various minority groups in Turkey.

In the sixth chapter, Prof. Oran examines what the recent minority rights reforms changed in Turkey and how they have been implemented. He looks at the reforms on the rights of Alevis, Kurds, and non-Muslim groups. He also examines the process of deviation on these reforms and the new laws that were introduced that undone the gains previous reforms made. In the seventh chapter, Prof. Oran examines the ideology behind the repressive and discriminatory policies shaping minority rights in the current period. In chapter eight, Prof. Oran summarizes the culminating impact of issues and policies discussed in the book and assesses their future development for both the state and the people of Turkey.

Dr Zarakol asked about the impression people have of the Ottoman Empire being much more tolerant than other empires. She wondered if that notion was true or not.

Prof. Oran mentioned that it was not an impression but a fact that was not unique to the Ottoman Empire. All other classical empires were the same. Generally, empires did not interfere in the lives of their minorities as longs as they were not challenging the empire’s authority and paid their taxes. Also, their resources were not sufficient. He mentioned that colonial empires also did not use a policy of assimilation but for other reasons.

After Sultan Mehmet the Conqueror’s conquests in Europe, he soon realized that 60 per cent of the empire’s population was Orthodox, and he quickly realized that he could not rule his subjects via Sharia Law. Hence, he opted for the Millet System, which recognized the Ottoman population’s differences and allowed them autonomy in their affairs. Prof. Oran provided further details of how the Millet System was established and how it was functioning. He then described the changes concerning the management of the minorities during the republican period. He mentioned that the assimilation of Muslim populations, such as the Kurds and Circassians and others, into Turkishness, was one aspect of the approach. The second aspect, he said, involved eliminating the non-Muslim minorities in Turkey, which were considered incapable of assimilation.

The event continued with further questions from Dr Zarakol and the audience.

Ayşe Zarakol is Reader in International Relations at the University of Cambridge and a fellow at Emmanuel College.

She is the author of After Defeat: How the East Learned to Live with the West (Cambridge University Press, 2011), which was selected by the Russian newspaper Republic as one of the books one must read in order to understand the twenty-first century.

Her most recent book is Hierarchies in World Politics (Cambridge University Press in 2017).

Zarakol is an active member of the PONARS Eurasia international academic network which advances new policy approaches to research and security in Eurasia.

Zarakol has held visiting fellowships with the Council of Foreign Relations, the Norwegian Nobel Institute and the University of Copenhagen.

She occasionally blogs on Turkish politics for the LRB website.